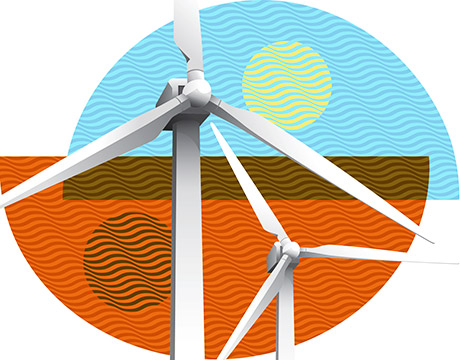 On the long journey home from Troy, Odysseus and his crew make a month long pit stop at the island of Aeolia. When they’re finally ready to leave, Odysseus is given a most useful parting gift: A leather bag full of wind.

This was not merely some whimsical notion on the part of Homer. For men of the sea, wind was power. Ancient sailors stuck in the doldrums must have wished they had some method to store wind for when it wasn’t there.

We’ve got the same problem now. Though wind power is clean and plentiful, we can never rely on it alone, because it isn’t always there. Storing that energy with current battery technology requires a large initial investment that’s not feasible in the current electricity market. And there are end-of-life issues for batteries that have to be dealt with if we’re to keep things sustainable and ecologically sound.

If only we could stuff that wind in a bag.

Now we can, thanks to researchers from multiple universities and institutes in Europe working together on the RICAS2020 project (RICAS stands for Research Infrastructure related to Advanced Adiabatic Compressed Air Energy Storage). Only it’s not bags they’ll be using, but abandoned mines.

In fact, Germany and the U.S. each have an underground compressed air facility. But they have very low efficiencies because they need to heat the air as it expands to spin the turbines on the way out. They currently burn gas to do so, keeping efficiencies in the 40-to-50-percent range.

SINTEF’s solution is to use an initial chamber filled with rocks. As the compressed air passes through this chamber, it heats the rocks before it is stored in the final cavern. The rocks stay warm for 24 to 48 hours. When the air is extracted, it passes back through these rocks to recover the heat required for the correct expansion in the turbine. According to SINTEF’s mathematical models, the method should bring efficiencies up to 70 percent.

Reheating the air as it leaves is only one challenge. Controlling it so it leaves where and when you want it to is another. Just how it’s done depends on the kind of rock. “One of the most important things is to be sure of what kind of rock you have and its geological condition,” says Perillo. “If you know the rock quite well, it’s normally quite easy to do such things.”

Salt mines, for instance, are gas-tight. And, conveniently, they can easily be molded into whatever shape might be desired by pumping water in and out. The only problem is that there simply aren’t many of them, especially in the U.S. In Northern Europe much of the rock is hard and airtight, but in Central Europe, rock conditions are less than ideal for storing gas.

So Perillo and his colleagues are developing a rubber-like coating that can be sprayed onto the walls of a mine. Again, it’s not the concept that’s difficult, but keeping the costs down.

SINTEF, together with the other partners involved in the RICAS2020 project, is now working towards its final goal of creating two compressed air batteries systems. One would be a small demonstration facility, while the other would be full scale, supplying 100 megawatts of power for eight hours. The larger facility would use 250,000 cubic meters of volume, all of which would have to be coated with the SINTEF lining solution.

If all goes according to plan, SINTEF’s gift to the world will easily outdo Odysseus’s leather bag.