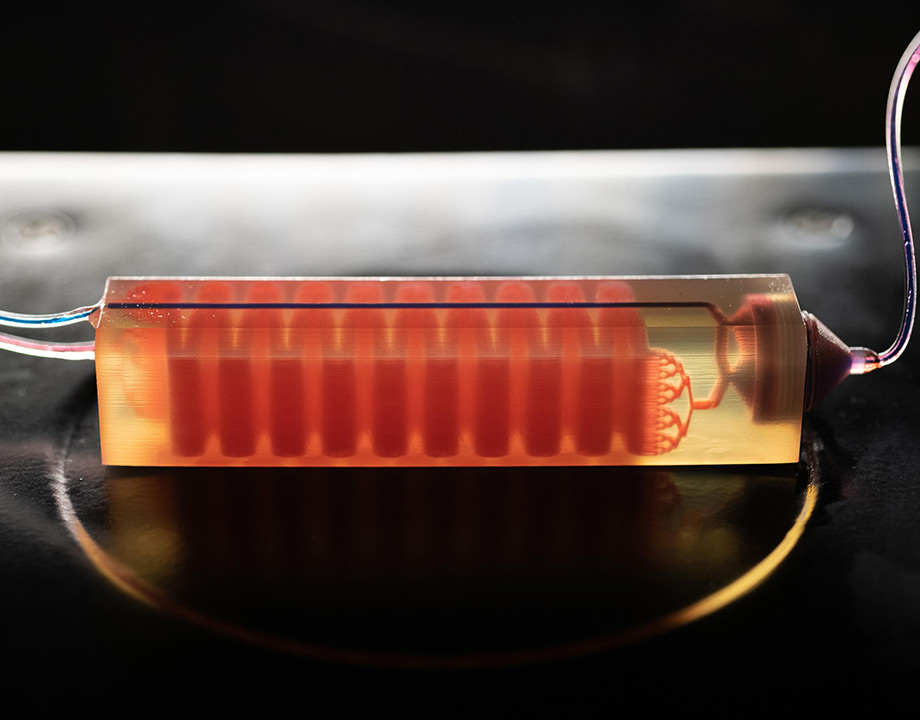 Fatih Sarioglu’s ultimate goal was to apply his engineering skills to an important bioengineering problem, even though he focused on micro and systems engineering and became an expert in building tiny devices for seeing things on an atomic scale. It wasn’t long before a stint as a researcher at Harvard Medical School presented him with an opportunity. There, he began applying his device-building skills to find a faster and better way to diagnose cancer and monitor tumor cells in patients.

Fast forward a few years, and he is leading a team in his Biomedical Microsystems Laboratory at Georgia Institute of Technology that has developed a novel approach—a liquid biopsy method—to finding even just a handful of evasive cancer cells.

This approach relies on a custom-designed 3D-printed ‘trap’, and helps with the initial cancer diagnosis and with frequent monitoring to provide early warnings of any recurrence or metastasis.


Current clinical practice for diagnosing cancer in a patient with symptoms starts with imaging. If the primary tumor is large enough, it shows up on the scan. Then a follow-up surgical procedure takes place, and the tissue is sent to a lab.

This means that any renegade cancer cells, those that may have already metastasized— in other words, sent to other parts of the body—are not included in the biopsy sample.

A treatment such as chemotherapy can kill the first round of cancer cells, Sarioglu said, but there is typically a second or third round that often doesn’t respond to the chosen therapy because those cells have mutated. 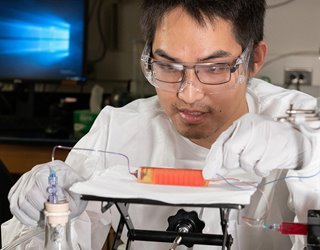 Chia-Heng Chu adjusts the cell trap in the laboratory. Photo: Allison Carter, Georgia Tech
These renegade cells are often found hiding among billions of blood cells in a patient’s blood sample and are exposed by the cell trap the team has designed.

The trap captures white blood cells and filters out red blood cells, leaving cancer cells exposed to analysis and diagnosis. The researchers say it’s like finding a “needle in a haystack” by removing all the hay and discovering the needle.

Many devices have been developed to capture circulating tumor cells. They use microfluidic technology to recognize specific markers on the cancer cells, but none have been very efficient and often damage the cells that are captured.

One reason for their inefficiency is because a secondary group of cancer cells often mutate as they move to other parts of the body and don’t respond to the initial therapy.

“At that point, we don’t know what to give the patient the next time,” Sarioglu said. “We have a lot of molecular drugs and therapies in the pipeline that will shut down certain genes, but we just don’t know which gene is active at this point.”

Sarioglu’s microfluidic technology is essentially reversing the process by removing the good cells to isolate the tumor cells, overcoming the shortcomings of earlier devices.

Such blood serum testing can provide key snapshots, Sarioglu said, allowing rapid and low-cost separation of tumor cells circulating in the bloodstream. As a liquid biopsy tool, it will require minimal processing of blood samples, eliminating the need for specialized technicians in a lab and generally producing a faster result, he added.


How Do the Cell Traps Work?


The trap is described as a 3D-printed device consisting of 32 stacked microfluidic layers of zig-zagging channels with overall dimensions of 100 mm by 20.5 mm by 19.2 mm.

Those channels are lined with antigens, which increase the chances of white blood cells coming in contact with one of the walls, where they are captured. The remaining red blood cells pass through a commercial filter, leaving behind the tumor cells. 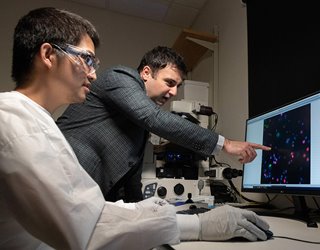 “Capturing these tumor cells is in itself a big challenge,” he said. “Because there are billions of blood cells, you need an engineering tool, a technology that can screen the cells one by one. You cannot miss even one cell. Typical lab techniques don’t work.

“The other problem is that cancer cells constantly mutate, so you can’t rely on one type of marker to distinguish them from the other cells, even from blood cells, and they can sometimes hide very efficiently between the blood cells.”

So the team chose to target regular blood cells since a lot more is known about them. The next question was how to capture them. “There are just so many of them, and you need a large surface area,” Sarioglu said. “If you put a tube of the blood of them on a slide, one by one, you would need window-size glass slides.”

Usually, microfluidic devices have a single layer with channel heights of about 50 to 100 microns, and channels are etched out. 3D printing would allow for a much larger surface area for capturing white blood cells by creating many more channels in a vertical buildup. This would increase the likelihood that every white blood cell would come into contact with a channel wall.

However, 3D printing also brought another significant challenge: How to get rid of the sacrificial filler, a solid hard wax required to allow more channels to be built vertically.

“We tried a bunch of different ways using traditional medical tools in bio labs” and ended up with a standard centrifuge that removes the hard wax by heating the trap and spinning it to extract the then liquid wax from the channels.

“That was a manufacturing challenge that we had to work on,” Sarioglu said. The size of the device, which can be scaled larger, was limited only by the size of the centrifuge used for proof of concept.

The channels then received the antigen coating. Once the white blood cells were removed, the smaller red blood cells could be filtered out with a commercially available filter, isolating the tumor cells.

The next steps include narrowing the channels in the device to boost the percentage of white cell extraction, as well as various other ways to increase trapping capacity. Clinical studies are also planned.

Sarioglu said this was such a meaningful breakthrough for him. “This is what I am living for in a way: You spend time to think of something, work hard to realize it, and at the end you see it working with the idea that it will help people,” Sarioglu said. “That’s why I made the transition from just building sensitive tools and engineering devices to things that can help people and impact their lives.”

Nancy S. Giges is a technology writer based in New York.