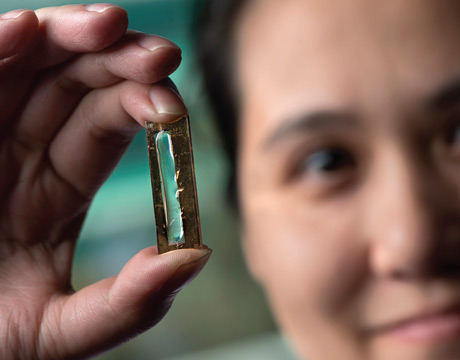 If Mya Le Thai has her way, the lithium-ion batteries that power your smartphone and other mobile devices will last forever.

Thai, a doctoral candidate in chemistry at the University of California, Irvine, and her team developed a material from gold nanowire that recharged more than 200,000 times with no loss of capacity or power. Most nanowire-based batteries typically die after 5,000 to 7,000 cycles.

Thai used her material in a 1.2 volt capacitor, which shares the same chemistry as a battery. The capacitor could have withstood countless more cycles, but she grew tired of running the tests and pulled the plug after three months. “I didn’t want to wait anymore,” she said.

Researchers have been probing nanowires, which are thousands of times thinner than a human hair, for years. Nanowires have a higher surface area than films of the same material used in capacitors and lithium-ion batteries, and can therefore handle more power. But heat generated in the devices causes those fragile wires to expand, turn brittle, crack, and delaminate, shortening the life of the device.

Thai drew from her background in materials science and energy storage to build a capacitor with longer nanowire life. She created the capacitor from a gold nanowire to transmit electricity and coated it with manganese dioxide, which is commonly used as a cathode in batteries.

To prevent the wires from degrading during thermal cycling and to prolong the life of the capacitor, Thai covered them with polymethylmethacrylate (PMMA), or Plexiglas. In gel form, PMMA is not only strong, it is also an electrolyte.

In a series of tests, Thai discovered that decreasing the gel’s viscosity increased its conductivity. Balancing conductivity and protection was key. “It took two or three tries to get the percentage right,” to reach 200,000 cycles, she said.

PMMA is clearly the secret sauce, and Thai is still trying to figure out exactly why. She has several theories. On one hand, the viscous PMMA blocks the manganese dioxide from pulling away from the gold nanowires during thermal cycling.

In one experiment, Thai noticed that after several weeks, the gel had permeated the manganese shell, where it acted as a plasticizer. Its elasticity prevents the shell from cracking and breaking down during heating and cooling.

The team is conducting more research to reduce the amount of gel needed without decreasing the capacitor’s performance, and to increase its voltage, energy density, and charge. “There’s the possibility it will take a lot more engineering work to make this better,” Thai said, adding that lithium-ion batteries made from the material could hit the market in five to 10 years.