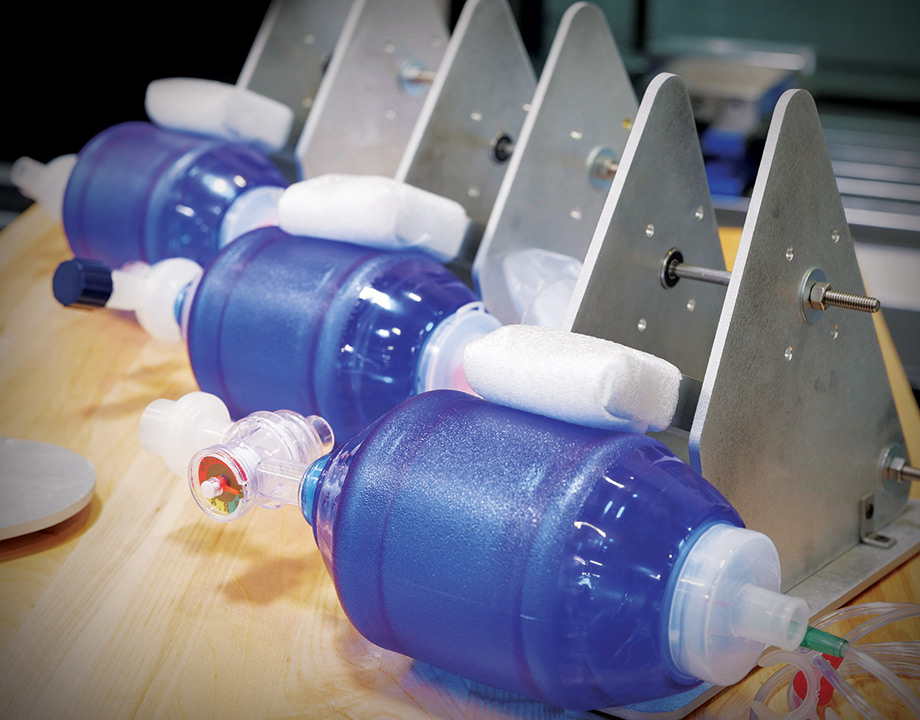 Coronavirus swept across the world this spring, shutting down businesses, isolating people, and overwhelming hospitals. In response, engineers, manufacturers, and do-it-yourself makers pivoted to designing and producing personal protection equipment and much-needed medical devices. For instance, auto manufacturers teamed with medical device firms to produce a large volume of suddenly scarce ventilators. Others looked to fill in the supply gaps faster, with simple machines that can help patients not as severely affected by the virus.

In the early part of the crisis, ventilator demand severely outstripped supply. In California, satellite launcher Virgin Orbit tapped its staff of aeronautical engineers to design and build a simple bridge ventilator, a machine that can be used to treat those with lesser effects of the virus, freeing ICU ventilators for patients with urgent needs. 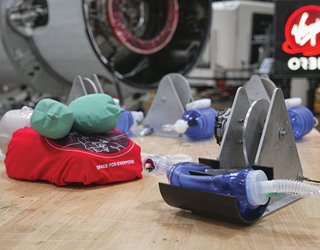 Virgin Orbit won emergency approval from FDA to use bridge ventilator for patients with mild cases.
“The group was looking for industrial commentary,” said Kevin Zagorski, lead engineer for Virgin Orbit. “We came out of the meeting and said, ‘We can build one of these, and make it simple and manufacturable.’ ”

Zagorski said the group worked off of an AMBU (artificial manual breathing unit), a device commonly used by emergency medical technicians that essentially is a hand-operated resuscitator. The bag fills with oxygen and is fed to patients through a mask.

“We devised a novel and very manufacturable way to compress that bag mechanically,” he said. “It is a mechanical compression method controlling the rocker arm that presses on the bag. At its core, it is a mechanical replication of a human hand,” mimicking the manual operation of the AMBU bag, he said.

The device is powered by a common windshield wiper motor, one of a variety of off-the-shelf parts and materials sourced by the team. It drives a small caster wheel that presses the bag and controls airflow.
The device is fitted with potentiometers that control respiration rate, the volume of oxygen, maximum pressure, and time to inhale. “We had to go very basic: mechanical assemble with two-dimensional water jet cut plates, standard bearings, 3-axis very basic machining,” he said.

Zagorski, whose day job is propulsion advanced manufacturing group manager in Virgin Orbit’s advanced manufacturing group, leads a fluid team of 30 to 40 engineers that include some with experience in medical devices. They provided valuable feedback on incorporating items such as alarms for loss of power. All of their work has been done in tandem with their normal workload, keeping team members on the job for weekends and long hours to get the device to market quickly.

“We’ve reached out to medical advisors on a daily basis, but some of our struggles have to do with consideration of the supply chain,” he said. “We’re striving to make this as manufacturable as possible. We’ve been ruthless in considering every component; is it really necessary in this design?  At volume, you want to be simple. The hardest part is, can you not only scale design but also scale immediately? In southern California, there is a ton of capable manufacturing available, so you can scale in parallel by working with other people as well.”

The team has been working since March to design the device and build a prototype, refining the design to demonstrate manufacturing capability. Zagorski said they are working to produce 100 devices a week as a benchmark at Virgin Orbit’s Long Beach, Calif., manufacturing plant, and hope to scale up, at least doubling production soon after.

The test runs are expected to verify the simplicity of the design, key to bringing in other manufacturers to boost production, he said. It also differs from production of more intricate, high-end ventilators that require more advanced manufacturing processes.

Virgin Orbit received FDA approval for Emergency Use Authorization in April. The firm manufactured its first batch in-house for immediate shipment to hospitals. It also is partnering with local and international manufacturers to expand production.