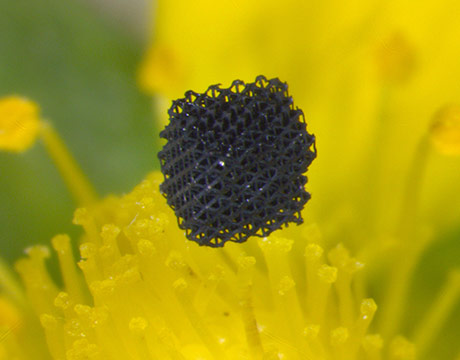 Graphene is one of earth’s strongest materials. Because of its high electric and thermal conductivity, it is sought by a variety of industries, from aerospace to battery manufacturing. But printing objects with graphene is limited because it can only be printed in basic structures or in 2D sheets. That is now changing as researchers at Virginia Tech and Lawrence Livermore National Laboratory have developed a process to 3D print complex objects of graphene at a resolution much greater than before.

The breakthrough will allow a designer to produce 3D topology made of interconnected graphene sheets, notes Xiaoyu Zheng, an assistant professor of mechanical engineering and director of the Advanced Manufacturing and Metamaterials Lab. In turn, that will lead to an optimization of strength, conductivity and weight density not previously achievable.

Regular graphene consists of a single layer of carbon atoms arranged in a honeycombed hexagonal pattern. When layered, it becomes graphite commonly used in lead pencils. But the layering also makes the substance brittle. Zheng’s team solved that problem by separating the layers with air-filled pores, maintaining its original integrity.

For You: How Additive Manufacturing Will Transform the Supply Chain

The result is something called graphene aerogels, porous graphene structures fitted with air-filled pores, and they provide better mechanical properties. Ryan Hensleigh, a macromolecular science and engineering Ph.D. student, began working with Zheng on the project three years ago when he interned at Lawrence Livermore under Zheng. When Zheng moved to Virginia Tech, so did Hensleigh.

“It’s a pretty significant breakthrough,” Hensleigh says. “When we started, we didn’t have a great idea about how to go about it.”

“Pristine graphene is one of the stiffest materials ever measured, but graphene foams experience such massive degradation in mechanical properties that they are worse than polymer foams at low densities,” notes Hensleigh and other authors of a paper explaining the technique published in the journal Material Horizons. “3D-printed mechanical metamaterials have shown the unprecedented ability to alleviate such degradation, but all current graphene foam 3D printing techniques are unable to produce such complex metamaterial architectures due to insufficient resolution and toolpath limitations.”

When work on the project began, graphene was generally printed through an extruder that produced log pile structures. The type of structures created are limited because resolution is limited, along with support. “They just simply could not support [their] own weight,” Hensleigh says.

The breakthrough allows graphene to be designed into any shape with a very high resolution. The new technique is compatible with a desktop SLA printer and achieves an order-of-magnitude finer resolution and far more intricate structures than any previous method, according to the paper. “This technique opens new possibilities not only to enhance graphene foam mechanical properties, but to explore complex architectures and mesoscale effects for other graphene applications including energy storage and conversion, separations, and catalysis,” the authors wrote.

“We really did this through trial and error,” Hensleigh says.

He began by working with graphene oxide, a precursor to graphene, and crosslinked sheets of the material to form a foam, or hydrogel. Then he “broke that into small pieces” with ultrasound and added light-sensitive acrylate polymers. The graphene oxide became trapped within the rigid chains of the polymer, allowing a solid 3D structure to be created through projection micro-stereolithography.

The structure’s polymers were then burned off in a furnace, fusing the object together and producing a pure, lightweight aerogel. Using this technique, designers can print an object to 10 microns in resolution compared to others that print to 100 microns, Hensleigh says. Ten-micron resolution approaches the actual size of graphene sheets.

It now takes a week to two weeks to make the material, but the actual printing is finished within two hours. “Remember, the parts are pretty small, a few millimeters on each side,” he says.

More work is needed before printing graphene at home becomes feasible but the researchers are excited about the possibilities. The high-resolution, intricate structures not only allow the fabrication of arbitrary form factors for a plethora of applications but can improve graphene foam properties at increasingly low densities, according to the paper. “[Micro-architected graphene’s] essentially unlimited design space, high surface area and electrical conductivity paves the way for exploring mesoscale architectures for advanced 3D graphene applications including catalysis and separation platforms, tunable thermal conductivity, and fluid flow among others,” the authors wrote.

“There’s a lot of interest in ultra-low thermally conductive material, and even bone tissue engineering,” says Hensleigh, adding that he wants to pursue applications in battery electrodes. Energy storage and conversion is one of the areas where graphene applications shows the most promise.

Read More:
Hear Episode One of Our New Podcast: Building the Case for a Diversified Workforce
Raspberry Pi’s Eben Upton on Design and Innovation
Smart Bandage Does It All

For Further Discussion
It’s a pretty significant breakthrough. When we started, we didn’t have a great idea of how to go about it.Ryan Hensleigh, Virginia Tech