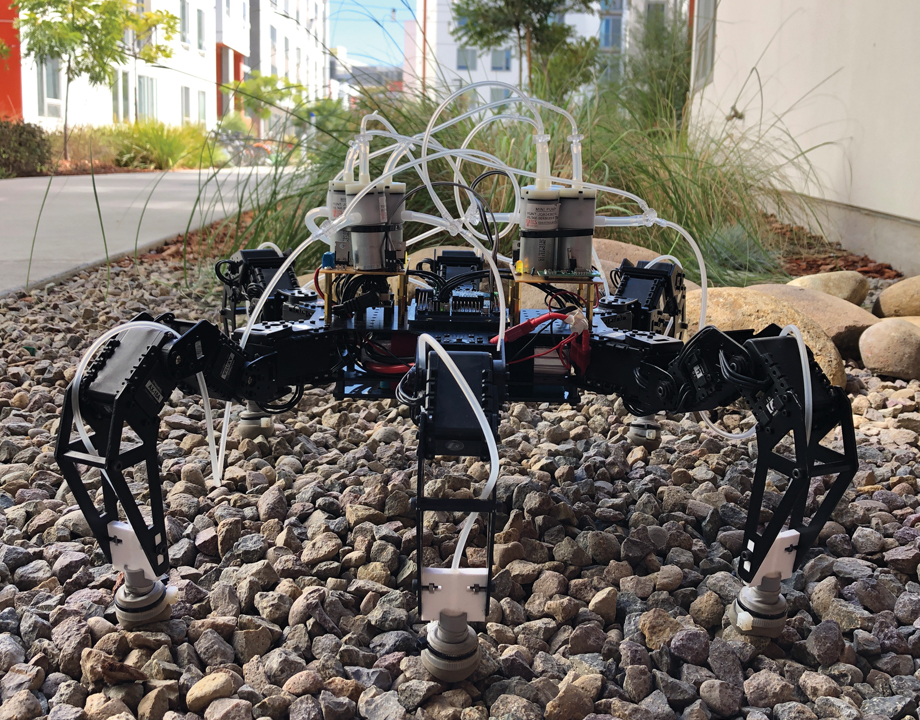 UCSD have changed the world of robot pedal-power by creating shoes that will increase the performance of any bot that slips them on. Photo: UCSD

Roboticists focus on gaits, joints, and architecture to get robots moving across ground as efficiently as possible. But robot feet get short shrift. As a result, the typical robot is designed to expertly traverse one kind of terrain and is left to bumble, trip, or get stuck over others.

Now, researchers from the University of California San Diego have changed the world of robot pedal-power by creating shoes that will increase the performance, over any surface, of any bot that slips them on. Their key to the new bionic booties: granular jamming.

The UCSD team wanted to “improve robot performance in environments where they traditionally don’t function too efficiently, such as most natural terrains,” said Emily Lathrop, a graduate student at the Jacobs School of Engineering at UCSD, and the lead author of the resultant paper.

So they started experimenting with adding soft appendages to robot extremities.


One early prototype used silicon embedded with a magnetorheological fluid—magnetic particles suspended in oil. The stiffness of the foot could be tweaked by varying the intensity of the magnetic field. But the magnetic particles kept separating from the oil. So Lathrop and her colleagues turned to more familiar particles: coffee grounds. 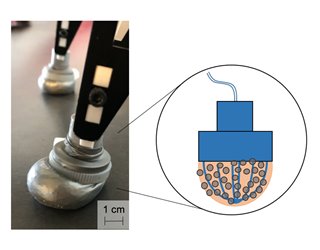 The little sacks on the feet of this robot help it traverse any terrain—and faster. Photo: UCSD
The new boots were not unlike those stress balls or grip strengtheners once found in gift shops everywhere—essentially a balloon filled with ground coffee, precooked. Though grounds flow liquid-like when unconstrained, when trapped by latex they hold their shape when compressed. The team outfitted the six feet of a commercially available hexapod robot with coffee-stuffed latex pods. When the grains in the latex feet hit the ground, they jam up to fit the surface they’re on.

Editor’s Pick: Georgia Tech's SlothBot is Engineered to be Slow

The weight of the robot is enough to effectively jam the granules and make the robot a more efficient crawler, but to make the feet even stiffer when encountering a surface, Lathrop and her team used pneumatic pumps to evacuate the balloons. “The hardest part was making sure that all the components of the foot and ankle attachment were airtight, to create a tight seal for the vacuum,” Lathrop said.


The java sacks improved the robot’s locomotion considerably. Compared to results using its original feet, the robot sank 68 percent less in sand, needed 98 percent less energy to pull its legs out of sand, and increased its forward speed by 40 percent.

Though the “active jamming” proved generally more effective than the passive, pneumatic-free sort, the energy it takes to run the pumps sends the cost of transport sky high. “In contrast, passive jamming requires no extra power from the robot, making it an efficient way to increase robot performance without any power consumption trade-offs,” Lathrop said. “There were a couple of cases we were surprised by, such as how passive jamming performed equally to active jamming over loose rock.”

Recommended for You: Tubular Robot Maneuvers Through the Body

At the moment the robot has only clambered over surfaces where the size of the roughness is no bigger than the robot’s foot, such as gravel, mulch, and small rock outcrops. Lathrop hopes simulations will predict which surfaces are best for active jamming and which are more suitable for passive. If all goes well, the coffee-filled clogs can be tuned for any surface.

“We can envision that these types of feet can have applications on Moon-like surfaces, as well as in underwater applications,” Lathrop said.