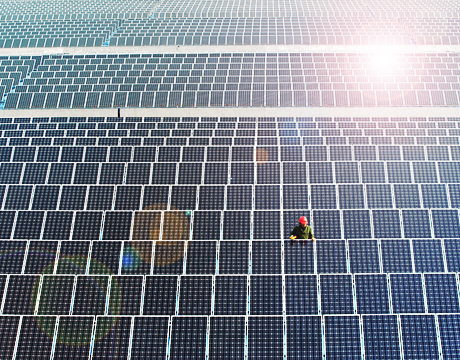 University of Minnesota engineers have added an innovative feature to a standard solar-cell design that boosts its electricity-generating potential by up to 26%. This remarkable improvement may help researchers push the record power conversion efficiencies of dye-sensitized solar cells beyond 12%.

Dye-sensitized solar cells (DSSCs) are made from titanium dioxide (TiO2), an affordable compound that makes these solar cells less expensive than traditional silicon solar cells. A big reason for the lower efficiency of DSSCs compared to other solar cells is that they do not capture enough infrared light from the electromagnetic spectrum.

Eray S. Aydil, professor of chemical engineering and materials science at the University of Minnesota, and then-graduate student Bin Liu (now a professor of engineering at Nanyang Technological University at Singapore), investigated how the integration of layers of nanometer-sized and micrometer-sized particles into the DSSC design impacts cell performance. They theorized that the addition of these particles would extend the distance the light travels within the cell, thereby converting more infrared spectrum into electricity.

The key component in a DSSC is the photoanode, which is made by depositing a porous, nanocrystalline titanium oxide (TiO2) film on a transparent conducting oxide (TCO) glass. A layer of a photoactive dye is then adsorbed on the TiO2 surfaces to absorb light and generate photoexcited electrons.

“Dye-sensitized solar cells make use of excitation of a dye adsorbed on titanium dioxide or a pigment to generate electricity,” says Aydil. “We engineered the pigment both at the nanometer and micrometer scales to trap more light onto the pigment.”

The micrometer-scale microspheres with nanometer pores were placed between layers of nanoscale particles. The spheres act like the bumpers on a pinball machine, disrupting the light path and causing photons to bounce around before eventually making their way through the cell—thereby traveling a greater distance and allowing the solar cell to absorb more of the light.

Various combinations of microsphere layers and nanoparticle layers were tested as photoanodes. The highest power conversion efficiencies resulted from cells that consisted of multiple layers of microspheres and nanoparticles, compared to single-layer cells. This is thought to be due to enhanced light scattering by the porous TiO2 microspheres. Each time the photon interacts with a sphere, a small charge is produced. The interfaces between the layers also help enhance the efficiency by acting like mirrors, keeping the light inside the solar cell where it can be converted to electricity.

Incorporating alternating layers of nanoparticles and microspheres in dye-sensitized solar cells can increase efficiency up to 26%. This approach for increasing light-harvesting efficiency can be easily integrated into current commercial DSSCs, as well as opening up more research possibilities for DSSC solar cells. For example, Liu, at Nanyang Technological University in Singapore, is exploring how to use these structures in photocatalysis and hydrogen generation by water splitting. He is also trying to engineer these titanium dioxide nanostructures to absorb light in the visible spectrum, without the need for dye.

“While we were successful in trapping more light using these layered structures, whether these layers are mechanically robust and strong enough to survive the beating solar cells take over many years is an important and unanswered question,” says Aydil. “I think exploring the limits of these layers, and how to make them stronger and adhere better, are key issues for mechanical engineers in the future. Developing new low-cost alternatives to traditional silicon solar cells is gaining importance because reducing the cost of silicon solar cells is becoming increasingly more difficult.”

For Further Discussion
Dye-sensitized solar cells make use of excitation of a dye adsorbed on titanium dioxide or a pigment to generate electricity.Prof. Eray S. Aydil, University of Minnesota