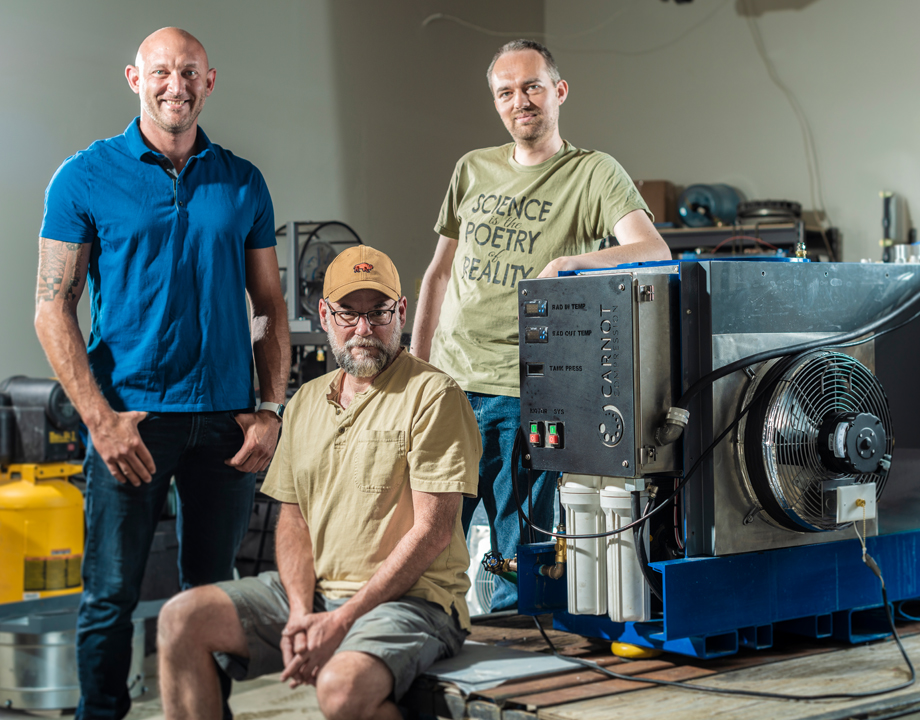 Blast from the Past

Air compressors are one of the most common pieces of equipment used in manufacturing, air tools, garages and anywhere else where compressed air is needed. The design and operation has not changed very much, until now. Carnot Compression, a California startup is taking a cue from 16th century technology to design a compressor that uses a centrifugal system to produce compressed air quieter, without oil and only two moving parts.

The machine works off the principles of a trompe, a medieval device that uses the weight and force of falling water diffused with air bubbles to compress air and force it through a pipe. They were used in forges in Catalonia and were commonly used in mining.

It does have a big drawback in that a trompe needs to be very large to generate any pressure. One in Ontario has a 345-foot drop to create 128 psi. So Carnot’s team began work in 2014 to scale the idea down to something that works in a common air compressor.

The result is a centrifugal system that sucks in air at the top of the device and mixes it with water through a fast-spinning drum. The water becomes heavier, squeezing the air and compressing it. Both water and air are forced out of the bottom, where the compressed air is separated and fed into a tank.

Water is fed through a heat exchanger to cool, and is routed back to the drum, which is powered by an electric motor. The energy needed to compress air is reduced by removing it through the compression process rather than after it has been compressed, said CEO Todd Thompson.

The drum and exhaust fan are the only moving parts. The drum spins so quietly that the exhaust fan is the noisiest part of the device, although Thompson said it can operate indoors below 70 decibels. In comparison, background noise is considered to be about 60 decibels.

Bringing the drum to the optimum size was one of the major design challenges, he said, a process that was helped by 3D printing. “We used 3D printing throughout prototyping,” he said, and it was key to saving time and money in development.

The drum and centrifugal action differentiates it from a traditional piston-forced air compressor and eliminates the need for oil. That also eliminates the possibility of leakage into the airstream.  Thompson says the isothermal process is unique to the marketplace, and generates large volumes of compressed air with better operational efficiency.

According to the company, air compressors make up a growing market that's projected to pass $40 billion by 2025, with the oil-free segment estimated to be about one-third of the total. A typical air compressor has a life of about 10 years. Maintenance for low-horsepower oil-free machines can be difficult because of so many moving parts, claims the firm, providing Carnot with a niche for its design.

Development was funded partly through grants from the California Energy Commission and National Science Foundation. The firm plans to initially produce machines in the 10 to 20 horsepower range, said Thompson, adding that it could be scaled up to 100 hp. It could also be used to compress other gases, such as natural gas, refrigerants or other industrial gases.

Thompson said the firm is still seeking investors but expects to have the next iteration of its prototype on the market at the end of the year.