Birth of the Bacterial Circuit

Birth of the Bacterial Circuit 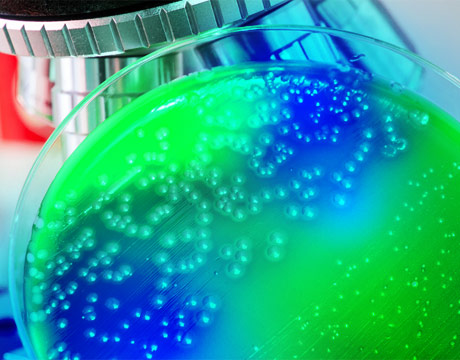 Neon lime-green lozenges rush up against bright, sky-blue snake eggs, they flash and swirl about each other like a glowing animated Starry Night. The swaths of green and blue bulbs seem to communicate, turning each other off and on, a microscopic dance of light, screaming for a score by Philip Glass.

The scene, created at the Biodesign Lab at Rice University, is an operating circuit, but not the kind you first built with your Science Fair 160 in One Electronic Project Kit. No, this one is made of bacteria.

E. Coli, actually. Modified, of course. Mathew Bennett, a synthetic biologist at Rice, created the colorful, flashing, bacterial circuit by borrowing some “quorum sensing” genes from bacteria in the wild. Typically, bacterial colonies use these genes to sense and signal their own size. “As the colonies grow, they will sort of know. And when the concentrations reach a certain level, then things happen,” he says.

To make sure the bacteria in the lab would do such signaling at their beck and call, Bennett and his colleagues spliced the quorum sensing genes into E. coli bacteria, who do not naturally do any quorum sensing. They made two strains. One strain, the activator, would encourage the expression of a certain gene. The other strain, the repressor, would mitigate the expression of that same gene. Now the two strains of E. coli could communicate with each other by emitting small molecules that are metabolized by the cells. “The thing that is oscillating is protein expression,” says Bennett. “There are proteins in the cells and the level is going up and down.” The two colonies end up trading protein expression in an ongoing dialogue.

But making the flashing Lite-Brite work took some finessing. “Our first attempts did not do what we wanted them to do,” says Bennett. “The role of one of the signals that gets sent out from one of the strains is to turn off a gene in the other strain. It didn’t work as well as it should have. It turned it off, but only half way.” In redesigning and repeating the experiment many times over, “We learned a lot about how to do things.”

So what does one do with two bacterial strains that have been successfully engineered and tweaked to flip each other on and off? “This research is fairly basic,” says Bennett. “Any applications are fairly far away. But people are excited and they can see where this type of research could lead.” The first and most obvious application would be the medical management of gut bacteria. A doctor could prescribe a yogurt, for instance, that could interact with other bacteria in the digestive tract to create a desired balance. Controlling such interactions could prove more beneficial than simply adding a probiotic. Also, the secretion of medications could be fine-tuned to coincide with specific internal scenarios. “Beyond that are pie-in-the-sky applications that involve much more complicated things that we can’t imagine right now,” says Bennett.

The stunning neon show, unfortunately, was for verification purposes only. The eye-candy produced by the oscillations of the circuit is not likely to advertise the latest Broadway show or appear over some Las Vegas establishment. “We have neon signs that work pretty well but don’t smell like E. coli,” says Bennett. Michael Abrams is an independent writer.

For Further Discussion
The thing that is oscillating is protein expression. There are proteins in the cells and the level is going up and down.Mathew Bennett, Rice University