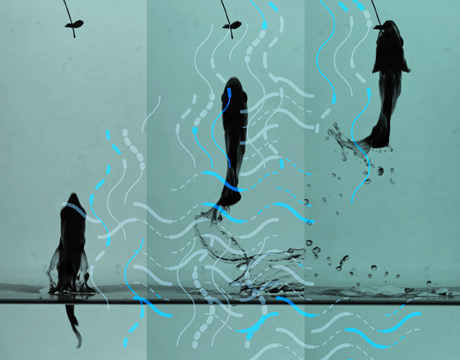 An archer fish can launch itself from a near standstill, out of the water, to a height of more than two times its body length. Fish images: Anna Shih / MIT

Alexandra Techet, associate professor of mechanical and ocean engineering at MIT, has long been fascinated with the ocean and its creatures, but it may have been a water sport played by humans that helped spark her interest in a particular fish.

“I used to play water polo and watch people get out of the water, but in the limiting way humans do it,” Techet says. “But how fish do it? There was an interest in a shark jumping. They go down deep and come up to the surface but it’s different than a jump from a dead stop. The archer fish fit better and it was exciting to think about the possibilities.”

Archer fish, Techet explains, “are thin, near paper thin, but they end up looking almost like the shape of the ace of spades in playing cards.” So for the first study, they looked at, among other things, the archer fish’s kinematics.

“They jump, they spit, and then they jump to capture prey in the water,” Techet says. “There isn’t a guarantee that the fish gets food but other fish aren’t there [above the surface] so if you jump, it’s yours alone in your mouth. You get to eat it. We were seeing the hydrodynamics of jumping. You have all this velocity, all this power into the jump.”

In order to study the fish’s movements, they utilized a high-speed camera. “It lets us look at their body motion and see, for example, the number of tail strokes relative to the height of the bait,” Techet says. “One of the first things we noticed when we plotted this was an almost linear correlation, which was interesting to find. High-speed video was our way to understand the fish in motion and fluid motion.”

Leah Mendelson, assistant professor of mechanical engineering at Harvey Mudd College, who started work on the project as a Ph.D. candidate at MIT, has also been encouraged by the results.

“This linear correlation involved the times of its feeding, its tail, and how high it’s able to jump, not necessarily pushing harder to jump harder but just more times,” Mendelson says. “If athletes want to jump farther, they do it harder. But the archer doesn’t have to do that.”

3D imaging has also helped their work. “We’ve been working on getting a more complete picture of fin-pushing instrumentation,” Mendelson says. “I was able to play with how we arranged the cameras to get better information near the body film tracer particles, much closer to where they were being pushed against the fins. Originally when we started with one 2D camera, we were looking at the tank wall and in some studies, which are under review to be published right now, we rearranged and had seven cameras in a 3D configuration. We set up the camera rails so none were looking down when it came to the tank. We had no problems with surface reflection this way.”

Techet says there is more work to do but believes this could ultimately help create more efficient underwater vehicles and even vehicles that travel on the water’s surface. “The archer fish has impressive efficiency,” she says. “We’re still learning.”