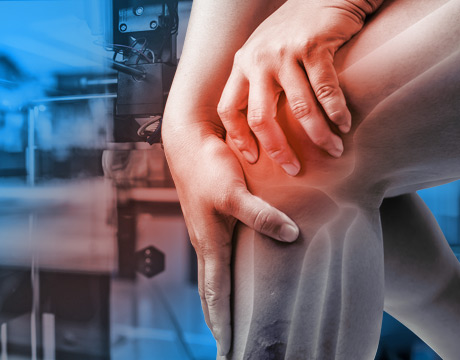 Thirty-two percent of American adults experience some kind of joint pain, according to the Centers for Disease Control. And that number climbs as people age: Sports injuries, weight gain, and everyday wear and tear are common reasons why more than half of people 65 and older report having joint pain.

With most Baby Boomers age 55 and older, joint problems are getting attention in health care and research, and bioengineering may play a key role in treatment and prevention.

Knee Relief in the Lab

Knees are the most common joint to have pain or injury. According to the American Osteopathic Association, one-third of Americans report having some kind of knee pain.

Meniscus tears are a common knee injury, especially for athletes in sports that require jumping, sudden stops, and sudden changes of direction such as football, volleyball, and basketball. And help for meniscus damage may be coming from a laboratory.

The Shiley Center for Orthopaedic Research and Education, a La Jolla, CA, facility that is part of Scripps Clinic, has grown a complete meniscus. The team, led by director of orthopaedic research Dr. Darryl D’Lima, created the meniscus using a 3D printer.

While 3D printing had worked in bioprinting cells, D’Lima said there had not been much success in printing spun fibers like those found in tendons and ligaments, key parts of joints.

The project—which was supported through grant funding from the California Institute of Regenerative Medicine, the Shaffer Family Foundation and Donald and Darlene Shiley—used electrospinning, which is commonly used in textile 3D printing; a customized drum to rotate and gather the threads in the shape of a meniscus; and electrospraying, which the team hoped would allow for tissue cells to be placed between the fibers just as they are in a natural meniscus.

“We were skeptical,” D’Lima said. “We were afraid the voltage used would cook the cells, but they survived.”

The team’s target is to get a printed meniscus just like a natural one. The timeline of getting the meniscus into a clinical trial in three years, D’Lima said, is an aggressive one. Clinical trials would take another 10 to 15 years. “The holy grail is that by replacing the meniscus, patients won’t develop arthritis," he said.

“Fifty years ago, we didn’t know what a meniscus did,” he said. “It was thought to be like an appendix, something our bodies no longer needed.”

The research, which also included abstract lead author Dr. Jihye Baek and research collaborator and abstract co-author Dr. Martin Lotz of the Scripps Research Institute, could also lead to creating tendons, ligaments and other kinds of tissues. One example, D’Lima said, is a spinal disc. Replacing a ruptured disc would be a more effective treatment than spinal fusion, he said, as that procedure provides relief but also transfers the problem to the remaining discs, which could lead to problems with them down the road.

Researchers at the University of Utah have discovered that damage to collagen, a key component of all tissue, can occur before other signs of injury become apparent.

Jeffrey Weiss, a University of Utah bioengineering professor who led the study with fellow bioengineering professor Michael Yu, said the discovery happened when Yu was using a probe called a collagen hybridizing peptide (CHP) to study denatured collagen. They stretched tendons and used CHPs to see if the CHPs could detect damage and discovered that collagen molecules show damage before tissue failure and injuries occur.

While applications for treatment are years away, understanding how damage occurs at the molecular level offers many of possibilities in terms of joint health, Weiss said.

“Ultimately, we could use CHPs to determine at what level of tension damage is caused,” he said. “That would help in knowing when to modify workouts or physical therapy.”

The CHPs could also be part of treatment someday, Weiss said.

“Imagine attaching therapeutic drugs to the CHPs, and being able to target an area that has damaged collagen,” he said.

And there are more possibilities from there.

“This could extend to cartilage and bone,” Weiss said. “It could be used for diagnosing and tracking injuries as well as targeting treatment.”

The holy grail is that by replacing the meniscus, patients won’t develop arthritis. Dr. Darryl D’Lima, Shiley Center for Orthopaedic Research and Education