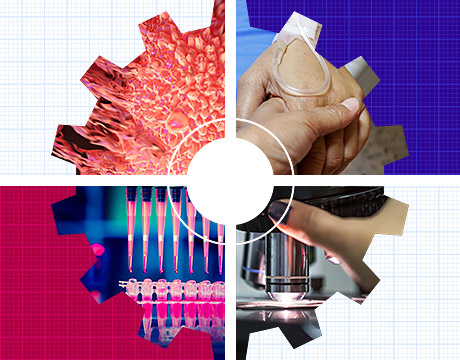 Bioengineering a Key Weapon Against Cancer

Immunotherapy, or the harnessing of the human body’s natural immune system in order to fight disease, is not new a new concept.

In fact, its roots can be traced back more than a century, to the groundbreaking work of New York City surgeon Dr. William Coley, who first used immune response to treat cancer in the late nineteenth century. Coley’s primitive treatments were generally effective, leading to remission in several different types of cancers, but the advent of new surgical techniques and radiation therapy in the early twentieth century left his immune-based treatments behind and immunotherapy fell out of common use.

That all changed in the 1970s, when researchers went back to study Coley’s original work in an effort to develop new tools in the then-growing fight against cancer. By that time, medical science more fully understood the connection between cancer and the immune system, and was focused on ways to “program” the body to respond to pathogens or tumors in a certain way, allowing patients to effectively heal themselves.

Since then, the field has grown dramatically, with a whole host of new drugs and treatments for cancer and other diseases based on immune system response. Researchers are now even beginning to find ways to selectively engineer immune cells in order to trigger specific responses. To, for instance, target a particular tumor or respond to a certain illness.

The fast-growing field of immunoengineering is making that happen.

“Those investigating the immune system’s role in cancer have led to a lot of new ideas, a lot of excitement about new approaches,” saysDr. John Wilson, an assistant professor of chemical and biomolecular engineering at Vanderbilt University in Nashville, TN, whose work is focused on developing new immune system-based therapies to “reprogram” cancer cells to kill themselves. “From my perspective, I think that the recent excitement in immunoengineering has largely been born out of the excitement of cancer immunotherapy. There have always been people doing drug delivery for vaccinations and infectious diseases, but as it’s really blown up I think cancer has been, at least in the academic world, a big driver for expanding research in this area.”

Until about a decade ago, cancer immunotherapy was still somewhat understudied, even within the broader field of immunology, says Wilson. In recent years, however, the approval of checkpoint blockade therapies—which block inhibitory checkpoints in the body in order to restore proper immune system function in the fight against cancer—and the pharmaceutical segment that has grown up around that technology has brought a renewed focus to the promise and potential of cancer immunology.

Research around T cells is a good example of this. These cells are the true “warriors of the immune system,” the cells that go out and actually kill tumor cells, and there are more than 25 million different types of them in the body. But the fact that some people respond better than others to immunotherapy treatments points to the fact that having the “right” kinds of T cells is critical to successful immune response. With this information, researchers are now learning which T cells perform the best against certain cancers and are developing ways to create or otherwise promote those cells in patients. This type of immunoengineering work is driving further expansion of similar treatments.

“It's exciting to see more people getting involved in recognizing the power of the immune system,” saysWilson. “I think most of what's known in immunology came from the infection field; how does the immune system respond to infection? But I think that what's accelerated a lot of this is an increasing recognition of its role in lots of different diseases.”

Cancer is just the beginning, however.

The immune system is being leveraged in everything from tissue regeneration to allergy treatment, making use of Big Data, structural analysis and other new computational tools that didn’t exist just a few years ago.

For instance, Dr. Alice Tomei, an assistant professor in the Department of Biomedical Engineering at the University of Miami, is working on immunotherapy treatments for Type I diabetes as head of the Islet Immunoengineering Laboratory at the Diabetes Research Institute.

“For us, immunoengineering is more like a different way of addressing a problem,” she says. “For Type I diabetes, it’s about autoimmunity. How do we manage autoimmunity? How do we address autoimmunity from an engineering point of view? So what I do, I engineer cells with biomaterial.”

Tomei’s work is focused on engineering beta cells, which are found in insulin, and working with stem cell-derived beta cells to control the size and responses of these cells, impacting the body’s insulin response. This works for Type I diabetes, she explaines, because the disease is largely an autoimmune response that has gotten out of whack, killing off the body’s natural beta cells and forcing the patient to become insulin dependent.

“So what we are developing are these biomaterials that can actually convert these cells, the ones that kill beta cells, and either delete them or control them,” she says. “You can do that by combining bio-materials with immunoregulatory factors. This is very common in the field of autoimmune engineering, because certain things that you want to delete in cancer you also want them in autoimmunity.”

The lesson in all of this work is that the immune system is very, very powerful, saysDr. Brian Baker, chair of the Department of Chemistry and Biochemistry at the University of Notre Dame, and engineering approaches to immunotherapy are changing the game for medical science.

In fact, even the basic drugs that are available right now, which are mostly non-engineered immunotherapies, are producing incredible patient responses. Imagine what medical science will be able to do with the targeted, better-designed treatments that immunoengineers are working on?

“There’s a lot to learn,”Baker says, “but if you look from just what’s been going on in the last five years, then you try to take the big lessons from how our immune systems actually work, I think we’re looking at 25 years from now of cancer primarily being treated by immunotherapy and much more, much greater cure rates than people are comfortable talking about right now.”

What we are developing are these biomaterials that can actually convert these cells, the ones that kill beta cells, and either delete them or control them.Dr. Alice Tomei, University of Miami