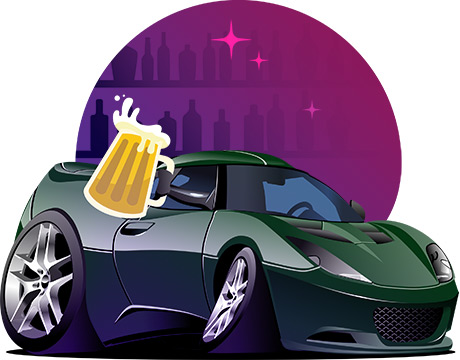 After hours, some researchers have a reputation for knocking back a few beers. Research chemists in England recently brought some of the pub back to the lab, converting beer into fuel that could be used in existing automobiles.

The goal behind the experiment was to create a sustainable fuel that is better than ethanol, which is mixed with standard gasoline and used in vehicles today. The alternative was butanol, which has fuel properties such as energy density and octane rating that are closer to standard gasoline when compared to ethanol. 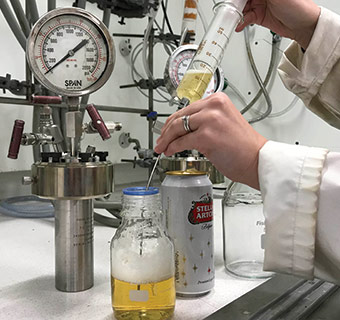 A researcher testing beer in the lab. Image: University of Bristol

But in the experiment, the creation of butanol still required ethanol, which is found in beer. “What we call ‘alcohol’ in an alcoholic drink is always ethanol,” namely the chemical formula C2H5OH, says Duncan Wass, professor of chemistry at the University of Bristol in England.

For You: Learn about the latest in renewable energy from ASME.org

The researchers used a catalyst - a chemical compound that can speed up chemical reactions without undergoing any permanent change - based on metal ruthenium to convert ethanol to butanol.

The demonstration was a fun way of showing the possibilities of creating butanol-based fuel. Besides beer, anything with ethanol could be a source. “You wouldn’t really use beer, unless there was a surplus or something,” Wass says.

The ethanol-to-butanol process, when implemented, will look much like a traditional petrochemical process, and the catalyst will be central piece of technology. The process is scalable and also easy to implement at an industrial level.

A good beer with high alcohol content would make for great fuel, so “lite” beers don’t make the cut. “The only thing that matters is the ethanol content, so a strong beer would be easier to convert than a weak beer,” Wass says.

Other types of alcohol such as wine and gin were also tested, according to the researchers’ recent paper.

The butanol-based fuel wasn’t tested in a car so the researchers couldn’t provide metrics on its efficiency. But the obvious opportunity lies as a replacement to ethanol, which is widely available. In 2016, the U.S. market consumed 143.4billion gallons of finished motor gasoline, with another 14.4billion gallons of ethanol mixed in, according to the U.S. Energy Information Administration.

The Bristol effort is one of many looking at biofuels for vehicles and airplanes, and follows a fast growing public-private initiative to reduce carbon emissions.

Read More:
Sun Train Shines New Life on Vintage Rail
An Energy Grid with a Mind of Its Own
Solar-Powered Drones Go Mainstream