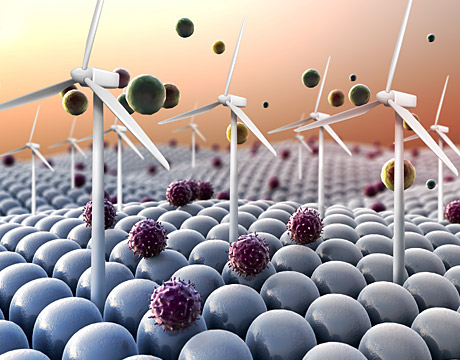 Like any moving creature immersed in a fluid, bacteria can whip up flow. But the flow created by groups of bacteria is turbulent, unorganized, and useless, like the choppy, chaotic water of an overpopulated pool party.

But if you line those bacteria up into a nice little array, suddenly the fluid they’re in will begin to flow in an organized, and therefore useful, manner. That’s what researchers at Oxford University's Department of Physics have shown with a simulation. They’ve effectively demonstrated that microorganisms can be used to create microscopic wind farms.

“What we have is a simulation of a dense suspension of bacteria, kind of a mob of them, and they are all swimming,” says Tyler Shendruk, a physicist at Oxford who studies soft, condensed matter systems and ran the simulation. “Birds move together, but bacteria don't move in as orderly a way. They're not going down south, they’re just going about their lives.”

Shendruk put the virtual bacterium in an eight-by-eight grid. Each “bacteria” was really a smooth disk, or rotor, free of any teeth. On its own, a single such rotor would rotate freely, “like a weather vane in a thunderstorm, with no actual order to the spinning,” says Shendruk. But in the array, one disk would spin one way and the others would start spinning the other way. “That was surprising to us, because we didn't need to make the disks something fancy, didn’t need fancy gears, didn't have to engineer it into a micro machine. They’re just smooth disks.”

To create the most orderly flow, with the fastest spinning, and the greatest potential for power generation, Shendruk had to find the ideal amount of separation between rotors. If the disks are far away from each other, they act as if they’re alone, spinning willy-nilly with plenty of turbulence between them. Put the discs really close to each other and the size of the swirls in the flow will be bigger than the space between disks, so the disks have to work too hard against their neighbors. The sweet spot depends on the viscosity of the fluid and, more important, how active the bacteria are. “For dense suspensions of well-fed bacteria, the number is somewhere around 50 microns,” says Shendruk. “That's the right size, perfect for making a microscopic machine.”

The power created by that machine is somewhat beside the point, and is certainly not enough to power even the smallest of cell phone screens. “What’s exciting to me is that you spontaneously get this self-decided organization. A physicist would call this self-assembly,” says Shendruk. “Animals are self-assembled. We start out as a bunch of cells, our cells come together, some of our cells are a brain, some of our cells are a kidney. That’s really complicated. But there are far more simple systems that self-assemble. This is one where we have the swirling randomness of active turbulence forming a partnership with our micro machine to self-assemble into something useful. That’s the cool thing about what we found, rather than generating this ungodly small amount of power.”

Though Shendruk works entirely in the world of simulations, he thinks it’s not unlikely that researchers will soon take up the obvious challenge and build a microscopic microbial wind farm in the actual world.

“When we biophysicists look to biological materials, the stuff that biology is made of, it's amazing to us that it can organize itself, that it just intrinsically, from the materials of it, knows how it should be and constructs itself,” says Shendruk. “And we want to design man-made systems that are able to do that, too. What we're dreaming of is micro robots that build themselves. We’re nowhere near that, but this is a nice simple halfway step.”

For Further Discussion
We have the swirling randomness of active turbulence forming a partnership with our micro machine to self-assemble into something useful.Prof. Tyler Shendruk, Oxford University