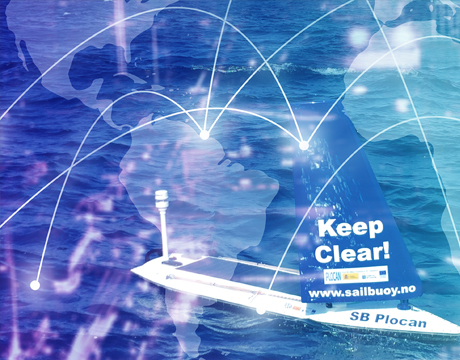 Autonomous, Robotic Boat First to Sail Across the Atlantic

No Atlantic crossing is easy, but the little Sailbuoy has to maneuver past oil platforms, navigate high-traffic areas, and withstand gale force winds without a human hand at the tiller. It took 80 days for Sailbuoy to travel from Newfoundland in Canada to Ireland, becoming the first self-maneuvering boat to complete a transatlantic journey.

The rough distance, as the crow flies, is about 2,000 miles, but the sail distance turned out to be about 3,169 miles. The boat experienced smooth sailing and faced no major challenges, said David Peddie, CEO of Offshore Sensing, the Norway-based company that made the boat.

“We were concerned about icebergs and being picked up by fishing boats, so we avoided ship traffic,” Peddie said. “We had some strong currents pushing it backwards, but this only delayed the crossing.”

We were concerned about icebergs and being picked up by fishing boats, so we avoided ship traffic. We had some strong currents pushing it backwards, but this only delayed the crossing.
David Peddie, CEO of Offshore Sensing

The unpredictable nature of the ocean caused a previous attempt by Sailbuoy, and other groups, at a transatlantic journey to fail.

“Last year we only made it halfway. The reason for this was a screw that came loose and shorted an electrical connection disabling the autopilot,” Peddie said. “We forgot to lock it securely.

“One doesn’t know what one might hit, one can get tangled in nets or floating debris, get smashed by a whale, chewed on by a shark or maybe something else,” Peddie added. “This is quite rare, but you never know.”

For You: Racism Runs Deep, Even Against Robots

The Sailbuoy used wind for propulsion and solar panels for power. Unlike autonomous cars, the boat didn’t use cameras for obstacle detection or navigation. Instead, it used GPS and sensors to find its position, heading, and speed. The boat transmits data to and from shore in real time using the Iridium satellite system.

It is designed for a handful of applications, such as measuring ocean and atmospheric parameters, fishery management, aquaculture, tracking oil spills, and serving as a communication relay station for subsea instrumentation.

During its recent journey, the robotic boat received waypoints toward which it was to travel via the satellite network. The Sailbuoy navigated to each waypoint without human intervention. Sailbuoy sails in much the same way as a traditional sailboat, tacking to make headway against the wind and to approach a particular waypoint.

With a length of 2 meters and an average speed of about 1.5 knots, Sailbuoy has an internal battery with a 400 Wh payload that could keep the boat operational for 6 months. The boat could survive waves as high as 8 meters. Much smaller than a conventional boat, it measures 2 meters, weighs 60 kilograms, and travels at an average speed of about 1.5 knots.

The Sailbuoy is loaded with echo sounders and atmospheric and water quality sensors. While at sea, it gathered measurements on wave height. Remote pilots control the boat through a website where they update waypoints, download data, and monitor Sailbuoy’s progress.

Though the ultimate goal is to build a series of travelling ocean-going sensors to make environmental readings, the purpose of Sailbuoy’s transatlantic crossing was simply to test its endurance.

The biggest challenge is yet to come. “A next hairy goal would be to circumnavigate the Antarctic,” Peddie said.