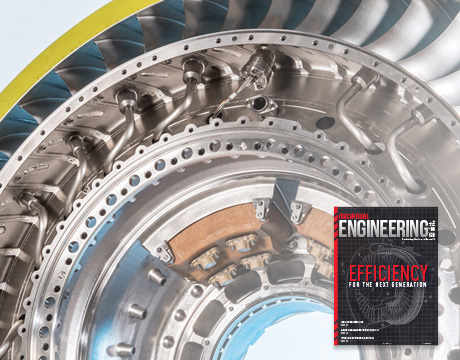 by Timothy C. Lieuwen and Karen A. Thole

Gas turbines are taking off.

Jet aircraft powered by gas turbines have long been the star of the long-haul passenger transportation system in the United States and around the world. And over the last decade, as new power generating capacity has been added to the electric system, gas turbines (along with wind turbines) also have become the dominant technology in the power industry—and are positioned to continue their dominance. The U.S. Energy Information Administration projects that roughly 60 percent of new power generation capacity between today and 2035 will be supplied by combined cycle gas turbine plants.

A variety of factors have contributed to the new prominence of gas turbine technology in the power industry. In the United States, for instance, natural gas production from shale formations has led to a steep reduction in gas prices in the last 10 years.

Gas turbine generating facilities create little pollution—emitting no sulfur oxides, low levels of nitrogen oxides and particulates, and less than half the carbon dioxide per MWh of a coal-fired plant. Because gas turbine power plants are less of a burden on surrounding areas, they can be sited, permitted, and built quickly, which lowers the cost of financing the construction. And due to their rapid transient response capabilities, gas turbines play an important role in supplying power to even out variations in renewable power, especially solar and wind.

This intersection also is creating exciting opportunities for aftermarket businesses through the potential of rapid repairs, refurbishments, and spare parts on demand.

The value from those new manufacturing techniques and non-traditional materials applied to gas turbines can come from reduced development times, cost of the part, and performance. Coupled with new integrated design and manufacturing tools, advanced manufacturing promises to enable engineers to create solutions that would have been impossible to conceive of a decade ago.

Advanced manufacturing may enable higher turbine inlet temperatures, new materials and coatings, improved cooling, and better sealing and three-dimensional aerodynamics to reduce losses—all of which impact efficiency. Using 3-D printing to manufacture airfoils out of several materials, each matched to the level of stress it would experience, could lead to tremendous weight reductions. And new combustor designs could increase operability windows, reduce emissions, and allow fuel flexibility while maintaining flame stability.

Advanced manufacturing can also achieve increased performance and operability through the integration of sensors in turbine components.

Through the use of selective laser melting, for example, instrumentation can be designed and integrated into the component prior to printing. Moreover, selective laser melting provides the opportunity to place instrumentation in locations which otherwise might be impossible, given the routing or line-of-sight issues arising from conventional processes.

Printing reliable sensors directly on turbine components, such as the airfoils, can lead to improved monitoring and prognostics capabilities of the component, reducing costs, downtime for repairs, and the complexity of sensor installation.

Moreover, gas turbines are typically operated in a way that is optimal only to an average engine, operating on an average day, with an average fuel composition; having these much more detailed measurements will enable significant improvements in performance.

The entry point where advanced manufacturing techniques make business sense depends upon the application, and it is helpful to differentiate between the validation and prototyping phase, the production phase, and the repair and aftermarket phase.

Start with the validation and prototyping phase: Conventional processes used in turbine development programs require significant design cycle time. That time can be reduced significantly through parallel and integrated development processes that are possible via the application of advanced manufacturing. For instance, a new digital 3-D design can be printed immediately using selective laser melting and then tested. (The authors of this article routinely use additive manufacturing for combustion and turbine cooling experiments.)

At the production phase, the business case for developing the tooling and fixtures needed to manufacture parts is quite different from the one for manufacturing the actual parts themselves. As in the prototyping phase, advanced manufacturing is quickly buying its way into the shop floor for the rapid production of fixtures that minimize facility setup time. In addition, it may speed up the casting processes of complex parts such as turbine blades by replacing the lost wax process with 3-D printed cores.

Even with the production of engine components themselves, industry is moving ahead. In April 2015, General Electric announced the first-ever 3-D printed engine component certified by the U.S. Federal Aviation Administration: A part of the compressor used in the gas turbine that powers Boeing’s 777. GE also announced that its GE Aviation division plans to produce more than 100,000 additively manufactured parts by 2020, including the fuel nozzles slated for use in its innovative LEAP engine.

Meanwhile, other gas turbine manufacturers are making use of advanced methods. Rolls-Royce announced in 2015 that it will conduct flight tests on the largest 3-D printed component to ever power an aircraft­—a titanium housing that contains 48 airfoils. The component is 1.5 m in diameter and 0.5 m in thickness. And recently, Toulouse-based Safran Microturbo was able to print a complete gas turbine assembly.

Finally, opportunities in the repair and overhaul market are particularly exciting. New technologies are creating better methods for welding, replacing abraded material, and joining two pieces made from different materials, such as ceramic thermal barrier coatings onto combustor liners or turbine blades. In addition, the possibility of repairing components in the field rather than requiring them to be shipped to a central facility offers significant opportunities for minimizing outages or time off wing.

As with the introduction of any new method, there are challenges in integrating advanced manufacturing into current development programs. For instance, today’s workforce is unprepared to take advantage of what advanced manufacturing offers. Academic programs must educate future engineers to integrate design with new manufacturing methods, and we need better technical education to produce the skilled labor qualified to use the new processes.

The certification processes for components also needs attention. Without clear policies, the tremendous opportunities for the aftermarket repair business may result in intellectual property battles where lines can easily be blurred given the digitization of parts. Policies need to address potential issues quickly in order to promote the uses of advanced manufacturing.

Even if all that can be accomplished, the larger revolution is yet to come: The complete rethinking of architectures, layouts, and general design practices.

For example, one gas turbine component that has received significant attention from potential first adopters is the fuel injector/nozzle, which has numerous intricate holes and injection passages. However, the design teams that have worked on it quickly realized that not only can they more easily manufacture those complex components, but a bewildering array of new options are now available. A simple example is the fuel orifice itself—it has always been round because drilled holes are round, but is that the optimal shape?

Similarly, redesigning turbine airfoils presents tremendous opportunities to route valuable cooling air to regions where it was not previously possible to cool in an effective manner. What is the optimal shape and layout of the airfoil cooling channels? Future combustors, turbine components, and other high tech critical components will be increasingly changed as people rethink development of these components outside of the manufacturing restrictions that we have grown up with.

The gas turbine is poised to become the most important thermal energy and propulsion device in the 21st century. Advanced manufacture will significantly alter how gas turbines are made and perhaps how they operate.

Timothy C. Lieuwen, an ASME Fellow, is professor in the School of Aerospace Engineering, and executive director of the Strategic Energy Institute, at the Georgia Institute of Technology in Atlanta. Karen A. Thole, also an ASME Fellow, is a professor and head of the Department Mechanical and Nuclear Engineering at Pennsylvania State University in State College.

The intersection of gas turbines for power generation and aviation with advanced manufacturing is creating exciting opportunities.