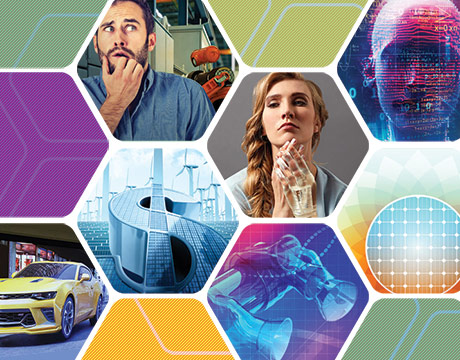 The cynical among us have sung a familiar refrain in recent years. Disappointed with the perceived lack of progress toward the science fiction pop culture promised in the 1960s and 1970s, “They promised us jet packs!” has become the defiant title of numerous essays, pop culture commentaries, and has even inspired the name of one obscure Scottish rock band. However, those of us who covered the field of engineering and technology in general in 2017 have a very different perception of where things are headed. And we think it is fair to say that readers of ASME.org who are on the front lines of engineering in research labs and corporate R&D departments around the globe would certainly join us in politely informing the cynical among us: “You may not have been paying enough attention.”

2017 was a very memorable year in the world of science, and particularly engineering, as human society moved ever closer to what was once science fiction. Robot teachers equipped with artificial intelligence, permanent artificial hearts, and cars designed entirely in virtual reality environments are all nuts-and-bolts realities in the here-and-now, not in a distant, unattainable future. The challenge that remains for technology – and engineering – is to mass produce and mass market these technologies, and therein lies the crux of many of this year’s “must-read” stories.

In no particular order, the editorial staff of ASME.org lists the ten most compelling, intriguing, and in some cases, mind-blowing stories from the year 2017. Along with the list, which we hope you find as interesting as we do, we would also like to wish all of our readers a Happy and Healthy Holiday Season. We hope you will continue to visit ASME.org for all that is cutting edge in the new year and long into the future.

“Robophobia”: Bridging the Uncanny Valley “Robophobia” sums up the feeling of many people toward their up-and-coming mechanical cohorts. Regardless of how useful, friendly, or life-like robots may seem, there will always be those who are just a little creeped out.

An Artificial Heart to Beat For many years, science has been in search of a true artificial heart, one that could serve as a reliable and permanent replacement for the one we were all born with. Now, thanks to researchers at the Oregon Health & Science University – and an ingenious single rotary pump ­that does the work of the entire heart – this may be possible.

Ceramics Make Hypersonic Flight a Possibility Harkening back to the glory days of NASA and the field of aeronautics, this speculative feature on the possibility of air travel at speeds beyond Mach 5 marvels at the prospect of reducing a trip from London to Sydney to under an hour - if you believe some estimates.

Robot Teachers Transform Education In early 2016, Jill Watson was assigned to be the teaching assistant for Dr. Ashok Goel’s graduate course in artificial intelligence at Georgia Tech. After one semester, he revealed the assistant was an AI-backed robot based on IBM’s Watson system, the next step on the path to personalized learning.

Chic Prosthetics Why can’t prosthetic limbs be fashionable and cool as well as functional? Danielle Clode of Dani Clode Design says they can, and she has the working models to prove it. Looking at her “Synchronized” artificial arm, the editors at ASME.org had that familiar thought when confronted by the obvious: Why didn’t someone think of this sooner?

Top 5 Potential Improvements to Solar Power Solar power and other sources of renewable energy continue to gain influence and attention but their true potential has yet to be realized. Here are the top five ways that solar could get over the hump and truly become an ubiquitous form of everyday energy.

New 3D Printer Extruder Takes Manufacturing to Next Level Three short years ago, large-area 3D printers could print about 10 pounds of high-resolution material per hour. Today, thanks to new extruder and nozzle technologies, these printers can pump out about 100 pounds of even higher-resolution material in the same time, making the possibilities for manufacturing endless.

Money Talks with Renewable Energy Renewable energy has arrived in corporate America, the result of renewable energy providers and advocates speaking a language that resonates almost universally in C-suites and boardrooms worldwide: Cost.

Manufacturing Cars with Virtual Reality Car manufacturers such as General Motors and Ford are increasingly using virtual reality to test design plans, tolerances, and safety features in virtual environments to ensure their products are evaluated at a very early phase of the process, thereby reducing the time and costs.

Cyborg Dragonfly Takes to the Air While not quite as terrifying as "The Terminator," the idea of an army of living, breathing cyborg dragonflies controlled by sensors and light pulses is a bit unsettling. Yet a team at Draper Lab, MIT, has created just that.