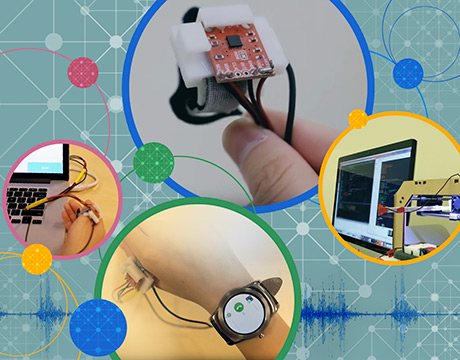 Ring Around the Thumb for Easier Data Input

Say you’re at a movie and you get a text from the babysitter asking where to find the stuffed animal your child can’t sleep without. Or maybe you’re a teenager at the table—no phones allowed—but you simply have got to share a piece of gossip with a friend. At the moment, there’s no way to input text into a phone, or any other device, without drawing attention to the activity with thumbs on screen or words whispered into a mouthpiece.

But Cheng Zhang, a researcher at Georgia Tech’s Ubicomp Lab, has a new way for teenagers, parents, and anyone else to enter words on the sly. It’s a thumb ring, and it’s sensitive to both sound and movement. “We chose the thumb because it feels natural,” Zhang says. “But, more importantly, if you drag your thumb across your fingers, it has tactile feedback.”

When you drag your thumb across a finger it’s a very unique sound, very different from the thumb touching other objects. Cheng Zhang, researcher, Georgia Tech 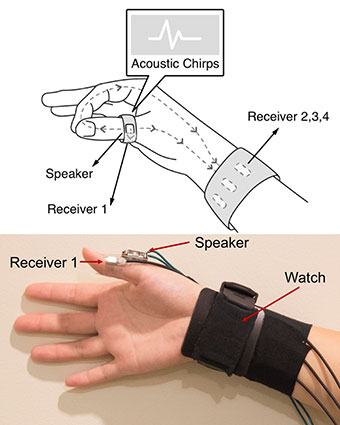 There have been other attempts at creating one-handed input devices, but they’re far more obtrusive than a simple ring. And they have a steep learning curve, with users usually required to learn different key combinations—or chords—for a single letter.

Zhang thinks that these devices haven’t taken off because no one wants to memorize new gestures or movements The QWERTY keyboard, as an example, continues to be the dominant way to type, despite the fact that it was designed deliberately to slow users down, and can, these days, be easily swapped for faster configurations on any computer. He wanted to stick to “knowledge already in your head,” so he turned to Unistroke, invented 27 years ago for handwriting recognition. With the thumb ring on, users need only make the shape of the letter they want to enter and a gyroscope on the ring recognizes the pattern. Advanced users, with a greater tolerance for learning, could conceivably teach the ring to recognize more efficient gestures in future iterations of the technology.

Just for You: More stories on design and manufacturing from ASME.org

Needless to say, the average thumb does not go immobile when finished inputting text. Zhang needed a way to let his ring know when a thumb started a gesture and when it finished. So he included a contact microphone. The type of mic, its proximity to all digits, and the distinctness of thumb on finger vibrations allow the ring to avoid false positives and negatives from ambient sound. “When you drag your thumb across a finger it’s a very unique sound, very different from the thumb touching other objects.”

The uniqueness of that sound could, theoretically, allow the ring to operate without the gyroscope. With a large enough data set, a brush to different parts of different fingers could indicate a different letter. In fact, Zhang’s first experiments used only a microphone and no gyroscope. “But sound can be different from person to person. It depends on what kind of skin you have. And when your hand is wet it sounds different. Then you have to provide more training,” Zhang says. “In real life, no one wants to do that.”

Of course, the device has applications beyond the surreptitious communications of teens and moviegoers. It could provide a safer way to input information while driving and it could allow people with disabilities to easily communicate. It will also work with any electronic device, allowing the gadget-swamped consumer to ditch TV remotes and other input devices. But first it has to shrink.

“In the future it will get small and comfy,” says Zhang. “And it will look cool.”