An Exoskeleton, Batteries Not Included

An Exoskeleton, Batteries Not Included 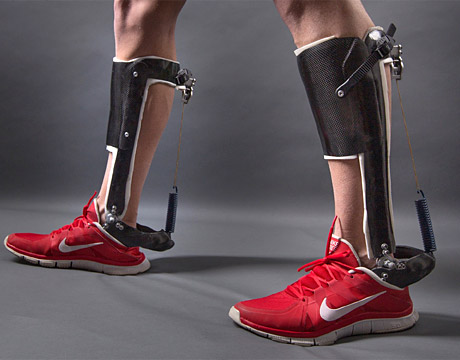 Steven Collins, associate professor in the department of mechanical engineering at Carnegie Mellon University, was part of a team that found a way to create a better exoskeleton for walking, but with one small twist.

It doesn’t rely on power.

“We tried to make the body more efficient, so that it doesn’t require extra power and might be cheaper and run for longer periods of time,” Collins says. “We set up to try and design a device to reduce costs.”

But how? They tried to draw from decades of biomechanics studies on calf muscles for walking. “We ultimately had the thought of acting as a clutch, a catapult-like situation with the ankle and foot. Your Achilles tendon ends up stretching and, at the end, there’s recoiling and pushing you forward. Most of what the calf muscle does during this process is hold on to one end of the Achilles tendon as it is stretched, but muscles aren’t very efficient at producing force. It saves a person energy and improves efficiency of walking.”

Approximately five years later, the exoskeleton device was built. It consists of three main pieces: a frame that connects to your shank (lower leg) and foot, a spring, and a clutch.

“Beyond the spring, the frame is stiff, lightweight carbon fiber that is attached to the lower leg and foot,” he explains. The clutch? “Well, that’s trickier, like a pen-click mechanism. It goes through a cycle. When the foot touches the ground, the ratchet ratchets and pulls up any slack that connects to the spring. The clutch locks up and the spring stretches and then recoils. It stores a bunch of energy and returns the energy. At the very end, the toes come off the ground and the clutch is disengaged and can move the foot freely through the air. At the end of the swing phase, it resets to the beginning.”

And again, this version had no external power: no motors, no batteries, no chemical energy.

A challenge in creating the device was keeping it light because every gram added to a person’s legs increases the effort to walk. “The first prototype was about 500 grams and we went down from there,” he explains. “The efficiency reduction in metabolic energy expended during walking was seven percent. That isn’t a small amount. It reduces fatigue, like taking off a five kilogram backpack.”

In the future, they would like to make the device more robust and versatile for commercial translation. And, Collins says, this one will allow for power but on a very small scale. “The clutch we used doesn’t offer very good controllability so we developed a clutch that will not only be applicable to this system but to other systems. The cool thing abut this clutch is it’s just a couple of grams per operating element at a low voltage of around 250 volts. It’s low enough voltage that you can use standard electronics hardware. Low power consumption and reasonable voltage means you can have lots of clutches in the system, and all with the power of maybe a watch battery.”

For Further Discussion
We tried to make the body more efficient, so that it doesn’t require extra power and might be cheaper and run for longer periods of time. We set up to try and design a device to reduce costs.Prof. Steven Collins, Carnegie Mellon University