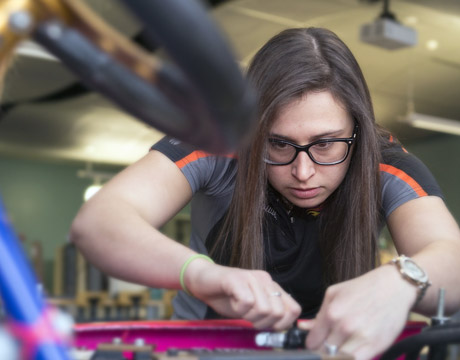 It wasn’t that long ago that finding females on a college team of engineering students entering racing competitions was a rarity. This year, a group of some 40 undergraduates at the Rochester Institute of Technology’s Kate Gleason College of Engineering, calling themselves “Hot Wheelz,” is making history as the first and only all-female race team entering the SAE Formula Hybrid competition at Dartmouth University, to be held in May 2016.

The team is co-managed by two fifth-year mechanical engineering students, Maura Chmielowiec, chief engineer and technical leader, and Jennifer Smith, project manager. They designed and built an electric racecar, doing all of the engineering, welding, and sourcing of components as well as negotiating sponsorship deals, crowdsourcing, and making a project management plan.

The competition emphasizes drive train innovation and fuel efficiency in a high-performance application. Teams compete in driving events: acceleration, autocross, and endurance, and also score points for project management, design, and inspection. The team is required to submit some dozen technical reports including updates on the hundreds of components they use prior to the competition. Before being allowed on the track, the cars must pass rigorous inspection, complying with numerous rules in a 170-plus page rulebook.

The growth of Hot Wheelz has all taken place since 2011 when RIT sought to put together an all-female racing team to build an electrical vehicle and compete in the university’s first campus-wide e-vehicle drag race in 2012. Chmielowiec was among the first of some 10 women to volunteer, although she was only a freshman mechanical engineering major at the time. She had been working on cars since the age of 12, when she won a contest competing for an all-access NASCAR extravaganza at Watkins Glen, NY. Within two years, she had bought a junky sports car with money she made mowing lawns. Poring over books and tinkering, she got the 1986 Nissan 300ZX running even before she could legally drive.

So she was up for the challenge when the RIT call came. With Chmielowiec at the wheel, Hot Wheelz’ hot pink dragster, converted from a go-cart, won the 100-meter race in just under six seconds.

Over the next couple of years, the team added more women and entered other on-campus races until 2014, when members learned that the annual competition was going to feature drones instead of cars.

Chmielowiec proposed that the team instead enter the Society of Automotive Engineers Formula Hybrid competition at Dartmouth. It was a much bigger deal. The team needed $100,000, some 10 times more than required for any previous races. Undaunted, team members planned to take two years to get ready. They spent the first year raising money and learning many new skills from welding to 3D printing to creating electrical systems. They advocated for and succeeded in getting academic courses created that would teach them everything they needed to know.

One thing that was “make or break” in helping Hot Wheelz get the design done on time was independent study in chassis design, Chemielowiec says. “It was really hard because we were starting from scratch, and we didn’t know how to get started. None of us had ever built a car from the ground up,” she says. “I was looking at a white screen on a CAD model, and I had no idea where to start.”

It was so much more than removing nuts and bolts and replacing them as she had done as a young teenager. “It was making my own design,” she says. One of the biggest engineering challenges that she felt Hot Wheelz faced as a first-year team in this competition was the integration of subsystems to make one big system, particularly integration of the mechanical and electrical components. “A lot of teams have been around for years, and the older team members can train younger ones, learning what to do, what not to do,” she says. “Those things are passed along.”

Mounting the mechanical and electrical components together, while keeping them isolated because of the high voltage can be deadly, she explains, adding they must find space on the frame for everything, keep everything lightweight, make sure the wheels really roll and keep it safe for the driver.

By February, 2015, she was ready and began leading the team through the design phase that lasted until December when welding of the chassis began. By the end of March, the team was doing final assembly. They were putting in many hours to be ready for the opportunity of a pre-inspection by the team’s Formula Hybrid mentor, an engineer from General Motors, and a competition judge.

Pre-inspection went “fairly well,” Chmielowiec says. “There is still a lot to do, and we discovered some minor changes that need to be made to ensure we pass at the actual competition. Having our GM mentor there was an incredible boost.” Next up is an engineer from Curtis Instruments to help troubleshoot the electrical system.

Whatever the outcome of the competition, Chmielowiec says, “It’s been a blast, a crazy five years for me,” something she had always dreamed about but thought would never happen. She is also paving the way for her future and will start her career this summer as a tire, wheel, and fastener performance and test engineer at General Motors.

“Ultimately I have always wanted to go to NASCAR. That’s been my dream goal. I didn’t know if it was going to be achievable, but I think I’m on a good track,” she says. “I am glad to be starting at GM because that will give me a good foundation.”

None of us had ever built a car from the ground up. I was looking at a white screen on a CAD model, and I had no idea where to start. Maura Chmielowiec, RIT Hot Wheelz