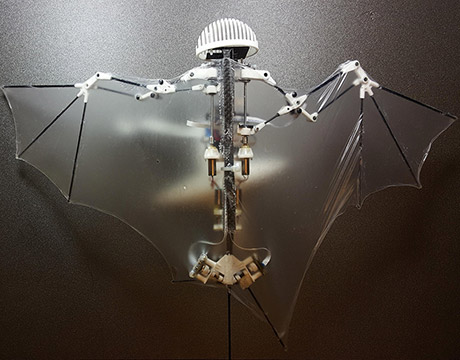 An autonomous flying robot that mimics the flight characteristics of real bats. Image: Alireza Ramezani from University of Illinois at Urbana-Champaign

Aerial robotics engineers have long been fascinated with how bats fly, especially the technological challenges that exist in recreating their high-precision flight patterns and complex wing motions.

“Whenever I see bats make sharp turns and perform upside-down perching with such elegant wing movements and deformations, I become mesmerized,” says Soon-Jo Chung, associate professor of aerospace at the California Institute of Technology and a Jet Propulsion Laboratory research scientist. “Bat flight is the holy grail of aerial robotics.”

That’s because it is so difficult for roboticists to copy the complex flight patterns of a bat. Robotic birds and insects arerelatively easyto create but, with over 40 joints in their wings, bats are a far greater engineering challenge.

Undaunted, Chung and his research team: postdoctoral associate Alireza Ramezani from University of Illinois at Urbana-Champaign (UIUC) and Seth Hutchinson, professor of electrical and computer engineering at the UIUC, set out to reverse-engineer this mammal’s unrivaled agility in flight. Their goal? To build a safe, energy-efficient soft-winged robot that flies like a bat. “We also wanted to challenge the status quo of drones that predominantly use high-speed rotor blades, which are quite noisy and dangerous,” adds Chung.

The result was the creation and successful flight of "Bat Bot," a self-contained robotic bat with flapping, soft, articulated wings that weighs about 93 grams and has a one-foot wingspan (about the size of an Egyptian fruit bat). Driven by a small onboard computer and a series of sensors that allow it to fly autonomously, Bat Bot can alter its wing shape by flexing, extending, and twisting at its shoulders, elbows, wrists, and legs.

Like a real bat, Bat Bot can move each wing independently and constantly change each wing's shape to perform complex maneuvers that would be impossible otherwise. The biggest challenge for Chung’s team was recreating the sophisticated and complex flight mechanism of a bat. Bats rely on several different types of joints that interlock the bones and muscles to one another, creating a musculoskeletal system that is capable of movement in more than 40 rotational directions.

First, the dominant degrees of freedom (DOFs) in the bat flight mechanism were identified and incorporated into Bat Bot’s design by means of a series of mechanical constraints. These biologically meaningful DOFs included independent left and right wing folding motions and dorsoventral movements of the left and right leg wings, such as retraction-protraction of the shoulders, flexion-extension of the elbows, abduction-adduction of the wrists, and dorsoventral movement of the legs.

“It was impractical to incorporate all the active and passive joints of a bat into our design,” says Ramezani.

Instead of using a large number of distributed control actuators, “We implemented highly stretchable silicone-based membrane wings that are controlled at a reduced number of dominant wing joints to best match the morphological characteristics of bat flight,” says Chung.

The robot frame was built from carbon-fiber bones and 3D-printed socket joints. Wing structures were covered with an ultrathin (56 micrometers), elastic, membranous skin. Conventional lightweight fabrics, like nylon and Mylar, did not stretch enough and restricted the forelimb and leg movements. The skeleton array and membrane skin enable the robot to morph its articulated structure in mid-air without losing an effective and smooth aerodynamic surface.

Chung’s team has successfully designed and built a flying robot with an articulated wing structure and a silicon-based skin that mimics bat-like flight abilities.

"We have demonstrated one of the most advanced designs to date of a self-contained flapping-winged aerial robot with bat morphology that is able to perform autonomous flight," adds Ramezani.

The flapping motion also conserves battery power, making Bat Bot quieter and more efficient than its fixed-wing or quadcopter counterparts. With its soft, flappable wings, it could also be a safer alternative to drones aloft with spinning blades, especially in proximity to people, or tight restricted spaces.

When equipped with a radiation detector, 3D camera system, and temperature and humidity sensors, Bat Bot “could inspect something like the Fukushima nuclear reactors, where the radiation level is too high for humans, or fly into tight crawlspaces such as mines or collapsed buildings,” says Hutchinson. “Such highly maneuverable aerial robots, with longer flight endurance and range than quadrotors have, will make revolutionary advances in monitoring and recovery of critical infrastructures such as nuclear reactors, power grids, bridges, and borders.”

Another application could be monitoring construction projects, where “things rarely happen the way they are intended to happen,” continues Hutchinson. “Keeping track of whether the building is being put together the right way at the right time is not trivial. Bat Bots could fly around, pay attention, and compare the building information model to the actual building that’s being constructed.”

Chung is currently working on how to make bat-inspired aerial robots that can actually perch on unique structures, such as steel frames, side walls, and ceiling frames, instead of relying on hovering drones. “This is a more energy-efficient and reliable solution, since stationary hovering is difficult for quadrotors in the presence of even mild wind,” Chung says. “Furthermore, perching or landing conventional aircraft and quadrotors in such unusual places is nearly impossible, due to their limited control authority at slow motor speeds and aerodynamic couplings such as wall or ground effects.”

For Further Discussion
We have demonstrated one of the most advanced designs to date of a self-contained flapping-winged aerial robot with bat morphology that is able to perform autonomous flight.Prof. Soon-Jo Chung, California Institute of Technology