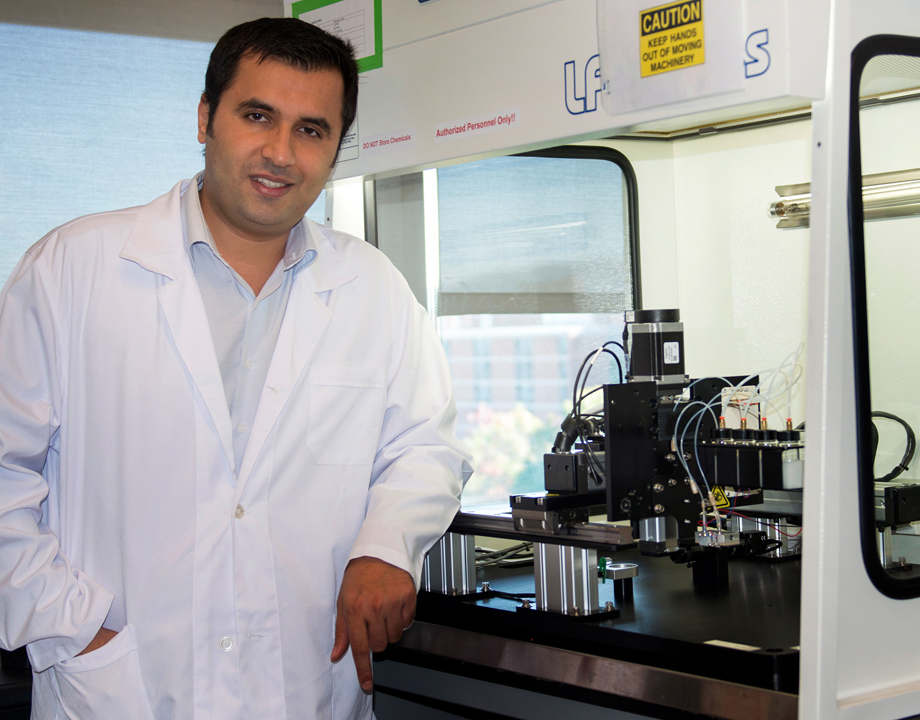 Biomedical Engineering Bioprocessing Equipment
The Ozbolat Lab at Penn State has been working on using human cells to bioprint tissue and organs that can one day be transplanted into people. Recently, it produced two major advancements—bioprinting bone directly in the cranium of rats and three-dimensionally printing a breast cancer tumor—that will give researchers a better way to study breast cancer.

Bioprinting, literally the three-dimensional printing of cells, is used to assemble multiple cell types and biomaterials layer upon layer to make bioartificial organs that imitate their natural counterparts.

Ibrahim Ozbolat, who leads the lab, has long been a part of bioprinting research, including human lung tissues, vascularized tissue, and human organs on-a-chip.

Treating large bone injuries or malformations—referred to as a critical-sized defect—is challenging for doctors because bone can’t regenerate itself across a large area. To close the gap, doctors and engineers traditionally implant bones they’ve grown on scaffolds.

Listen to Our Podcast: Advances and Challenges of 3D Bioprinting in Space

Now, the Penn State researchers have shown they can help heal cranial injuries and defects by bioprinting bone directly within the skulls of rats. The key is incorporating two growth-factor encoding genes that encourage cells to multiply and migrate.

The process paves the way for bioprinting of bone in humans, Ozbolat said.

For bioprinting bone, the researchers used the gene that encodes PDGF-B, a platelet derived-growth factor that encourages cells to multiply and migrate, and gene that encodes BMP-2, a bone protein that improves bone regeneration. The printing method allowed them to deliver both genes together in a controlled manner, Ozbolat said.

The two genes were printed during surgery onto a hole in the skull of a rat. The mixture was created to release a burst of PDGF-B encoding gene in 10 days and a continuing release of BMP-2 encoding gene for five weeks.

"If we dump the growth factors the amounts of proteins are finite, but if we use gene therapy, the cells continue to produce the necessary growth factors,” he said.

The lab saw another first in November 2022, when it announced researchers had successfully 3D-bioprinted breast cancer tumors and then treated them.

That research paves the way for precision fabrication of tumor models, which will allow scientists to study anti-cancer therapies without experimenting on animals, Ozbolat said.

“This will help us understand how human immune cells interact with solid tumors,” he said. “We’ve developed a tool to safely and accurately evaluate experimental therapies. It is also a research platform for immunologists and biologists to understand how the tumor grows, how it interacts with human cells, and how it metastasizes and spreads in the body.”

To print the tumor, the researchers used a relatively new technique called aspiration-assisted bioprinting to precisely locate tumors in three dimensions and create the tissue. The technique allows the researchers to precisely position spheroids—three-dimensional cell aggregates that can mimic tissues and microtumors—and aspirate, or draw them out, to lift individual spheroids and bioprint them onto a hydrogel.

The researchers then formed the tissue into a multi-scale vascularized breast tumor model with blood vessels, which they discovered responded to chemotherapy and cell-based immunotherapeutics.

The researchers used human CAR-T cells that were engineered via gene editing to recognize and fight an aggressive form of breast cancer cells. After 72 hours of circulating the edited CAR-T cells through the tumor, the cells within the bioprinted tumor had generated a positive immune response and were fighting off the cancer cells, Ozbolat said.

But that positive response is not proof the edited CAR-T cells would reduce tumors in people who have breast cancer.

“Our model is made from human cells, but what we make is a very simplified version of the human body,” Ozbolat said. “There are many details that exist in the native microenvironment that we aren’t able to replicate, or even consider replicating. We’re aiming for simplicity within complexity. We want to have a fundamental understanding of how these systems work.” Article
Contact Lens Shifts Focus in Fight Against Glaucoma
Glaucoma, a top cause of blindness worldwide, is being combatted with a new lens that detects early warning signs of the disease by continuously monitoring intraocular pressure and then immediately lowering pressure in the inner eye to slow glaucoma’s progress and prevent ongoing damage—even during sleep.