A Window into Energy Savings

A Window into Energy Savings 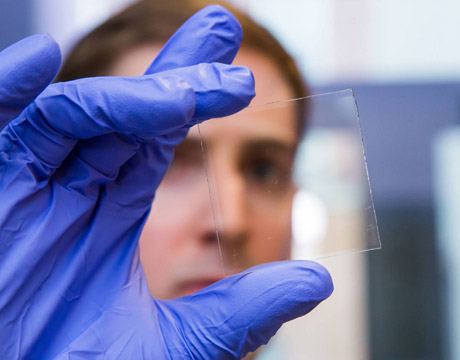 When considering how to save on home energy costs, the thoughts of most people usually go to the heater or air conditioner before the windows.

But windows can offer more than just a view. They can also be the difference in saving homeowners thousands of dollars in energy costs over a home’s lifetime. And Princeton University has been working on a smart window to take advantage of this possibility.

Room with a View

Two different areas of research were combined to give life to this project, says Nick Davy, who is a team member and a Ph.D. candidate in chemical and materials engineering at the school.

“My work was on solar cells and developing the transparent materials for these cells a few years ago,” he says. “Another research area was working on developing polymers, a legacy project that many students had worked on. She [team member Melda Sezen-Edmonds] worked on an electrochromic window and we combined our technologies to work on a smart window. It’s basically ten years of research. I’m on a later generation of these materials and the same thing with Melda.”

One feature of the window includes a smart film that regulates visible light. It’s either clear or tinted and that’s where the control of heating or regulation of sunlight is achieved, Davy says. The second technology is a solar cell that powers that first technology.

“The first technology is also dynamic coating that allows you to have control over the tinting but it comes at a price, which is that it needs external power,” he says. “We’re converting near ultraviolet light to power. There are many electrochromic cells and all require onboard power and are constrained in insulation because of a requirement to have power and external wiring. You have to understand that when you install this kind of electrochromic film, it needs wiring, it adds labor costs and insulation costs and other costs. It restrains how you can use these windows and more, and because of that, it’s used mostly in new buildings - and expensive buildings.”

“You have got a high operating window because the electrochromic cells that comprise the smart window are voltage dependent,” he says. “You have larger voltage from our near ultraviolet cell,” he says. “Ultraviolet light is higher in energy than invisible light and near infrared light. Our cells harvested this near ultraviolet light and produced higher voltage and that voltage is useful.”

Part of the reason to have solar-powered smart windows is to create a wireless window, Davy says, adding that the window blocks more than 80 percent of light and can capture sunlight that is not utilized by smart windows.

“In terms of reducing energy costs and carbon footprint, over half of the buildings that will be in use in 2050 are already built so it’s a huge opportunity to improve the energy efficiency of existing buildings,” Davy says.

For Further Discussion
The first technology is also dynamic coating which allows you to have control over the tinting but it comes at a price, which is that it needs external power. Nick Davy, Princeton University