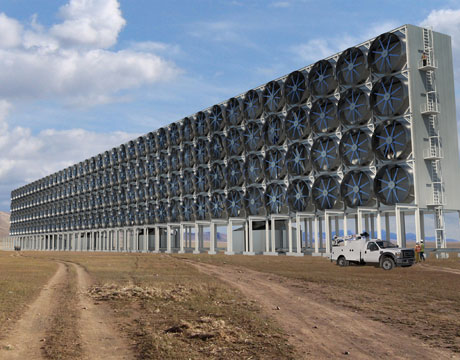 A Wall of Fans Cleans Air

Sometimes a new technology doesn’t have to be super-complicated. For example, Carbon Engineering is designing “air-capture plants” that use walls of fans to strip carbon dioxide from the atmosphere, thereby reducing levels of this greenhouse gas that contributes to global warming.

These plants will be scalable and can be built anywhere in the world to help reduce global concentrations of CO2, in such places as unpopulated areas like deserts. They would also be beneficial in urban areas for capturing CO2 released by cars and trucks.

"Only about 40 percent of our total emissions comes from large flue stacks, and the other 60 percent results from what we call 'diffuse and mobile' sources that can be difficult to tackle at source," says Geoff Holmes, Carbon Engineering’s business development manager. "Capturing them back from the atmosphere may be a key way to help manage these diffuse emissions."

Carbon Engineering’s CO2-stripping technology integrates two processes: an air contactor and a regeneration cycle. These two processes work together to enable continuous capture of CO2 from atmospheric air, with energy (and small amounts of make-up chemicals) as an input, and pure CO2 as an output.

Fans draw atmospheric air into the air contactor, where it is combined with a CO2-absorbent capture solution. Once the CO2 in the air has been naturally absorbed by the solution and converted to a salt, it is sent to a regeneration cycle.

The regeneration process involves several processing steps. Carbon dioxide is extracted while regenerating the original chemical solution for re-use in the contactor. The extracted CO2 is combined with all the CO2 from the systems energy use, and both are delivered as a high-pressure pipeline-quality product. This cycle is an innovation based on a 100-year-old industrial process developed from existing technology. The CO2 can be stored or combined with hydrogen to make more fossil fuels.

Carbon Engineering has built an air-capture demonstration plant in Squamish, British Columbia, that is in full operation, removing about one ton of CO2 from the air every day. The CO2 is processed through all the major subsystems that will be required to operate a future full-scale commercial plant.

The air-capture plant is surprisingly quiet; about 80 decibels only one meter from the structure.

“We will take the data from the Squamish operation and use it to create a very precise, accurate final design for large-scale equipment,” says Holmes. Carbon Engineering plans to build a first-of-its-kind commercial plant in 2017 or 2018 that will produce 10,000 barrels of synthetic fuel in a year.

Captured CO2 can be stored underground or used to make low-carbon fuels. There is a growing market for liquid fuels with low life-cycle carbon-intensity. California has a low-carbon fuel standard in effect, and similar initiatives are under way in other states, Canada, and Europe.

"These fuels have the same chemical make-up as fossil fuels, but are sourced from air and sunlight rather than from crude oil," says Holmes. "Air capture plus fuel synthesis is potentially one of the few truly scalable ways to power transportation in a way that’s carbon-neutral."

Direct air capture is scalable and requires a relatively small footprint. Air-capture plants do essentially the same work as trees and other vegetation, but require for less space. Carbon Engineering hopes its technology will be part of a larger, coordinated effort in the clean-tech industry.

"No single technology or approach is enough to help avoid climate change. We need every option we’ve got, and more," says Holmes. "Air capture has the potential to be a big help in cutting emissions that are difficult and costly to reduce at source, and that will add to the momentum that’s building in other sectors of the clean-tech industry.”

For Further Discussion
No single technology or approach is enough to help avoid climate change. We need every option we’ve got, and more. Geoff Holmes, Carbon Engineering