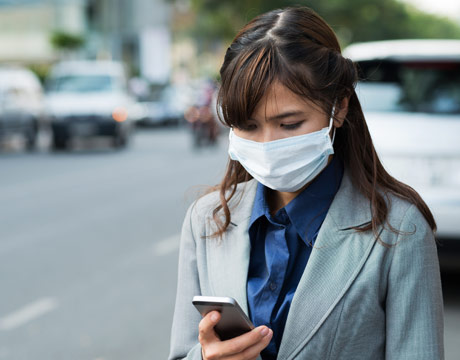 A Sensor to Breathe Easier

Kevin Hart, CEO and founder of Canada-based company Tzoa, was an electrician who was concerned about the effects of carcinogens, such as dust in the air. He realized there was a disconnect between what people could perceive and what was threatening to them. “I was looking for a solution for myself and couldn’t find it and saw an entrepreneurial path,” he says. “I saw a challenge to myself and saw [toxins] are not just in industrial sites but many homes around the world. The technology that was existing to combat a lot of this to me was big and expensive. I thought there must be something people could have.”

He says the main proprietary sensor of the Enviro-Tracker picks up PM2.5, among the most dangerous pollutants in the environment. “It’s particulate matter in the air. [It] can get into lungs and create long-term damage and aggravates people even in terms of cardiovascular issues,” he says. “There’s also VOC, which is total volatile organic compound and it’s another particulate type that is an enemy.”

There are several components to the sensor that he can talk about as they are not proprietary. “There is an airflow channel. Air is brought in through an inlet and [pushed] out through an outlet,” he says. “In the channel is a detector that detects light and the channel is occluded from the sun. There’s a separate channel that crosses in an ‘X.’ That’s what the optical emitter lives in, a visible laser that goes from one part of an X to the opposite end of one channel, into a beam dump, meaning it gets rid of the laser.”

The first prototype was four inches by four inches but now the model is the size of a large Oreo cookie, he says.

There have been multiple iterations of the technology. With the first generation, the team realized that the technology became contaminated quickly. “Imagine an air stream and biomass burning with gunk sticking to the air channel, and the sensor becomes inaccurate,” he says.

The device, which comes in both wearable and portable formats, is slated to talk to your phone and let you know, not unlike traffic apps, what to avoid: environmental problems instead of a pile-up on your local highway.

“There’s also the thought in the future of the connected element of understanding, of where you are or what situation you’re in. If in a home or building, this sensor data could automate your surroundings, might turn on an air purifier for you, et cetera. Also, if you have a debilitating condition like asthma or COPD, [you could have] an analytics component for an additional service. If you have exacerbation of asthma multiple times, then highlight when it’s occurred and look at pollution in a moment in a past day. We can look at the environmental context where there was an acute system and look at the common thread or trend and then predict what it was.”

There’s a crowdsource element concept slated as well. A cyclist could possibly benefit greatly. “Data you collect talks to data others collect,” he says. “Visualized on the map so cyclists will share their data and build the pollution routes. Trying to get from Point A to Point B when cycling to work, taking into account if there is high combustion from car engines and more. This could help.”

The Enviro-Tracker has done smaller beta testing and a large production launch is slated to happen in 2017. “We want to make lives healthier,” Hart says. “We just don’t always know what’s around us.”