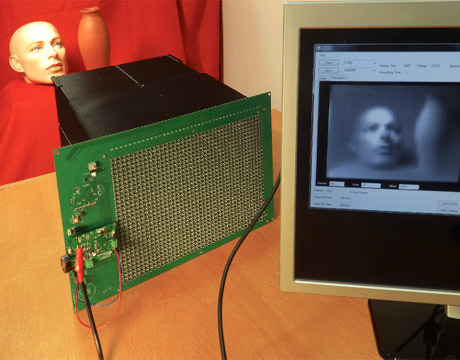 As Dr. Shree K. Nayar, professor of computer science at Columbia University’s Fu Foundation School of Engineering and Applied Science, thought about what would be useful devices for visual communication in the digital age, he zeroed in on what he later described as an “eternal” video camera, one that could power itself and communicate information wirelessly and conceivably operate forever.

After several years of work, the engineer known for his expertise in computer vision, computer graphics, and computational cameras has invented a prototype of the first fully self-powered video camera. He and his team, which includes research engineer Daniel Sims, a recent graduate in mechanical engineering from Columbia, and consultant Mikhail Fridberg, have redesigned a pixel that can not only measure incident light but that can also convert the incident light into electric power that runs the camera.

Nayar says this is just the tip of the iceberg. “Digital imaging is expected to enable many emerging fields including wearable devices, sensor networks, smart environments, personalized medicine, and the Internet of Things. A camera that can function as an untethered device forever, without any external power supply, would be incredibly useful,” he notes.

The measurement of light happens very quickly (in milliseconds), while harvesting happens over a longer time. “The mode we have it running in now is alternating. You measure an image and then you harvest,” he says. The camera can produce an image each second of a well-lit indoor scene.

Noting that it’s hard to actually identifythe point in time when his idea took shape, Nayar says his thoughts went something like this: “I’m acutely aware cameras measure light, and light is also used to generate energy. I’m also aware that it would be very useful to have devices that can produce visual information, which is what cameras do, and have them distributed in space whether in a smart environment or the Internet of Things. There are all kinds of applications where you want a camera to be a stand-alone device. My thinking was, ‘How does one enable a camera to harvest energy for itself without adding in any substantial way to the cost or the size of the camera?’ What that means is that the imaging itself should be able to harvest energy. That was the beginning of the process.”

Nayar drew upon his knowledge that although digital cameras and solar panels have different purposes, both are constructed with one common key component: a photodiode. In a digital camera, in which the photodiode is a key enabling device in a pixel, the brightness of the light is measured. In a solar panel, the photodiode converts incident light to electric power.

“My thinking was: ‘Can you redesign the pixel itself so that in a seamless way it will be able to serve both roles either at the same time or at different times?’” he notes.

Others looking to achieve the same goal have proposed that the pixels of the image sensor be divided into some that measure light and others that harvest energy. But that sacrifices valuable real estate with those sensors behaving like a solar panel, he says.

Using off-the-shelf components, the team did its first test of the redesigned pixel with a single pixel to confirm that within a reasonable time, it can take a measurement and also harvest energy. After that successful test, the team built a 5x5 array on a printed circuit board, and then built the 30x40 prototype housed in a 3D printed body to demonstrate the proof of concept.

“We [chose that size] not because there were any restrictions with respect to the number of pixels, but because it was on a printed circuit board, and each pixel had to be mounted,” Nayar says. “It would be incredibly expensive if it were larger, and you don’t want to invest in a chip because of the expense to fabricate for a prototype.”

Once the approach worked in the 30x40 size, they knew it could be mapped to a chip. There, it can be any number of pixels without affecting the cost.

The next step is to miniaturize and make it a chip. When you reduce the size of the image sensor and make it the size of a chip in a mobile phone, it receives less light and will harvest less, but the power consumption goes down too, and the team is hopeful they can produce even higher resolution.

Nayar is hesitant to make any predictions about commercialization. He sees it as a moving target and not because of technological barriers. “It can be more about inserting them into products that have been planned for the next five years, and that’s driven by various market factors,” he says. “It’s more about finding the right applications, and to a certain extent it will depend on how certain emerging fields evolve: the Internet of Things, smart environments, wide area surveillance and monitoring, and what their needs are.”

And when the team set up the camera, and it just started running without any power going into it and began producing imaging? “I must say it was kind of cool,” he says.

For Further Discussion
A camera that can function as an untethered device forever—without any external power supply—would be incredibly useful.Prof. Shree K. Nayar, Columbia Engineering