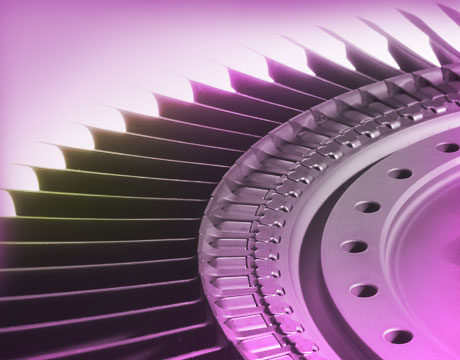 Large GT manufacturers have taken different approaches to increasing efficiency, including increasing overall mass flow, increasing compressor pressure ratio, and increasing the temperature of the air entering the turbine. The latter, increasing the firing temperature, is the most common and most technically challenging.

As the temperature of the air entering the turbine has increased to be higher than the melting point of some of the materials that come in contact with hot gases inside the turbine, manufacturers have not only had to develop specialty turbine blade materials, but also new blade designs, coatings, and cooling technologies specifically to enable robust, reliable operations at these “ultra-high” temperatures.

According to Carlos Koeneke, vice president of project engineering and quality assurance at Mitsubishi Heavy Industries, many of these types of advancements have led the way for operation at turbine inlet temperatures of 1,600 degrees C, achieved during the last year.

“The biggest challenges with increasing the temperature were the materials exposed to the hot gases, which have historically limited the temperature in the past,"he says."We’re getting to the point where we can’t further improve the materials, and are now using thermal barrier coatings as facilitators. Also, internal cooling is now needed, which ‘steals’ some energy from the system but enables operatio.”

As a result of higher firing temperatures, mega turbines not only produce higher amounts of power, but higher power density as well, so fewer turbines are needed to generate the same amount of power. On a dollar-per-kilowatt/hourbasis, the price is lower for mega turbines, since power plants actually spend less in construction, footprint, and installation.

Despite having high efficiency, these new GTs in combined-cycle power plants are challenged when it comes to operating efficiently under variable loads. Flexibility, which can refer to the ability to start and stop frequently or rapidly, is becoming more important as more generating plants receive power from sources such as wind and solar.

Achieving high efficiency in a combined-cycle plant requires operation at constant base loads or at “full load,” or peak operating conditions. “It’s not that long times are needed to achieve high efficiency, but they don’t react well to big changes,” Koeneke says.

Single-cycle GT systems that are faster to react are now able to operate more efficiently when “parked” at lower loads, and are also maintaining emissions compliance over wider load ranges. Some power plants are adopting multiple systems, both combined and single mode, for more flexible operations, since a single system cannot perform well in both modes.

Efficiency has long been the goal in designing and operating gas turbines. Having achieved greater than 60% efficient emissions-compliant operation, the new-era turbines are entering what could be referred to as “flexible efficiency,” as the focus shifts toward the ability to adjust to new types of demands for efficient operations.

The biggest challenges with increasing the temperature were the materials exposed to the hot gases, which have historically limited the temperature in the past.Carlos Koeneke, vice president of Project Engineering and Quality Assurance, Mitsubishi Heavy Industry

Quiz: What's Up with Hydrogen