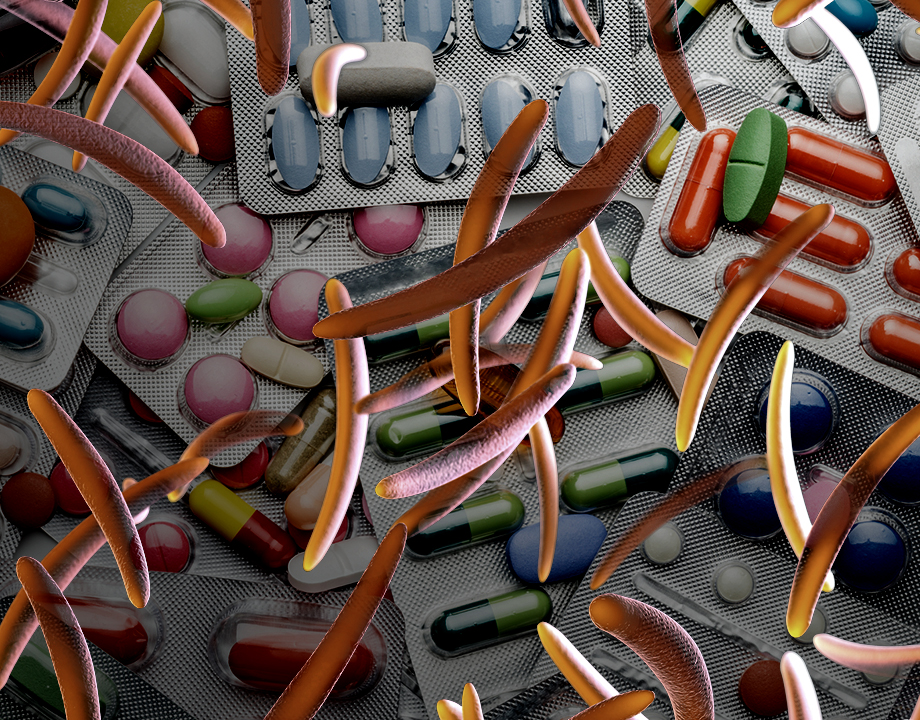 To keep our medicines in our body for a longer release, engineers at Johns Hopkins have turned to the denticulation of the hookworm.

Patients don’t always listen to their doctors, especially when it comes to medication: More than half of all prescribed drug regimens go unfinished. And of the drugs we do take, 90 percent flows through the gastrointestinal tract and exits the body unused. So doctors are eager to develop pills with an effective extended release.

Arijit Ghosh, a research scientist in the chemical and biomolecular engineering department at Johns Hopkins University, and his colleagues, set out to find a way to keep drugs in the GI tract longer. “We looked into the natural world, as many other scientists do,” he said, “and we saw that the hookworm latches onto the intestine for several years by digging their teeth into the intestinal tissues.” He was inspired.

Ghosh and his team are not the first scientists to try to keep drugs in the body for longer. One line of research has tried to develop a delivery device that is larger than the pyloric sphincter—the opening between the stomach and the small intestine. While such devices do manage to stay active by avoiding entry into the lower portions of the GI tract, they also manage to prevent food and fluid from entering the lower parts of the GI tract.

Hookworms, on the other hand, have overcome this issue. One look at their nasty little mouths and their technique is obvious: the parasites sinks their sharp triangular fangs through the mucus layer, into the intestinal tissue, and hold on. Thus they can stay for years, enjoying the fruits of our meals and reproducing with ease. 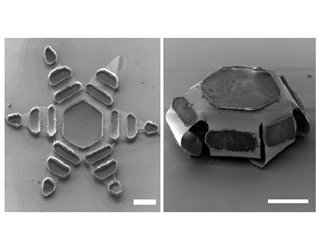 When an open theragripper, left, is exposed to internal body temperatures, it closes on the instestinal wall. In the gripper’s center is a space for a small dose of a drug. Credit: Johns Hopkins University
To create a drug delivery system with a similar bite, Ghosh has created tiny dust-sized six-pointed stars out of thin films of chromium and gold. Held flat by a wax substrate, the metals are kept in a state of tension, ready to spring into action. “Chromium and gold have two very different stress values,” said Ghosh. “As a result, whenever you have a bilayer of chromium and gold, if you take it off the substrate it will roll up.”

The wax he used is temperature sensitive. When it warms up to body temperature it softens, setting the teeth of the theragrippers—as they’re calling them—into motion. Once attached, they can maintain their grip, slowly releasing whatever drug they’ve been coated with, for many days. But don’t worry, they won’t stay there permanently. The points of the star only penetrate two or three cells into the intestinal lining—less deep than the bite of an actual hookworm—and that layer is replenished every week.

The ersatz parasite is dirt cheap to produce, as it’s made with the same manufacturing methods used to make computer chips. And, instead of 10 to 15 layers, it requires only two or three. “We can literally make millions of these in one go,” said Ghosh. And there’s no real limit to what drugs the stars can carry—as long as they are water soluble.

So far, the theragrippers have successfully latched on to the guts of live rats and pigs. But there’s plenty of room for improvement before Ghosh and his team move to human trials. For optimal penetration of GI tissues, they need to find the ideal film thickness, wax quantity, and claw shape. They also need to up the amount of medication each star can hold, as well as increase the ability of drugs to adhere to the stars.

But it won’t be long before the ill among us may gladly swallow thousands of mechanical hookworms to play host to a lasting effective treatment.