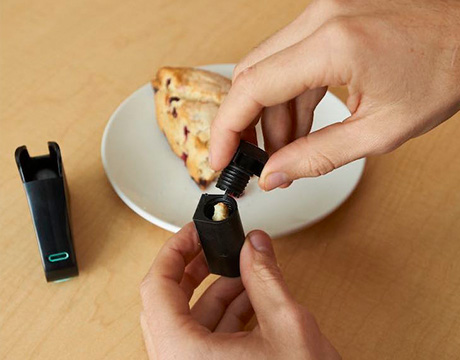 Shireen Yates, CEO and co-founder of San Francisco-based Nima, was once just another person suffering from celiac disease. “I found out I could not process it [gluten] back in college, about 14 years ago, and I had stomach aches,” she says. “I never had issues before and found out I had food intolerances, gluten among them. I found people were getting more aware of how food was affecting them and I wanted to be a part of giving people better information for what they were putting in their body.”

She believes going to MIT for business school helped put her in touch with engineering that could help. “Multiple important members of the company went to MIT for engineering and we agreed that we wanted a product that took less than five minutes to get an answer, and then even faster. To keep pushing," she says. "You vary different textures and types of food, not measuring the type of food in the system. It was about how do we normalize it and could we accurately say there was or wasn’t gluten at a certain threshold.”

The chemistry-based sensor developed involves an antibody-based assay that breaks down the food that the user puts into a capsule. “It breaks down the food and extracts the proteins for a complex food matrix,” Yates says. “The disposable unit has a test strip that is coated with antibodies and the chemistry is ultimately triggered. The strip dissolves and the sensor finds if certain proteins are on the strip. Gluten will bond to it to make the color change and get picked up by a reader.” There are other gluten testing products that use spectroscopy involving a laser, Yates says, and look at the molecular component of what you’re scanning, but she doesn’t feel that route gets the same level of detection.

Dr. Jingquing Zhang, a scientist for Nima, explained in a 2015 presentation on the Nimasensor YouTube channel that if there isn’t a signal on the sensor then the food item has no more than 20 parts per million, the maximum amount the FDA allows in order for the item to be called gluten free. Zhang, who has a Ph.D. in chemical engineering from MIT, further mentioned that the sensor had been tested on items such as tacos, omelets, and noodles but not fermented drinks such as wine.

The sensor works with a lithium-ion battery and is a USB-charged device. Each test costs $3.99 and takes between two and three minutes and the sensor could be purchased for $199 at the time of the interview with Yates. It is slated to retail at $249 when it comes out in the fall.

Once a food server herself, Yates believes the product can provide peace of mind not only for those expecting their food but for the restaurant that wants the customer to have a good experience and not end up sick. She also says the goal is to expand to allergens such as peanuts and milk, with those sensors being developed for 2017.

“I know firsthand what gluten issues can do to someone and the difference you feel when it’s taken out of your diet,” Yates says. “People shouldn’t have to suffer when they just want to enjoy a meal.”

Learn the best practices for bringing your research to market and creating marketable solutions at ASME’s COMS 2016.

For Further Discussion
I know firsthand what gluten issues can do to someone and the difference you feel when it’s taken out of your diet. People shouldn’t have to suffer when they just want to enjoy a meal.Shireen Yates, CEO, Nima