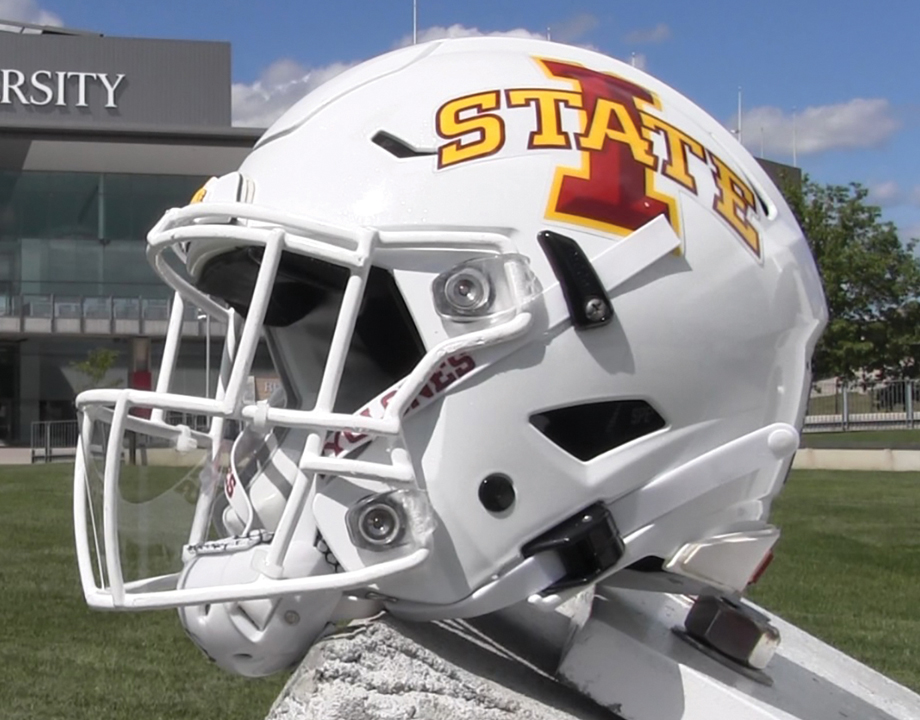 A Football Helmet to Keep COVID-19 at Bay

It’s very hard for football players not to maintain distances during games. Tackle is, after all, the name of the game in this contact sport. So how to keep them safe from the potential spread of COVID-19? One university has what it hopes is a helpful aid.

This season, football players at Iowa State University in Ames are wearing helmets that include clear face shields specially designed to be mounted on the face mask. The design plans are available online for free and may be particularly useful for high school teams where funding and other resources might be short, the face shield designers say. Each shield cost about 50 cents to make.

Iowa State’s Cyclones compete in the Big 12 Conference of the NCAA.

“It guards the spit from flying forward out of the helmet,” she said. “It won’t prevent 100 percent of a person’s breath from moving beyond the helmet but will cut down on direct exhalations when people are three feet apart.”

The inserts are made from Lexan polycarbonate film ten-thousandth of an inch thick. The material maintains stability, durability, and flexibility even at extreme temperatures, and it’s already used extensively in other similar applications like visors and helmets, said Matthew Frank, ISU professor of sustainable design and manufacturing, who also worked on the project.

“We needed a material that was just rigid enough to hold a curved shape, yet pliable to conform to a variety of facemasks and be easy to cut and produce at a rapid manufacturing pace,” Frank said. The design has been tested in and withstood temperatures from -112 degrees Fahrenheit to 107 degrees Fahrenheit.

The design for the face shields came together in a matter of days, Potter said.

Potter was walking her dog in early August when she received a phone call from Michael Dryer and Chase Clark, two equipment managers for the Iowa State football team. “They were talking about student and staff safety and they needed something within about 20 days,” she recalled. “By that afternoon, we were working together.”

The equipment managers took their problem to Potter because her department has had a longstanding relationship with the Iowa State Athletic Department. Students in her “Introduction to Industrial Engineering” course regularly tour the athletic-equipment facilities, which Potter describes as high tech and “demonstrating classical industrial engineering thought processes.”

In that first online meeting about the face shields, Potter, Frank, and the equipment managers met to talk about what Chase and Dryer hoped the face shields could look like as well the challenges they had with designs already on the market. For instance, the pair had issues mounting existing shields within football helmets and they had doubts as to whether those shields could stand up to the rigors of a college football game, Frank said.

“We spent that night working with drawings that we took into the CAD realm and by that weekend we developed a basic idea for the prototype,” Frank said. “We needed something thin and clear because players must be able to see in their peripheral vision. It needs to go in front of their mouth and we wanted it rigid enough to take shape when you formed in but pliable that it can be bent into shape fit inside the helmet.”

More for You: Why is Diversity in Engineering a Major Opportunity?

The shields can be cut out at the rate of one shield every 40 seconds. An 11-inch by 11-inch sheet of Lexan film provides enough material for three mask inserts at a cost of less than 50 cents per shield, Frank says.

The engineers had one very important tester who was able to give the prototype for the Cyclone Shield a real-word workout. Blake Clark, the Cyclone’s quarterback, is also an industrial engineering student.