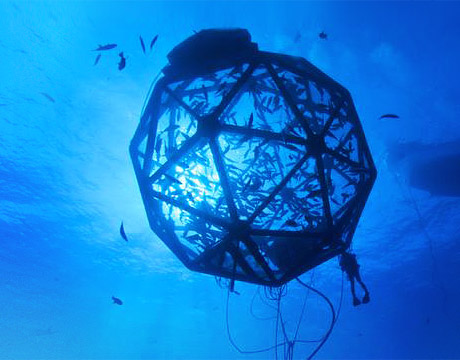 Steve Page, founder and general manager of Ocean Farm Technologies, thought of the Aquapod from his days working at Atlantic Salmon of Maine, a fish farming company, as an environmental compliance officer andother ancillary roles.

Page, who graduated from Stanford University with a degree in environmental sciences, says he saw an opportunity to improve the engineering behind fishing netsbecause suspended fish pens can get heavy during the lifecycle of a crop of fish and it can, at times, be difficult for people to haul it. “I thought it would be easier for this type of activity to expand in the kind of conditions when we’re not close to shore,” he says.

He also recognized the environmental benefits of his device, including when it comes to fish feeding. “I find the usual fishing has feces build up and deposit in a pile underneath the fish pen,” he says. “That accumulation of organic matter goes anaerobic and doesn’t decompose. It can create a dead zone when you’re talking about shallow fish pens.”

To create the Aquapod sphere shape, the concept he envisioned incorporated geodesic domes. He also thought in terms of modularity in the design of triangular panels that are human scale and can be handled. “The Geodesic dome is not strong unless the base of the dome is stabilized—then the base is very flexible,” he says. “The entire structure gets incredibly strong.”

The Aquapod’s triangular panels are made out of fiberglass and reinforced plastic. The netting is made out of galvanized steel wire, which the Ocean Farm Technologies website says helps with predator issues. “Each individual panel is standalone so that these panels are then fastened together,” he says. “A huge advantage is that the polyethylene is buoyant and the specific gravity is about .91, along with being perfectly balanced with steel wire. Each Aquapod is in a grid, submerged, and we can rotate it in the water remotely.”

For submersion, the Aquapod is installed in a mooring system with anchors. The company site explains the concept behind the moorings in terms of raising and lowering cages: “The simplest way to maintain a specific depth is to keep the pod slightly negatively buoyant, so that it 'hangs' lightly from the mooring bridles. Mechanical raising and lowering have specific advantages to decompression-sensitive species. Cod growers realize the advantages of this system over containments that are pneumatically controlled. For species that are not decompression-sensitive, we incorporate specific air chambers for raising and lowering.”

Feeding is also done differently. “Conventional surface pens are fed with a blower system and take pellet-sized feed and put it through a sophisticated blower,” Page says. “It’s put on the surface so fish come to it. Since ours is underwater, we use a system that mixes feed with seawater, then pumps it in as a slurry.”

The tallest Aquapod deployed so far is 72 feet high and Page says they’ve built one that is 81 feet high. The 72-foot unit can hold 94 tons of fish, he says.

Still, Page sees possible improvements down the line. “We think we can make it stronger and lighter through material science research,” he says. “We’re also looking at different fastening systems for the steel net and possibly adding robotics for net cleaning. I think we’ve improved the process for this industry but there’s more work to be done.”

For Further Discussion
The Geodesic dome is not strong unless the base of the dome is stabilized—then the base is very flexible. The entire structure gets incredibly strong.Steve Page, founder, Ocean Farm Technologies