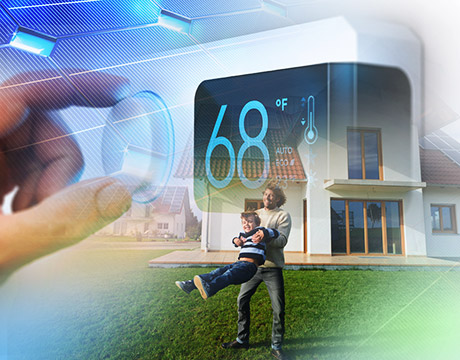 Clean energy, particularly solar power, has been growing so fast that the relatively sudden economic viability and ease of access to solar energy has taken a lot of people by surprise.

Christiana Hosnberg, director of the Quantum Energy Sustainable Solar Technologies Research Center and an engineering professor at Arizona State University, says she expects within the next five to 10 years this will mean not only dramatic technological change but also changes greatly affecting daily life. The significance is “absolutely stunning,” she says. “The making of photovoltaics economical has increased the amount of energy that society has available by a factor of 1,000 or more. You see those kinds of increases only in [times such as] moving from horse drawn carriages to rotating machinery.”

Here are five areas in which she sees this excess energy having major impact:

Until recently, the main focus in developing workable photovoltaics for buildings has been making them functional and affordable. Now that costs are coming down, researchers are thinking far beyond square and boxy to incorporate attractive architectural elements into the integration of photovoltaics in buildings.

“Some are hardly recognizable as a photovoltaic,” Honsberg says. “One way becoming popular in the Southwest is putting photovoltaics on shade structures. In this instance, the photovoltaic has a dual function; one function is generating power and another is providing shade. And this is just the tip of the iceberg.”

As the performance of flexible solar cells has increased, they also offer potential for more interesting design, for example, curved on a roof to enhance architectural ambience.

The residential electricity infrastructure has not changed in almost a century other than some advances made in efficiency. But that is already changing and expected to be even more dramatic with the adoption of smart electrical controllers.

“The electricity function will be very different from walking into a room and flipping a switch, the way people interact with a system today,” says Honsberg. “This will make it far easier to incorporate photovoltaics and make that a large fraction of a home’s energy source. Going from ‘I know I have electricity and if I flip a switch the lights go on’ to ‘I can change the temperature from my iPhone’ will be very different.”

Electric vehicle charging will also be more prevalent, and solar is ideal for power charging stations because it also helps with grid integration, she says.

“Everything we think about how people interact with their house electricity today will probably come up for review and change. You are already seeing lots of bits and pieces popping up,” she says, citing the Nest thermostat, lights having transmitters and lights that communicate with a cell phone. “There will be a lot of benefits, including a dramatic increase in the use of renewables and more efficiency, but like any dramatic change, there will be a lot of challenges as well.”

Historic water shortages in California and other locations are becoming more of a new normal than a short-term problem. One solution is water desalinization, but the cost of electricity to do so is extremely high, and electricity usage in these areas is typically already high.

The U.S. Environmental Protection Agency notes the use of water and the use of energy are intricately intertwined because both the preparation and disposal of water require a lot of energy and, in turn, current methods to produce energy require a lot of water. According to the Public Policy Institute of California, approximately 20 percent of statewide electricity use and 30 percent of business and home use of natural gas goes into handling water.

Less expensive solar power and all of the expected excess power available due to photovoltaics can be a long-term solution. “As you get cheaper and cheaper renewables, water desalinization becomes an interesting option,” she says.

Although an entire electricity system can be converted to renewables, that’s not true for fuels, and there is a substantial amount of investigation into how to get from solar energy to a fuel. Conceptually, the simplest is to use photovoltaics to run an electrolyzer to make hydrogen, Honsberg says. But that has the most technical challenges because there are not that many devices or that much equipment that run on hydrogen right now. A lot of parallel development would be required.

If the whole process is examined, one might not go directly from solar to a fuel, she says. Another idea discussed is to first generate hydrogen and then make methane, which fits into a more traditional fuel stream. Because of these challenges, solar-powered fuels are much more likely to be longer term in coming than some other nearer term benefits from renewables, Honsberg says.

Photovoltaics can be readily integrated into a wide range of applications, enabling increased power for devices used in fields as diverse as medicine, aerodynamics, and other industrial applications such as water salinization. The question: How is all of the extra available energy going to be used?

“Society has to figure out what it wants to do with a thousand times more energy than it had before,” Honsberg says. “Some people say we should address problems like water. Some think it would have a greater impact to develop fundamental things like continuously monitoring health. It ranges from solving extremely critical world problems to fundamentally new enabling technology that we don’t have today that changes the way society operates. These are very different classes of impact.”

For Further Discussion
The making of photovoltaics economical has increased the amount of energy that society has available by a factor of 1,000 or more.Prof. Christiana Hosnberg, Arizona State University