"4D" Printing: The Next Level of Additive Manufacturing

"4D" Printing: The Next Level of Additive Manufacturing 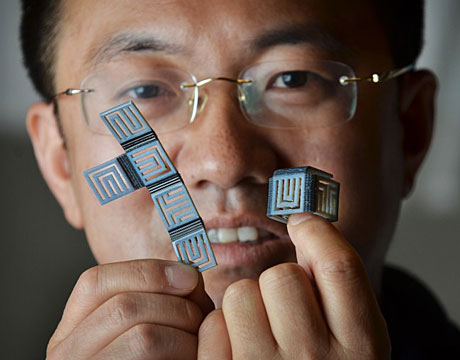 3D printing has everybody talking these days, but a team of researchers at the University of Colorado-Boulder just upped the ante.

In 2013, H. Jerry Qi, associate professor of mechanical engineering at CU-Boulder (now associate professor of mechanical engineering at Georgia Institute of Technology), and research partner Martin L. Dunn of Singapore University of Technology and Design, successfully developed a process called “4D” printing.By incorporating “shape-memory” polymer fibers into composite materials, a 3D printer can be used to manufacture a 3D object that, when later heated or cooled to a specific temperature, will transform into a different 3D shape.

Qi’s research is based along the lines of earlier work by Skylar Tibbits, a research scientist at MIT’s department of agriculture who has also studied self-assembly of materials into 3D structures. The key to the CU-Boulder breakthrough is the development of unique “printed active composites” whose architecture is carefully designed to include precise locations of certain shape-memory fibers that will behave a certain way when exposed to an external stimulus, and “morph” into the predetermined shape.

With funding from the Air Force Office of Scientific Research and the National Science Foundation, Qi’s research team created specific fiber architectures at the lamina and laminate levels, for several composite materials. “There is considerable design freedom for creating composites with interesting thermomechanical behaviors based on fiber architecture, shape, size, and orientation, and even the spatial variation of these parameters,” says Qi.

The printed active composites (PACs) are soft materials consisting of glassy polymer fibers that reinforce an elastomeric matrix. These fibers exhibit the shape-memory effect, which is used to create the “active” part of the composites. The PACs are then thermomechanically programmed to assume three-dimensional configurations such as bent, coiled, and twisted strips, folded shapes, or complex, contoured shapes with nonuniform curvatures.

“The shape change is controlled through the design of ordered material structures or inhomogeneities at micrometer scale,” says Qi. “Inhomogeneities are widely used in mechanical engineering to enhance material performance. The inclusion of inhomogeneities is typically done randomly, as it is very difficult to control precisely where they can be placed. However, with 3D printing, the desired properties (which can be predicted by theory) can be achieved, which gives us the ability to control the performance of the material.”

The complete 3D architecture of the fibers and matrix is printed from a CAD file using an Objet Connex 260 3D printer. Droplets of polymer ink are deposited at about 70 °C, wiped into a smooth film, and then UV photopolymerized. This process results in a film that contains matrix and fiber material. The complete composite architecture is then realized by printing multiple film layers to create an individual lamina; multiple lamina then create the 3D laminate.

Using this technology, Qi created solid objects that successfully transformed into different shapes as predicted. For example, two-layer laminate bars transformed into curved or twisted shapes. A sheet of laminate material took on its pre-programmed non-uniform curvature, resembling a sculpted surface. The most impressive example consisted of two-layer PACs that were printed to serve as hinges, attached to six plastic plates not meant to deform. The flat configuration was heated and stretched biaxially; upon cooling and release of the mechanical loads, it assembled perfectly into a closed box.

The ability to create shape-memory effects like folding, curling, stretching or twisting—based on the orientation and location of particular fibers within composite materials—opens up huge possibilities for product design. It may also be possible this shape-altering technology can be adapted to metals and other materials.

Industries that can especially benefit from the use of adaptive, composite materials include manufacturing, packaging, and biomedical. A possible aerospace application is using 3D printers to build solar panels that would power space satellites. The panels could be built flat and stored compactly during launch, and then transformed to 4D dimensions in space.

As 3D printing technology continues to evolve with more complex, printable materials and higher resolutions at larger scales, it is very likely that 4D printing will provide new ways to create highly functional, complex surfaces that could revolutionize engineering.

Participate in ASME's Advanced Design & Manufacturing Impact Forum, focusing on the intersection of advanced design and manufacturing in industrial and consumer applications.

The ability to create shape-memory effects like folding, curling, stretching or twisting … opens up huge possibilities for product design.