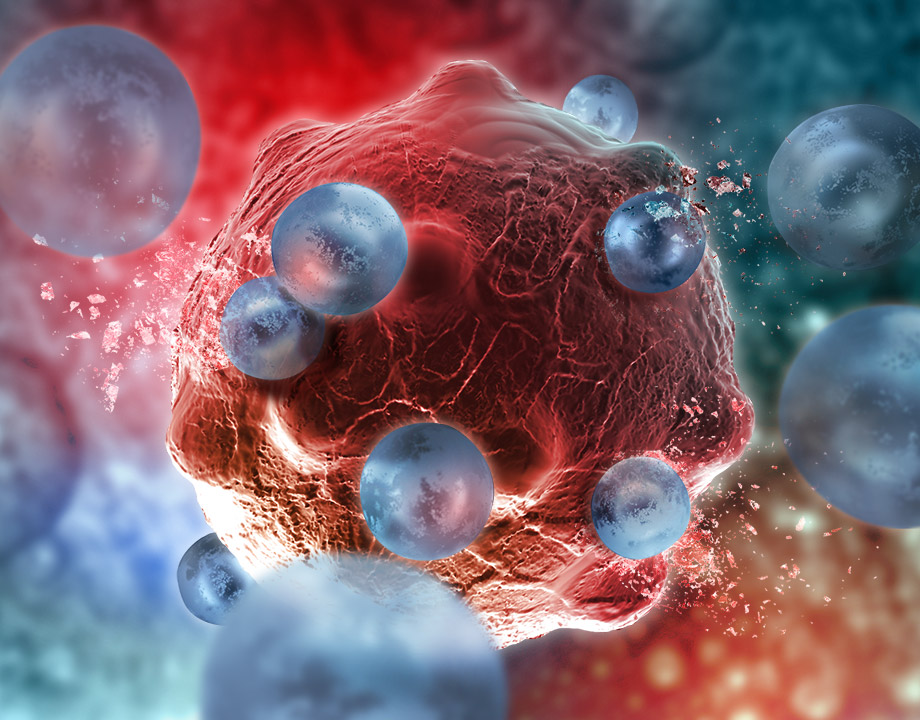 Nanoscale drug delivery is allowing doctors and scientists to target specific areas of the body for treatment—lowering the amount of medicine given and its side effects.

Nanoscale drug delivery is one of the growing bioengineering trends for 2020. By using specially crafted molecules to deliver drugs to exact areas of the body, it allows doctors and scientists to deliver drugs more effectively and accurately. Since these drugs are going directly to the source instead of being absorbed by the entire body, the dosage of medicines can be lower, which in turn lowers the potential negative impact on the patient. Let’s examine the current research on delivering nanomedicine in the human body and how each method devises a unique and effective solution.


Synthetic ProtoCells from Penn State will be able to deliver drugs to specific target areas by using enzymes. These protocells can be designed to move toward or away from any chemical signals. The direction can be controlled in a chemical gradient within a microfluidic device.

The enzymes react and move in response to specific signals which are being sent out from the infection site. This process is called chemotaxis. Previous research mainly focused on positive chemotaxis, the movement in the direction of the chemical reaction. The research being conducted at Penn State is using the ability of negative chemotaxis to have the drug be able to drive toward and away from different chemical signals. 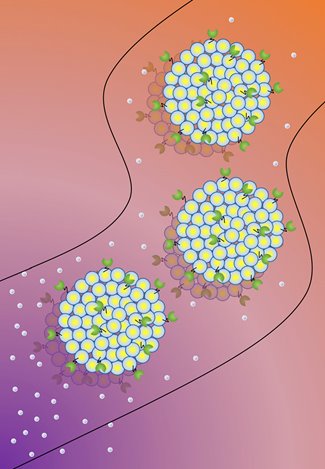 Tunable chemotaxis protocells called liposomes, have enzymes (green) attached to their external surface. Depending on the enzyme, they can move toward or away from gradients of chemical signals (grey dots) for precision drug delivery. (Photo: Ambika Somasundar, Penn State)
The researchers created uniformly sized protocells called liposomes that mimic the same composition of natural cells. Then the enzymes catalase, urease, and ATPase were attached to the outer surface of the protocells. The catalase-coated protocells move closer to their reactant, the urease-coated protocells move away from the reactant, and ATPase-coated protocells can move toward and away from the reactant. “Tunable” chemotaxis provides the ability to control the direction of the drug for a more effective form of drug delivery.

“Currently, if you take an antibiotic for an infection in your leg, it diffuses throughout your entire body. To get enough of the antibiotic to your leg where it is needed, you have to take a higher dose. If we can control the directional movement of the drug, we can reduce the amount required and increase its speed of delivery,” said Ayusman Sen, the Verne M. Willaman Professor of Chemistry at Penn State and the leader of the research team.

Recommended for You: Top 10 Bioengineering Trends for 2020

“To effectively deliver drugs, you need the ability to carry the drug and to control movement precisely,” Sen said. “The interior of the protocells that we use can be filled with a payload, and we are now getting closer to finely controlling their movement.”


Physicists from McMaster University have recently developed a process to repurpose red blood cells as a drug delivery system. The modified red blood cells can be programmed to target diseases such as cancer or Alzheimer’s.

The team has developed a method that opens the red blood cell to modify the outer cell wall. The contents within the outer wall are replaced with a drug molecule. The new hybrid cell behaves like a normal red blood cell with an adhesive surface, which would then attach itself to the bacteria targeted.

“We have combined synthetic material with biological material and created a new structure, which has never been done before in this way,” said Sebastian Himbert, lead author and a graduate student in the Department of Physics & Astronomy at McMaster.

The team believes that this method of drug delivery could lower the dosage and lower the risk of unwanted side effects.


Scientists at Emory University have developed the fastest DNA nanomotor yet through a technique known as DNA origami. Their DNA motor is a rod-shaped cell that uses RNA, a nucleic acid with base pairs that are complementary to DNA base pairs, as fuel to roll continuously in a straight line to a targeted area. It does so without any human guidance or intervention and can reach speeds up to 100 nanometers per minute.

One of the problems with other DNA motor designs is that they have to navigate their way through a sea of other molecules that can cause the motors to drift. This phenomenon is known as Brownian motion. The viscosity of liquids can also impact the DNA motors, causing them not to travel at the desired speed or direction.

Prior DNA motors used a mechanical leg-over-leg motion, which was inherently unstable. Some of the motors would feature extra legs to gain control but sacrificed speed in the process. The team at Emory solved the problem by using a stacking method.

Sixteen strands of DNA are stacked in a four-by-four beam called the “chassis” of the DNA motor. The stacking creates a motor with four flat sides, and 36 bits of DNA protrude from each face of the rod. The RNA is laid on a track and binds with the bottom of the face of DNA chassis. An enzyme within the DNA targets the RNA and destroys it, propelling the beam forward to consume more of the RNA. The DNA motor can travel the length of a human stem cell within two to three hours.

The DNA origami takes advantage of the A, G, C, and T DNA bases. By rearranging the sequence of letters on the strands, the DNA strands bind together to create different shapes. This also allows the research team to determine the stiffness as another method of shaping the DNA motor. 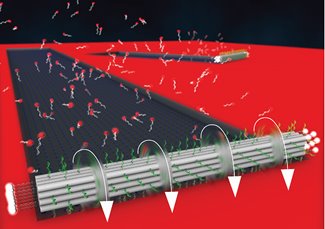 The DNA motor designed by Emory researchers is fueled by RNA binding with the bottom face of the chassis. The enzyme on the DNA destroys these RNA molecules (grey and red) and pulls the chassis forward. (Photo: Stephanie Jones, bio-illustrations.com)
“Nanoscale motors have tremendous potential for applications in biosensing, in building synthetic cells and also for molecular robotics. DNA origami allowed us to tinker with the structure of the motor and tease out the design parameters that control its properties,” said Khalid Salaita, a senior author of the paper and a professor of chemistry at Emory University. “We still have a long way to go to achieve the versatility and efficiency of nature’s biological motors. Ultimately, the goal is to make artificial motors that match the sophistication and functionality of proteins that move cargo around in cells and allow them to perform various functions.”

The potential uses of DNA motors include drug delivery in the form of nanocapsules that only open when they reach a target site.


A team of researchers at Washington State University and the Department of Energy’s Pacific Northwest National Laboratory (PNNL) have created nano-sized peptoids that can deliver drugs to target and destroy cancer cells. The peptoids are biologically inspired nanotubes and are rolled up from membrane-like nanosheets. Within each nanotube, there is a stack-up of drug molecules and cancer-targeting molecules, along with a layer of fluorescent dyes. This allows the team to track the efficiency of the drug delivery into the cancer cells.

The nanotubes allow for two types of drugs to be delivered directly into the cancer cells. The first drug is for chemotherapy treatments, and the second is for less-invasive photodynamic therapy treatment. The photodynamic therapy releases reactive oxygen species (ROS) that kill cancer cells when it is exposed to light. This approach allows doctors to lower the overall dosage of cancer drugs, leading to higher drug efficiency rates and lower toxicity rates to the patient.

“By using these peptoids, we were able to develop highly programmable nanotubes and a biocompatible delivery mechanism,” said Chun-Long Chen, a senior research scientist at PNNL and a joint faculty fellow at the University of Washington. “We also harnessed the high stability of  peptoid and its well-controlled packing to develop nanotubes that are highly stable.”

The research team tested the nanotubes on lung cancer cells and were able to deliver the chemo drug doxorubicin directly into the cancer cells, which were highly efficient in killing the cancer cells with a lower dosage. Because of their unique and intricate structure, peptoid nanotubes can be assembled easily and quickly while being able to stay in the body for an extended period of time to provide continuous treatment. 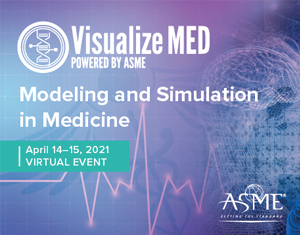