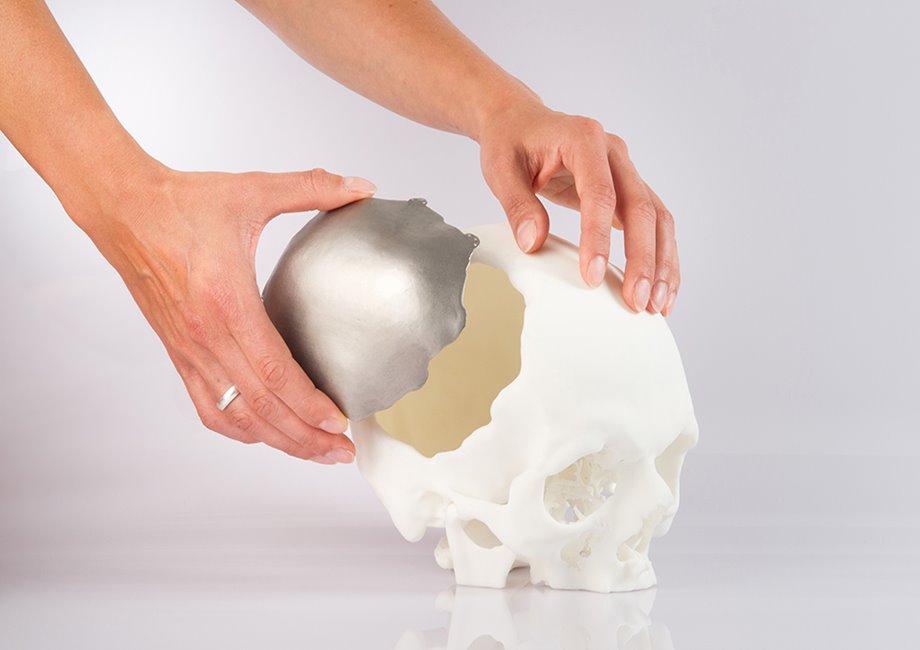 CEIT Biomedical Engineering uses a 3D printer to make a cranial model and the metal implant that will replace missing bone. Photo: Renishaw

When the 35-year old New Jersey resident Chris Cahill woke up from a two-months-long coma caused by a brain injury, he was in for some bad news. The infected frontal lobe of his skull had to be replaced.

Since skull implants are not off-the shelf products, his surgical team had to custom-make the part. Gaurav Gupta, an assistant professor of neurosurgery at Rutgers Robert Wood Johnson Medical School, turned to 3D printing. Using Cahill’s CT scans, Gupta 3D printed a model of Cahill’s skull—and a custom-fitted implant to replace the missing piece. Cahill was nervous about the surgery, but he woke up looking like his old self again.

3D printing works by slicing 3D CAD models into two-dimensional graphics files and building each layer, one at a time, until the final part is done. Since CT scans image objects one thin slice at a time, it was relatively straightforward to convert Cahill’s CT scans into instructions for a 3D printer.


In the medical industry the method offers great advantages over the conventional—or subtractive—device making, in which implants are often milled from bulk materials. As was the case for Cahill, 3D printing lets surgeons create custom-made parts to match a patient’s specific anatomy. It also enables engineers to build devices with very complex internal structures, such as devices that mimic intricate bone matrix.

Cranial, jawbone, and other anatomically sophisticated parts are good candidates for 3D printing. So are the knee implants—Stryker recently opened a $400-million factory in Ireland to manufacture them.

Recommended for You: Bone Repair with 3D Painted Ceramics

Yet, as a new industry, 3D printing faces intense scrutiny from the medical community and the U.S. Food and Drug Administration that must approve new applications of the technology. It is up to manufacturers to prove that their processes produce implants of consistent shape, strength and other characteristics. 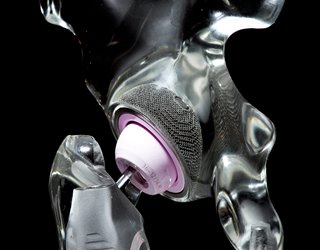 The world’s first 3D-printed hip cup has hexagonal cells so bone can grow into it and anchor it to the body. Ten years later, the implant is still functioning well. Photo: GE Additive
“The FDA doesn’t regulate 3D printing or printers,” said Jeph Ruppert, director at the customer innovation center at 3D Systems, which builds devices of complex shapes and geometries. Instead, the FDA evaluates the final device—the implant that in placed into the patient. If a hospital works with a 3D-printing company, the FDA requires the company to follow the agency’s guidelines, but does not regulate the hospital itself.

“So the onus on the manufacturer to verify that the material they created meets the implant-grade requirements,” Ruppert said.

The manufacturers also must assure that their devices are biocompatible with a human body—and that’s not a trivial thing, explained James McKinney, FDA’s press officer. “A device made of a material that may be acceptable for use within the brain could have different requirements than one that is intended for implantation in the stomach,” McKinney wrote in an email. “Therefore, it wouldn’t be appropriate to generalize an approach for 3D printing as biocompatible for all uses within the human body.”


So, what makes a material biocompatible? Timothy Wright, orthopedic surgeon at the Hospital of Special Surgery in New York City defines it as “the opposite of corrosion.”

“When you put an orthopedic device in the body, you must assure that it doesn't corrode, there is no oxygen degradation of the polymer or metal, or any other adverse effects,” Wright said.

For that reason, the traditional implant manufacturers have always used corrosion-resistant materials, such as titanium, stainless steel, and certain non-reactive polymers. These materials do not react chemically with the body.

Traditionally, these metal parts came from a foundry in a form of bars or castings, accompanied by a certificate of compliance. That certificate guaranteed certain standard characteristics required for the implant-grade metal. The implant manufacturer would then machine down the casting into the required implant shape, and it would retain the original qualities of the certified metal bar. 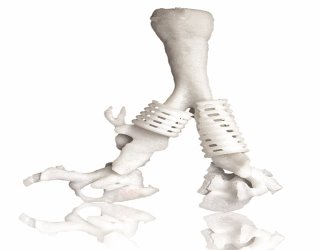 The 3D-printed clips surrounding this model of the trachea prevent the walls from collapsing and making it difficult to breathe. The clips could provide 5,000 babies with a gentler alternative to a tracheotomy and ventilator. Photo: EOS
In 3D printing, metal devices are forged from powder—whether metal or polymer. 3D Systems’ selective laser sintering uses a high-powered laser to fuse small powdered particles into three-dimensional parts. Unlike a bulk piece of metal, however, powders can pick up impurities or oxidize before use.

Over the years, however, regulatory agencies have amassed enough information about how these materials behave from the chemical or metallurgical perspective to feel confident, Wright said. As a result, most 3D printing manufacturers choose to use the exact same alloys—primarily titanium ones.

“The good news is that most 3D printers can produce implants from the same exact materials as the subtractive manufacturing,” he said. This means that many of the same standards still apply, regardless of whether devices are built by machining or 3D printing from powder. The fact that powders are prone to oxidization is less of a problem than it may seem.

“Most 3D printed implants are fabricated as a titanium alloy, and titanium loves to form a very adherent oxide,” Wright said. “So as you’re making the implant, it’s forming that oxidative coating on the surface.” This oxide acts a shell to coat against corrosion once the device is built.


While FDA’s Center for Devices and Radiological Health (CDRH) does not regulate materials or manufacturing processes, the agency is aware that medical device manufacturing—both conventional and 3D printed—can potentially introduce toxic materials into the body.

So the FDA guidelines outlined in the Technical Considerations for Additive Manufactured Medical Devices state that all materials used in the manufacturing process must be identified, including the source and purity of each. And because the starting materials may be melted and solidified multiple times during the printing process—which could introduce undesired chemical effects—manufacturers must outline all material chemistry changes that may happen during 3D printing. That will assure that the process doesn’t create any unintentional chemicals that could pose risk to patients’ health. 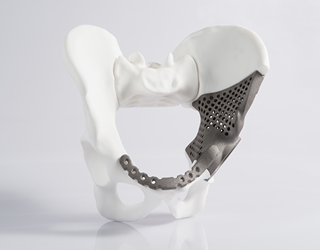 This titanium hip implant was made to give a young cancer patient greater freedom of movement. Photo: EOS
Furthermore, 3D printing can produce complex microstructures that may alter how the implant behaves. This may not affect biocompatibility, but may impact the fatigue strength, so the manufacturers must test their builds for the stressors they will endure.

John Bohenick at Osseus, a company that 3D prints spinal implants, said that with every implant build, the company simultaneously 3D prints test coins from the same powder mix. They then subject the coins, also called test coupons, to the same stressors that the implant devices will withstand to verify the material’s integrity.

“The idea is to make sure each of the implants meets or exceeds its strength requirements,” Bohenick said. “But, because we have already gone through the mechanical testing of the implants with the FDA, we use coins to validate that the integrity of each build.”


What Are Test Coupons?


The FDA acknowledges that using test coupons is particularly important in additive manufacturing. According to the agency’s guidelines, a test coupon is a representative sample of the device or component.

“When coupons are used, they should be validated to accurately and reproducibly represent the one or more printed parts within a specific build volume,” the document says.

The guidelines also specify where on the build plate the test coupons should be placed to adequately represent the build. If the device is made from an absorbable material intended to biodegrade in the body, the coupon can be used to test the degradation in a petri dish, which simulates conditions in the body.

One big advantage offered by 3D-printed devices is their ability to form complex shapes and geometries, including honeycomb structures, channels and cavities. Biomedical engineers, for example, can give orthopedic devices porous surfaces that encourage the bones to grow in and around them, strengthening the overall structure. That advantage comes with a price, such as cleaning away residual titanium powder that may get stuck in their miniature pores.

The finishing touch, done via blasting or ultrasonic cleaning, is a part of the standard procedure in additive manufacturing. Blasting involves blowing pressurized air full of small particles, such as baking soda, to make sure no residue is left inside implant pores. Ultrasonic cleaning agitates fluids that run through the implant, achieving a similar cleaning effect.

“Ultrasonic cleaning and blasting assures that you don’t have any spare titanium power left, because it’s toxic,” Ruppert said.

While the industry is still figuring out the standardization quirks, the 3D printing of medical devices is rapidly expanding, thanks to its great promise. New York City’s Hospital for Special Surgery is setting up a 3D printing facility on site, collaborating with LimaCorporate, a medical device company based in Italy.

The goal is to quickly fabricate custom-designed implants for patients with special cases and conditions, with bones destroyed or misshapen—such as hip dysplasia, in which a hip joint doesn’t fit its pocket and must be replaced. Because the unit will produce customized implants, FDA allows it to use a streamlined conformity assessment protocol.

“We are slated to open in July or August and we hoping to start printing then,” Wright said.

Lina Zeldovich is a science and technology writer based in New York City.