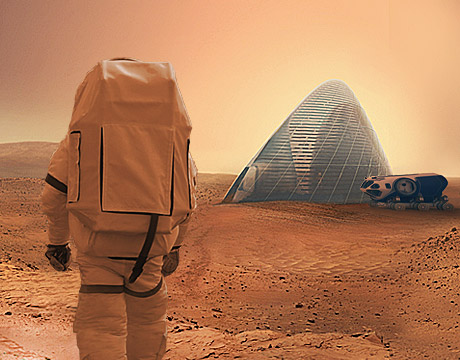 In The Martian, when astronauts blast off from the Red Planet, they leave behind botanist, engineer Mark Watney (Matt Damon), presumed dead after an intense dust storm. With only limited supplies, Watney must somehow sustain on the hostile planet, until a rescue mission tries to reach him two years later. Now if only Watney had access to the designs submitted for the 3D Printed Habitat Challenge Competition, the task could have been less daunting.

The competition, launched in May 2015 by NASA and America Makes – National Additive Manufacturing Innovation Institute, fosters the development of new technologies to additively manufacture a habitat using local indigenous materials in space and on Earth. The design competition was the first phase that challenged participants to imagine what habitats on Mars might look like using 3D printing and in-situ resources.

“It was a big enough goal to make people stretch their minds to think about the constraints of Mars and how additive could be used to their advantage,” says John Wilczynski, deputy director of technology development at America Makes.

From an elementary school to professional design firms, participants from across the world submitted their innovative concepts and designs to build habitats on Mars for astronauts. More than 160 submissions were received and the 30 highest-scoring entries were judged at the New York Maker Faire, held on September 27. “Teams were judged on many factors, including the design approach, habitability, functionality, and 3D print constructability,” says Wilczynski.

NASA awarded a total of $50,000 to the winners. The first-place award of $25,000 went to Team Space Exploration Architecture and Clouds Architecture Office. Team Gamma bagged the second place award and $15,000. Team LavaHive walked away with the third prize of $10,000. Besides the three winners, there were a few honorary mentions and awards for “Best in Class” categories as well.

A House of Ice

Created by a team of eight designers with consultation by space-related experts comprising scientists, astrophysicists, geologists, and 3D printing engineers, the winning design of the ICE HOUSE extends NASA’s “follow the water” approach to construction. Given the predicted abundance of water in certain areas on Mars, their approach takes full advantage of water’s properties as an indigenous material and persistently low temperatures in Mars’ northern latitudes to create a multi-layered pressurized radiation shell of ice that encloses a lander habitat and gardens within.

The second-place winning team Gamma’s design uses a semi-autonomous multi-robot regolith (Martian soil) additive manufacturing system to create a protective shield around a modular inflatable habitat. The proposal primarily explores system and design redundancy through distributed functionality: from the initial descent and navigation of the three inflatable modules to find a suitable location; with the flexible and interchangeable internal habitat design; through to the multi-robot microwave regolith melting.

A modular Martian habitat design created by team LavaHive that won the third place incorporates recycled spacecraft components as a key element of the habitat concept. The back shell of the entry, descent, and landing system that will deliver the construction rovers is the primary habitat roof, with an inflatable module underneath as the primary living habitat. Using the readily available Martian regolith, two rovers use a combination of sintering and lava-casting to build connecting corridors and sub-habitats around the main inflatable section.

Submitted by a team of multidisciplinary group of experts in architecture, digital fabrication, computation, material science, additive manufacturing, robotics, mechanical and aerospace engineering, the Hybrid Composites design was a runner-up entry. It proposes a hybrid approach that integrates multiple robotically controlled fabrication techniques using fibers and polymers. The habitat is a combination of a 3D printed composite lattice that is extruded through robotic arms, serving as structure, and an inner layer of robotically formed composite shells as enclosures.

CTLGroupMars’ submission to the 3D-printed habitat challenge, the Seed Habitat, won the “Best Use of Space” award. Their design was inspired by ancient Roman concrete designs that did not include reinforcing steel. The feedstock for Martian concrete is gypsum sand available on the Martian surface. Thermal dehydration converts the gypsum to plaster and water, two of the three ingredients necessary for concrete. A concrete 3D printer tunes the proportion of those materials, along with Martian sand and/or stone, to produce mix designs.

The “Best Technical Proposal” award went to team A.R.C.H’s submission that uses the design and construction methodology of basalt fiber clay matrix structures for in-situ habitat construction on Mars. The basalt fiber reinforced clay is produced from soils and rocks found on most terrestrial bodies including the Earth, the Moon, and Mars. The technique updates the proven technology of “Cobb” construction; replacing straw with basalt fibers, using additive manufacturing to produce efficient, complete, and habitable structures.

Wilczynski believes there is an immediate humanitarian application of this challenge to solve the need for safe and sustainable housing on earth. “In many cases where we have seen devastation, the locally available raw materials can be used additively to create shelters. The teams are understanding there is an opportunity here on Earth than Mars for immediate applications.” Meanwhile, he adds, America Makes is actively working with NASA to put together a plan for the next phase of this challenge.

Learn more about the issues and challenges associated with 3D printing at AM3D.

For Further Discussion
It was a big enough goal to make people stretch their minds to think about the constraints of Mars and how additive could be used to their advantage.John Wilczynski, America Makes