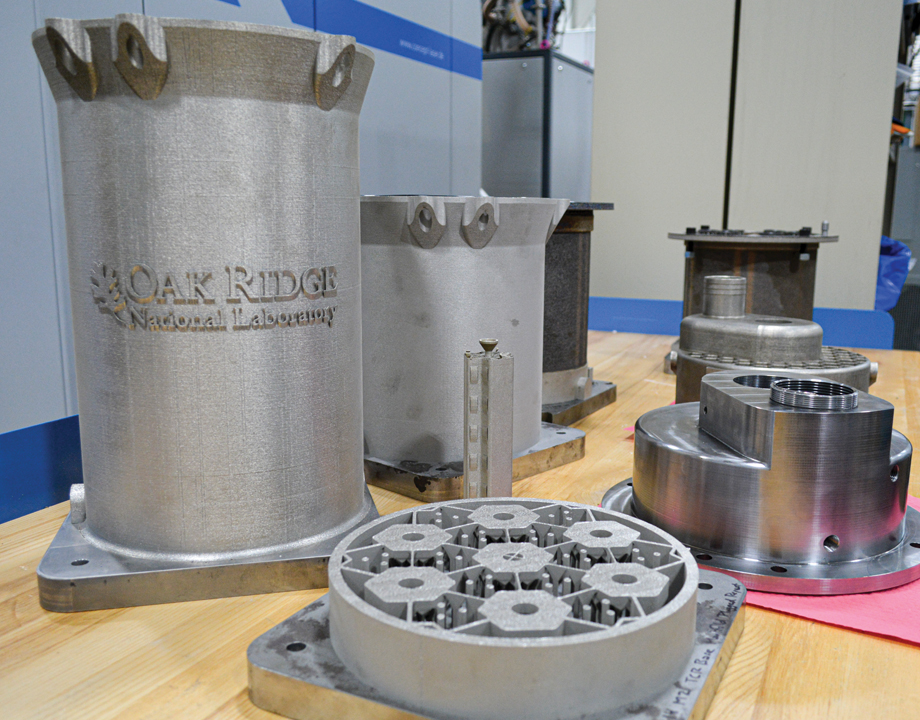 Advanced Manufacturing Building Equipment Contractors Electric Power Primary Metal Manufacturing
The design and materials of nuclear reactors haven’t changed much since the 1950s. Never mind that we have seen only a few new ones in recent decades. The newest designs most likely to be approved do not deviate greatly from what came a half-century before.

“Nuclear is a little bit of an outlier, in the sense that this community hasn’t capitalized on advanced technologies and advanced materials that much,” said Kurt Terrani, a senior staff scientist at Oak Ridge National Laboratory. “It’s either the nuclear people are so good that they got everything right and they are just perfect—there’s no room for improvement and we don’t need any advances—or they are not taking advantage of advanced technologies.”

Terrani and his colleagues have decided to take advantage of those advances themselves. To that purpose, they are creating the world’s first 3D-printed nuclear reactor core.

The core is part of the Transformational Challenge Reactor program that started at the lab in 2019. They were frustrated by the cost and time it takes to build a reactor. They wanted to do things in a radically different way.

The world’s first continuously operating reactor, X-10 Graphite Reactor, was speedily erected in 1943. “Our lab director was like, ‘Those guys that built the first one ever, built it in nine months. How fast can you guys do it?’ That’s how it started,” Terrani said.


The system they started designing is a 3-MW gas-cooled microreactor. The architecture, materials, sensors, and artificial intelligence used in the reactor are all revolutionary compared to what’s come before. “What really stands out and touches everything is the 3D printing,” Terrani said, “That’s the key enabler.”

The rods, plates, and pebbles of previous designs are out. Instead there are complex geometries, channels, and surfaces that enhance heat transfer. High- and low-power regions can have different amounts of fuel and separate cooling channels. The core is made of silicon carbide, a material that, due to its extreme hardness, was costly to machine. But recent advances in additive technologies have allowed the ceramic to be 3D printed.

You May Also Like: 3D Printing Overcoming Biocompatibility Challenge

By building the reactor layer by layer, sensors can be embedded throughout. “Now I can get distributed information in critical places,” Terrani said. “I can look for strains, see if there is a crack that is propagating.”

The addition of sensors will allow a nuclear plant to run far more efficiently. Instead of requiring hundreds of employees, only a handful will be needed.


As they’ve been prototyping components, they have collected an enormous amount of data. They’ve been using it to create the best components as well as the standards by which such a component should be gauged.

“We’re engaging the Nuclear Regulatory Commission,” Terrani said. “They are very open-minded, but you have to show them data.”

Learn More: How to Achieve Government Approval for Additive Manufacturing

But more than the specifics of the technologies being used, Terrani and his team want to prove that quick, inexpensive prototyping of new reactors can lead to real results. “It’s a balance of showing the art of the possible but at the same time keeping our eye on the ball,” he said. “Instead of doing six months of design and then seeing if it works, we do two days or two weeks of design and then go make it. We don’t want to be another paper reactor—they run beautifully in a computer but then never get built. We want to build something.”