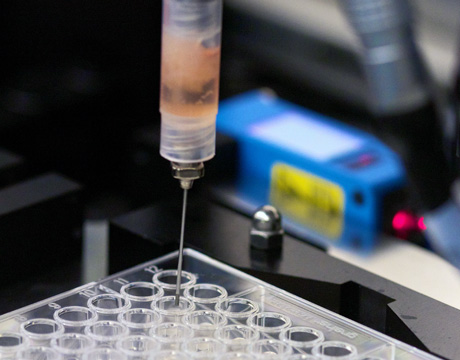 When American engineer Charles Hull invented the first 3D printer over 30 years ago to create concept models, would he have imagined that someday researchers will use 3D printing for constructing organ scaffolds that are way more complex?

Continued innovation has pushed 3D printing into new realms and has proved how far the technology has come since its invention. From dental products to prosthetics and tissue engineering, 3D printing is also helping address some of today’s biomedical challenges.

“Biomedical applications are ideally suited because they are built on this uniqueness of additive manufacturing, which is the ability to make optimized and customized parts that are very complex,” says Hod Lipson, associate professor of mechanical and aerospace engineering and computing and information science at Cornell University and co-author of the book Fabricated: The New World of 3D Printing.

A recent study by Meticulous Research indicates that the global medical 3D printing market is expected to reach $983.2 million by the year 2020, with major drivers being the widening application, government initiatives to promote research activities in 3D printing, and increased investments. So what will be the next stage of innovation?

Bioprinting is an emerging technology for fabricating artificial tissue and organ constructs. Extensive research is being conducted in bioprinting and its potential as a future source for organ transplants. It is, however, much simpler to print in plastic than living cells.

“The human liver tissue that we just released could be used for toxicology testing, metabolic testing, and drug-drug interactions,” says Michael Renard, executive vice president of commercial operations at Organovo. “Besides being a functional tissue in shape and size, one of the characteristic is that the tissue lasts for a number of days and weeks. It affords the ability for drug scientists to do longer duration tests,” he adds.

In addition to drug discovery testing, says Renard, “We also have a group that’s beginning to work with tissue designs that could be valuable in the clinic as a therapy to be delivered to patients for a specific unmet medical need.” According to him, “The goal is to continue to advance tissues of higher complexity and closer to the kind of tissues and organs that we see fully formed in people.”

Ibrahim T. Ozbolat, assistant professor at the University of Iowa’s Mechanical and Industrial Engineering Department also has been using a 3D printer to print living structures with bio-ink (watch video). The goal is to eventually print a working organ that can be transplanted into a human.

A 3D printed ear, heart valve, and kidney are other organs researchers are currently working on but it’s hard to match the complexities of real-life human organs. The next stage of innovation in bioprinting, says Lipson, will be in multiple heterogeneous tissue to get closer to printing an actual organ. “There are a couple of ideas that have been demonstrated related to vascularity that are promising. The question is how big of a tissue can you keep alive using these approaches and that’s yet to be demonstrated,” he adds.

The Case of Cartilage

In 2006, Prof. Lipson and his colleagues at Cornell’s Creative Machines Lab printed a meniscus, the C-shaped piece of human cartilage that cushions the knee and other joints and researchers around the globe are now using 3D printing technology to print living cartilage for patients with knee injuries.

More recently, a biomedical engineer and trachea specialist from the University of Michigan were able to create a 3D printed splint that saved a baby’s life who was born with a rare breathing disorder and researchers at the Feinstein Institute for Medical Research also successfully engineered a 3D printed cartilage to repair tissue damage in the trachea.

Although further research is required before 3D printed cartilage is actually used in patients with bone injuries, the technology holds immense promise for orthopedic surgery.

Prosthetics was one of the first biomedical areas to be revolutionized by 3D printing and continues to grow as the technology becomes more democratized, making replacing limbs easier and cheaper.

Not long ago, ASME.org featured the RoboHand, a device fabricated on a 3D printer, developed by a South African carpenter Richard Van As and Ivan Owen from Bellevue, WA. Now with easily accessible open source designs, people are 3D printing custom prosthetics for children, adults, and even dogs like Derby, who was recently seen at the 2015 White House Science Fair.

“The impact of 3D printed prosthetics on the developing world is immeasurable,” says Elliot Kotek, co-founder of the non-profit organization Not Impossible, LLC, which uses 3D printing for building low-cost prosthetics for populations with no access to an alternative.

“3D printed options are providing tools for those who’ve previously lacked access to workable, affordable, timely solutions,” says Kotek, adding that “The 3D printed mechanical hands and arms are not, of course, anywhere near the standards of bionics being offered in higher socio-economic environs, but in places where lives are on the line, daily, having rapid prototyping options is a game changer.”

Learn more about the latest technologies in 3D printing at ASME’s AM3D 2015 in India and Boston.

Unlike traditional 3D printing of plastics and metal where after you finish printing you have your part, with bioprinting it’s just the beginning.Prof. Hod Lipson, Cornell University