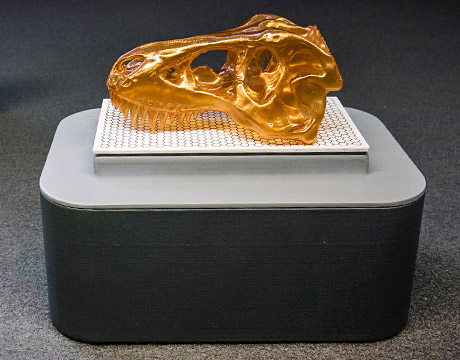 3D printing has blossomed in the past few years, expanding exponentially in the worlds of manufacturing, prototyping, and amateur doodadding. But however steep its rise in popularity, it can’t really be said to have conquered our markets and our minds until it’s as ubiquitous as the cell phone.

Now, a new printer is making great strides in that direction. Not only is the Olo only marginally larger than a cell phone, it uses a cell phone as the chief engine. Soon we may be able to spit out a trinket as easily as we text.

“The idea came to us about a year and a half ago—it was a night inspiration,” says designer, entrepreneur, and Olo co-founder Filippo Moroni. After a few months of research, “We discovered it was not even patented. It was just the right idea at the right time.”

Smartphones cast an even light from their screens and, more to the point perhaps, most people have one. The only major difficulty to overcome in making the printer a reality was that cell phone light falls in the visible spectrum. The Oloists needed to come up with a resin that would react with the standard glow—or they had to team up with an industry giant that could. “We worked with a company, [we] can’t say which because of the contract, but it’s a big company that’s worked in this field for eight years, a multinational company,” says Moroni.

The new material they developed, which they call Daylight Resins, are put in a well below the area where the cell phone rests. The whole operation takes place in a sealed container, preventing outside, non-touchscreen light from leaking in. Then, using a technique not unlike other digital light processing printers, the 3D object rises from the resin well.

More remarkable than the size and technique is the price. Pony up on Kickstarter and you can have one for $100. And the marvels don’t stop there, as the other Olo co-founder, Giacomo Fornasini (currently a student of mechanical and industrial engineering at the University of Maryland) points out. “Listen to me, Olo is the lightest 3D printer ever made, just a bit more than one pound. It’s the only battery-powered 3D printer in the world. It’s made of seven plastic pieces and one chip,” he says. “Olo can reach a resolution of 42 microns, so at $99, it’s just seven microns away form a $47,000 printer. The printer is totally self sufficient and it’s the quietest 3D printer in the world. It’s a huge innovation altogether.”

The printer is totally self sufficient and it’s the quietest 3D printer in the world. It’s a huge innovation altogether.
Giacomo Fornasini, co-founder, Olo

Those who might need to replace a lost chess piece on the go, or pop out some plastic jewelry for a gift on the way to a birthday party they’d forgotten to shop for, will have a choice of five different colors with a range of different strengths. Unlike other low-end printers that might rope you in with a low initial outlay but get you with the cost of the filament, a bottle of Daylight Resin will likely cost $15.

Needless to say, that jewelry, or chess piece, can be designed on the phone in a dedicated app, making the whole system self contained and independent of other technology. Due to the difficulty in getting the software, the resin, and the phone to talk to each other, the program is not open source.

Anyone eager to start 3D printing on the fly could have an Olo in hand as early as August of this year. And not too long after that, Fornasini and Moroni hope to release a version for tablets, called the Olo Pro.