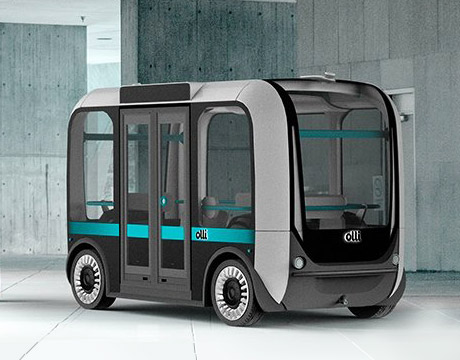 People in National Harbor, MD, were given a treat when a self-driving minibus was offering rides. It’s unusual enough to see a bus without a driver, but then this one also involves a significant number of 3D printed parts.

The minibus has been designed by the Phoenix-based startup Local Motors, known for its 3D printed Strati. “We remain committed as a company to pursuing solving people’s transportation problems and making a difference in the world through hardware, so one of the themes we’re very focused on is trying to address the issue of mobility in an urban environment,” says Alex Fiechter, head of product development at Local Motors.

The Local Motors team launched a co-created challenge, says Fiechter. The public was let in on the conversation, and everything up to and including a bike-sharing system was considered. But, ultimately, a minibus, named Olli, was selected.

Since the company’s philosophy includes micro-manufacturing, focusing on a niche with low- to mid-count runs of vehicles, Olli would appear to fit right in.

The 3D printed parts for the minibus, which was created to carry about 12 people, included “below the belt line,” small-scale structural components and more. For example, one 3D printed part functions not just as aesthetic trim around the wheel wells, but also as a weather barrier for the inside of the vehicle, similar to a liner. “[The liner] is structural and holds panels of exterior glass on the lower side and mount for some of the components in the system,” he says.

The smaller components include some of the mounting points,interface points between the internal structure and the outer body.

Using 3D printing they built a mount for holding sensors for functions such as lidar and radar. “We have sensors on one hand used for localization, the other is for obstacle protection,” Fiechter explains.

Running on electric power, Olli has advantages for noise and being more environment-friendly. With the thought of sometimes being used for 24 hours a day down the road, it can switch to a power storage methodology. It’s capable of going faster but it’s eyed for traveling on average at roughly 20 miles per hour.

That’s part of the reason why National Harbor was seen as a good setting for a trial, says Fiechter.Toughparking combined with a planned casino nearby was the environmentthey thought could benefit from this type of vehicle.The reaction, he says, was positive, with people finding it a friendly means of transportation.

But with only two Ollis currently in existence, it means the one used at National Harbor can’t constantly be in use, as improvements continue to be made. Among these are creating interactive components inside the vehicle. The hope is to make the experience as fun in the journey as in reaching the destination.

For Further Discussion
We remain committed as a company to really trying to pursue solving people’s transportation problems and making a difference in the world through hardware.Alex Fiechter, Local Motors