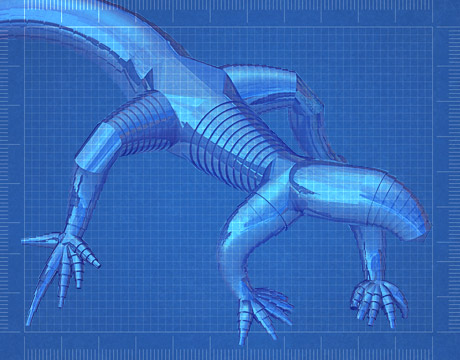 Researchers have found a way to design telescoping robots that can collapse themselves for transport or entering tiny spaces. Image: Carnegie Mellon

3D Design with a Twist

Imagine a little robotic dinosaur that shrinks down small enough to fit through a gap at the bottom of a wall and then redeploys at full scale on the other side. Or, perhaps a curved claw that stretches out over a mound of rubble to save a teddy bear trapped in a fire.

Those are just some of the many possibilities for a new way of making collapsible devices based on curved telescoping parts. Think of them as the unexpected progeny of a pirate’s telescope and Marvel superhero Wolverine’s retractable claws.

“Telescope” entered the English language around 1650 as a noun to describe an optical instrument that magnifies distant objects. Once sailors began using easily stored telescopes, the noun became a verb to describe the linear extension of any set of nested cylinders into a longer object. Today, telescoping parts are used in everything from camera tripods and antennas to baskets, and, of course, telescopes. Seeing Wolverine’s retractable claws at a Maker Faire inspired Keenan Crane and Stelian Coros to put a new twist on telescoping parts.

The two are assistant professors of computer science and members of the Robotics Institute of Carnegie Mellon University. After seeing the claws retract, they began to wonder how many different types of objects they could make by using curved parts that bend and rotate as they telescope.

“It was an interesting moment for us,” Crane says. “The artist had figured out one way to do it, but we wanted to know all the possible ways you could possibly hope to do it.”

The answer, it turns out, is a lot. “Any space curve of constant curvature can be a telescope,” Crane says. Working with Christopher Yu, a doctoral candidate, Crane and Coros developed a way to automate the design of telescoping structures.

Their mathematical model for telescoping structures started with a few assumptions: Each shell must be manufacturable from rigid material such as metal; it should extend and contract without bumping into itself; and there should be no empty or wasted space between nested pieces.

Their work on the model led to a key geometric insight. Both simple pirate telescopes and the most complicated telescoping objects can be defined by simple geometric curves that exhibit a constant amount of bend and one or more arbitrary twists.

Crane likens that to a clump of instant ramen. All the noodles curl and bend by roughly the same amount, but they all twist in lots of different ways. This accounts for their bountiful variety of shapes.

They tested the model by simulating a metal salamander-like lizard that collapses into a package that looks something like a complex gear box. Other simulations included the shrinking dinosaur and teddy-bear-saving claw.

They also prototyped several structures using a 3-D printer, including a flexible robotic arm and a hard-surfaced tent that expands to several times its original volume. Telescoping structures also expand the production capacity of 3-D printers. “You can print a much bigger structure than your normal 3-D printer would allow, because when you take it out, it deploys to a greater volume,” Crane says.

With so many possibilities, Crane and Coros are looking for collaborators with ideas about how to control these devices. Because, thanks to their simulations, it does not take a telescope to see that potential applications are closer than ever.

For Further Discussion
The artist had figured out one way to do it, but we wanted to know all the possible ways you could possibly hope to do it.Prof. Keenan Crane, Carnegie Mellon University