Ohio University’s pedal-powered Peregrine, designed and built by engineering students, competed against 32 other college teams in a series of rigorous speed and endurance challenges on a course laid out on the campus of Tennessee Technological University.  After ASME judges tabulated the results, Ohio University came away with a total of four awards, including best design, second place in the endurance event, and third place in both the women’s speed event and in the category for innovation. 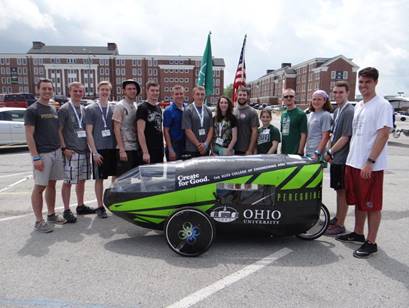 “The HPVC program provides an opportunity for engineering students to apply engineering principles in the development of fast and efficient transportation systems,” said K. Keith Roe, president of ASME.  “ASME congratulates all contestants.” The competition was held in conjunction with E-Fest East, which ASME organized with sponsorship support from Siemens PLM.

Tennessee Technological University was the proud host of E-Fest East, a multi-day event that allowed engineering students to showcase their technical skills while connecting them to thought leaders and practicing engineers for career advice and guidance.