Aug. 10, 2018 – An early device that brought mechanization and speed to fabric tufting and spurred the growth of carpet manufacturing in Georgia was recently designated as an ASME Historic Mechanical Engineering Landmark. The designation ceremony took place on July 31 at Shaw Industries in Dalton, Ga. 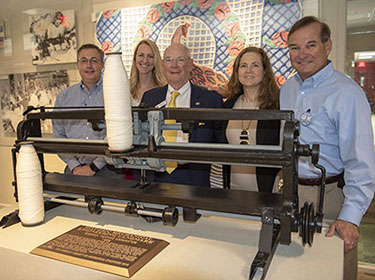 The original Moench tufting apparatus, which was named after its inventor Ernest J. Moench and patented in 1928, featured a durable needle that punched loops of thick fabric through a web of backing material, resulting in the reliable, high-speed tufting of carpet without human intervention. Descendants of the apparatus, which was named ASME’s 266th landmark during the ceremony, are currently used to fabricate more than three-quarters of the carpets produced in the United States. 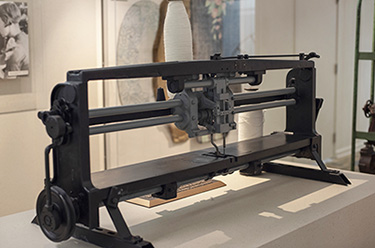 The Moench tufting apparatus, the device that brought mechanization and speed to carpet tufting, was designated as the 266th ASME Historic Mechanical Engineering Landmark last month in a ceremony in Dalton, Ga. (Photo by Wil Haywood, ASME Public Information)
“The Moench tufting apparatus played a role in the growth of the textile industry in the state of Georgia,” said ASME Past President Reginald Vachon, who spoke at the designation ceremony. “The device is a significant piece of the industrial heritage of America’s south and worthy to receive landmark status.”

For more information on the ASME History and Heritage Landmarks Program, visit www.asme.org/about-asme/engineering-history/landmarks/about-the-landmarks-program.