Inside the ascent module
The Apollo lunar module (LM-13) was developed by the Grumman Aircraft Engineering Corp. (now Northrop Grumman). The LM's main functions were to carry two astronauts from lunar orbit to the moon's surface, and then return them to lunar orbit to rendezvous and dock with the Apollo command-service modules. On the surface, the LM served as a shelter and base of operations as the astronauts carried out their exploration and experiments. On July 20, 1969, the LM "Eagle" touched down on the moon, becoming the first piloted spacecraft to land on a celestial body other than Earth. Five more landings followed. This vehicle, LM-13, was scheduled to fly as Apollo 18, and is representative of the lunar modules that traveled to the moon.

Two other unfired modules already are preserved in museum settings (No. 2 is at the Smithsonian Institution, and No. 15 is at Kennedy Space Center), but this one, No. 13, is made special by being near its birthplace at Northrop Grumman. Grumman's facility in Bethpage, New York, designed and produced the lunar modules, which would orbit the moon, attached to command and service modules.

The LM's module design was economical because each could be designed for specialized functions of exploration and re-entry operations. Thomas J. Kelley, who served as the engineering manager and eventually deputy program manager for the lunar module program, has recalled in the past, "We didn't know anything about space anymore than most people did at that time. But we did know a lot about producing reliable flying machines." Kelley's mechanical engineering and propulsion concepts and designs helped shape the plans for the Apollo missions.

Thirteen lunar modules were built and six landed on the moon. No. 13, which was to have flown on the canceled Apollo 18 flight, is on permanent loan from the Smithsonian Institution to the Cradle of Aviation Museum.

The last Apollo flight took place in December 1972, with Apollo 17. The Lunar Module is one of three components making up the Apollo spacecraft. The story of the Apollo program is told in other ASME landmarks as well. An Apollo command module, built by Rockwell and which flew as Apollo 14 in 1971, was designated an ASME landmark in 1992. The Saturn V rockets that launched the Apollo crafts were designated in 1980, at space centers in Alabama, Florida, and Texas. 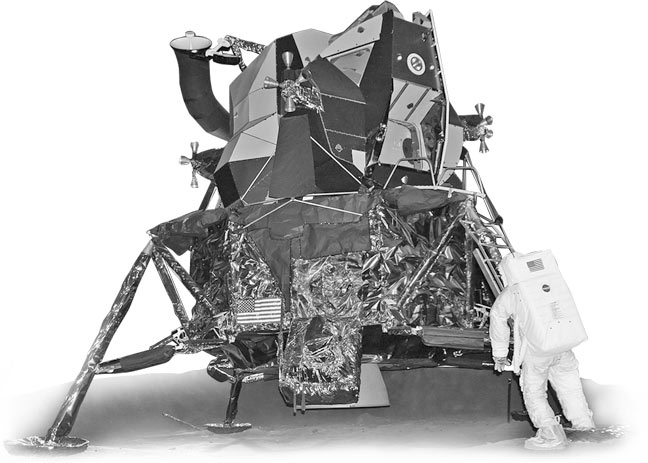 Situated in the Cradle of Aviation setting that replicates the Eagle's moon landing, the LM-13 is one of three surviving earth-bound lunar modules. photo: Daniel Berek