Only known example of a Barker hydraulic turbine, the earliest practical reaction type

This is the only known example of a Barker turbine, the earliest practical reaction turbine design. Water jetting from nozzles at the ends of the arms cause the arm-and-shaft assembly to rotate. The brass nozzles were adjusted to balance the water flow to each side. The turbine was built by the West Point Foundry in Cold Spring, N.Y. It can produce about 6 hp at 22 rpm.

Barker's turbine was invented as a laboratory curiosity at the end of the 17th century. It was later improved upon, leading to the Scotch turbines widely used throughout Europe and America. The discovery of this pre- Scotch turbine in Ponce led historians on a decade-long search for its origins. The turbine follows improvements made by James Whitelaw in 1841 England and 1843 America, often treated as the first true metal turbine waterwheel. This turbine, then, is considered a "missing link" in the evolution of turbines.

Owned by the Puerto Rico Conservation Trust, the mill has been documented by the Historic American Engineering Record (HAER). 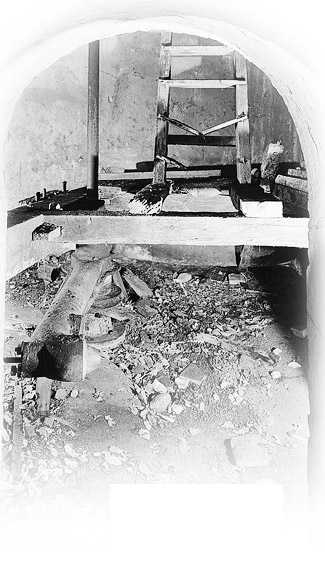