Last remaining dredge in the United States with unique propulsion system, designed for a wetlands environment

Built by the Bay City Dredge Works of Bay City, Michigan, this dredge was used to construct a portion of US 41 called the Tamiami Trail, which connected Tampa with Miami through the Everglades and Big Cypress Swamp. The last remaining display of walking dredges (of some 145 walking machines), it has a unique propulsion design enabling the dredge to cope with drainage problems in a wetlands environment.

It was a piece of specialized equipment that dug a canal which provided rock fill for roadbed drainage of the completed road. Running on a 50 hp Charter internal combustion engine, the dredge moved over rough, swampy and slippery ground and through close-cut stumps, where other earth excavators had difficulty. The walking mechanism was patented by Vincent G. Anderson, Thief River Falls, Minn., on July 2, 1918 (#1,270,763).

The first walker, according to John Thompson, Michigan Historical Review, Fall 1986, is attributed to Albert N. Cross of Grand Rapids, Wis., in 1902. This was modified by Carl F. Wilson at Bay City in 1916 in a form similar to Anderson's patent. The 1916 walker consisted of identical pairs of 30-foot bridge frames and weight-supporting runners along each side of the dredge. The bridge frame was eased forward along the ground with the weight of the frames moving from the corner runners to intermediary runners, using hoists and the motion of the bucket, until the corner pads could be repositioned. Once relieved of its load, the intermediary runners would be drawn forward and repositioned for another step. Each step could cover 5 to 8 feet, in 30 seconds. The machine could be turned and backed. It required one operator and helper, which was one less than dredges on portable tracks.

The dredges would follow the drilling rig, which bored holes into the limestone. The holes were filled with Cypress posts and dynamite, which were then detonated electrically. One construction worker recalled huge boulders being thrown 50 feet in air.

Dredge No. 489 was shipped May 8, 1924, to W.R. Wallace & Co., road subcontractors, Fort Meyers, Fla. In 1927 to 1928, it dug a 10-mile section of the Trail between Black Water River to Belle Meade Crossing (where US 41 and 951 intersect). The Tamiami Trail was the first established route opening southwest Florida to travel. 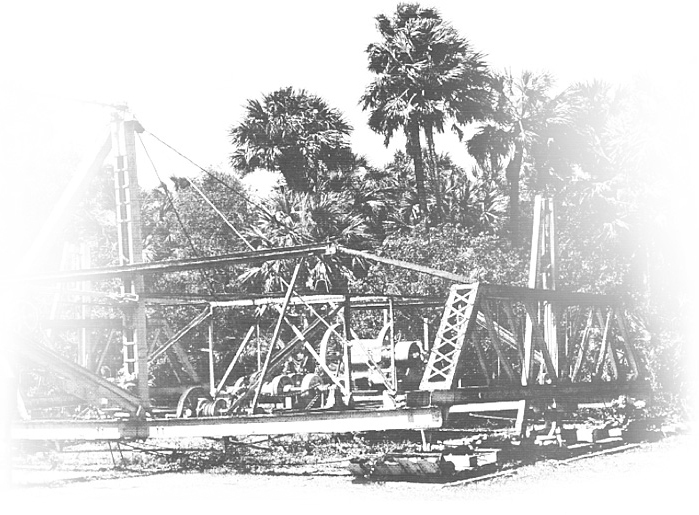 Follow U.S. 41 east past Collier Boulevard. Park will be 8 miles on the right just past County Road 92. Dredge stands near entrance.