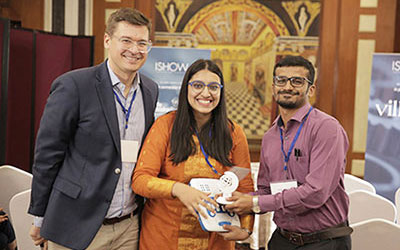 Paul Scott (left), director of ASME’s Engineering for Global Development department, presents the ISHOW grand prize trophy to Sanskriti Dawle and Saif Shaikh of Team Annie.
The inventors of a device for learning Braille, a medical screening monitor for diabetes patients, and a wearable device that records and relays infant diagnostic information were selected as the grand-prize winning entries at the 2018 ASME Innovation Showcase (ISHOW) in India earlier this month. Eight teams of socially conscious inventors and entrepreneurs participated in the event, which took place April 5 at Le Méridien Bangalore in Bangalore, India.

The three winning teams at ISHOW India will share $500,000 in cash and in-kind prizes with the winners of ISHOW Kenya and ISHOW USA, which will take place in May and June, respectively. The winners were chosen by a panel of experts from the social engineering space based on criteria that included knowledge of the customer or user; hardware validation and development; manufacturing optimization; and the team’s strategy for implementation. 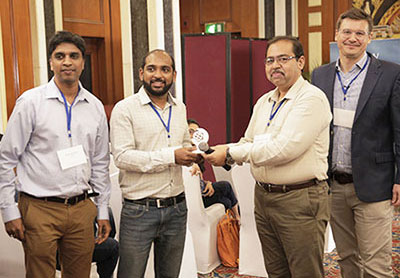 (Left to right) Ram Mohan and Vinayak Nandalike of Team Sparsh accept the 3D-printed grand prize trophy from Madhukar Sharma and Paul Scott of ASME.
Sanskriti Dawle and Saif Shaikh of Thinkerbell Labs were recognized as one of the event’s winning teams for creating Annie, a low-cost, audio-tactile device that enables the visually impaired to teach themselves Braille. The apparatus, which can also be used by an instructor to teach Braille in a classroom, features a refreshable braille display, a digital braille slate, and nine-key, Perkins-style braille keyboard.

Vinayak Nandalike and Ram Mohan of Yostra Labs were also honored with the competition’s grand prize for their entry, Sparsh, a multi-parameter, portable and inexpensive hand-held medical tool that enables medical care providers in developing communities to examine diabetic patients for symptoms of peripheral neuropathy — permanent nerve damage to the foot that is often caused by the disease. 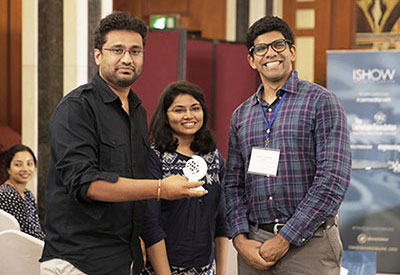 “The extraordinary inventions put forward by Annie by Thinkerbell Labs, Brün CG and Sparsh will make it possible for doctors and teachers to do more to help their patients and students, respectively, live better, more fulfilling lives,” noted Charla K. Wise, president of ASME. “Their display of creativity and ingenuity, and that of their peers, fully embodies the spirit of the ISHOW and exemplifies the potential of tomorrow’s engineering problem-solvers and social entrepreneurs.” 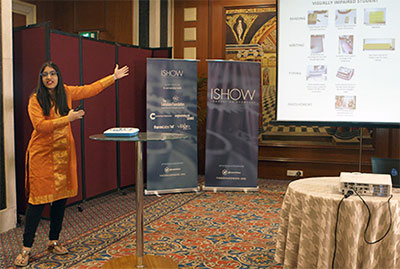 Sanskriti Dawle of Team Annie describes her team’s entry during her presentation at the ASME ISHOW in India. Their invention, Annie, is an affordable, device for teaching Braille to the visually impaired.
The eight finalists at ISHOW India were judged and advised by a panel that included Satish Gokhale of Design Directions, Ritu Verma of Ankur Capital, Deepak Raj K of Osteo3d, Ratul Narain of Bempu Health, Sandhya Kedlaya of Henkel, Arun Venkatesan of the Villgro Innovation Foundation, Guruprasad Rao from Imaginarium India, and Vivas Kumar of Tesla Motors.

Another group of eight teams will face off at the next event, ISHOW Kenya, to be held in Nairobi, Kenya, on May 10. Finalists for ISHOW USA, which will take place in Washington, D.C., on June 21, have yet to be selected. For more information on ISHOW India, a complete list of the ISHOW India finalists, and details on ISHOW Kenya and ISHOW USA, visit the competition’s website at https://thisishardware.org.