Students Face Off During Lively Robot Football Finals at IMECE 2018 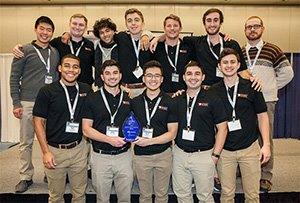 The team Chain Chomp from the University of Florida took top honors at the ASME Student Design Competition Finals at IMECE 2018 in Pittsburgh, Pa.

Fourteen teams of ASME student members from universities around the globe took part in the final round of the 2018 ASME Student Design Competition (SDC), which was held on Nov. 11 at the ASME 2018 International Mechanical Engineering Congress and Exposition (IMECE 2018) in Pittsburgh, Pa.

During the Student Design Competition Finals, as in the earlier regional SDC events held at the ASME E-Fests during the spring and summer, teams of engineering students led their robots through raucous rounds of this year’s SDC challenge, Robot Football — a four-way game of football (or soccer, as it’s known in the United States) during which teams attempted to score goals against other teams while trying to defend their own goal.

The 14 student teams, who had either competed in or registered for the regional ASME E-Fest SDC events, spent the better part of the day trying to score points and dominate the Robot Football playing field during several spirited preliminary matches and semi-final rounds at the David L. Lawrence Convention Center. That afternoon, teams from the University of Florida, Hong Kong Polytechnic University, the University of Nevada, Las Vegas (UNLV) and Michigan’s Baker College of Flint had scored enough points to face off at the final match of the day. 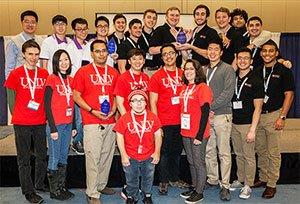 When the results were tallied, however, it was the team named Chain Chomp from the University of Florida who claimed first place at the Student Design Competition Finals. The team, who had racked up nearly three times as many points as the runner-up, received the $3,000 top prize, as well as $1,000 for their ASME student section. The University of Florida’s victory at the SDC Finals followed their first-place showing at ASME E-Fest East in April.

Rounding out the top three at the SDC Finals were the teams from Hong Kong Polytechnic University and UNLV. The Hong Kong Polytechnic University team, which was named Omega, took home the $1,000 second prize, plus $500 for their student section. Rebel Robotica from UNVL, who had been the winners of the SDC at ASME E-Fest West in March, placed third at the SDC Finals in Pittsburgh, receiving $500 and an additional $250 for their student section. 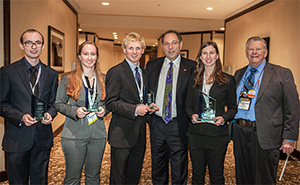 In other student competition news from IMECE 2018, five ASME student members were named prize winners at the Old Guard 62nd Annual Oral Presentation Competition Finals on Nov. 10. The competition is designed to emphasize the value of the ability to deliver clear, concise and effective verbal presentations, particularly pertaining to some sphere in which an engineer is or should be involved. The 14 students who competed at the finals at IMECE were the first- and second-place winners at the regional Old Guard Competitions, which were held at the four ASME E-Fests earlier this year.

Charlotte Kroc from the Milwaukee School of Engineering won the third-place prize and $1,000 for her presentation “Improved Assistive Lifting Device.”

Joseph Koch of the University of Delaware placed fourth at the finals with his presentation “Senior Design Project: Flex-Wall Trolley,” taking home $500.

Clark Rice of the University of Akron was selected as the winner of the competition’s Innovation Recognition award for his presentation, “Fracture Testing a Horse Hoof Inspired Biomimetic Structure,” and received $250.