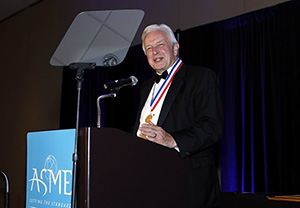 Richard Laudenat, the new president of ASME, discussed his goals for his term as the Society’s 138th president during the President’s Dinner on June 4 at the ASME Annual Meeting.
In his inaugural address earlier this month at the President’s Dinner at the Annual Meeting in Orlando, Fla., ASME’s new President Richard Laudenat shared some of his goals for his yearlong term as ASME’s 138th president and talked about the importance of the Society’s mission-based programs to ensuring a thriving future for both ASME and the engineering profession. 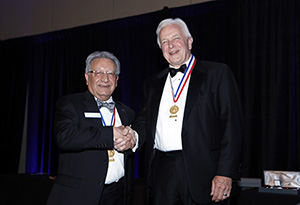 (Left to right) ASME immediate Past President Said Jahanmir congratulates new President Richard Laudenat at the President’s Dinner.
Laudenat stressed that ASME must continue to adhere to its mission and vision, continue to evaluate and respond to global trends, and persist in building upon and developing programs based on the five strategic technologies approved by the Board of Governors — robotics, bioengineering, clean energy, manufacturing and pressure technology — in order to position itself as a leader in innovation and global development.

ASME must also remain dedicated to encouraging diversity and inclusion, in both the organization and the wider profession, Laudenat added. “It is through an effective diversity and inclusion strategy that we will expand and excel in finding new and innovative solutions from within our ranks, while we build on a culture of acceptance, inclusion, professionalism and respect for all,” he said during the dinner, which was held June 4 at the JW Marriott Grande Lakes.

Laudenat went on to emphasize the significance of various ASME programs that support the Society’s mission, such as ASME Engineering Festivals (E-Fests), the INSPIRE digital STEM courses for middle and high school students; the Innovation Showcase (ISHOW) global competition highlighting engineering for social impact; Engineering for Change (E4C); and the ASME Early Career Leadership Intern Program to Serve Engineering (ECLIPSE), which offers early career engineers the opportunity to learn first-hand about ASME at the leadership level.

“It’s essential that we understand the values that our mission-focused programs bring to ASME,” Laudenat said. “We also need robust and scrutable ways to measure and evaluate them.” To that end, ASME has begun the first stage of a new Social Return on Investment (SROI) initiative, which will enable the Society to measure the long-range impact of its social responsibility initiatives. 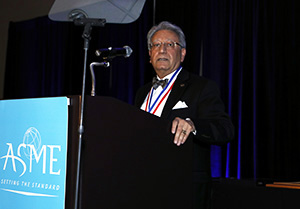 During his speech at the President’s Dinner, immediate Past President Said Jahanmir touched on some of the endeavors that had taken place during his term.
Toward the end of his speech, Laudenat identified several strategic areas in which he hopes the Society continues to make strides during the coming year. These include developing a persuasive membership proposition to increase the number of active ASME members, particularly early career engineers and students; encouraging collaboration between ASME’s volunteers and staff; and upholding the Society’s current standing in standards and conformity assessment, conferences and events, technical publications, student competitions, honors and awards, and other areas.

One of the most promising opportunities for ASME, Laudenat continued, was in Learning & Development. “ASME is beginning a transition from a traditional knowledge organization to a learning organization,” he said. “Think about the possibilities here for ASME and the new generation of learners entering the engineering profession each year. Together we can accomplish so much, resulting in transformational impact for engineers in every corner of the world.” 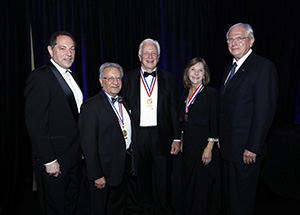 (Left to right) ASME Executive Director/CEO Tom Costabile, immediate Past President Said Jahanmir, ASME President Richard Laudenat, Past President Charla Wise and President-Nominee Bryan Erler at the President’s Dinner.
Earlier in the program, 2018-2019 President Said Jahanmir looked back at some of ASME’s accomplishments during his presidential term, citing such examples as the development and imminent launch of a new and improved ASME.org website; the publication of 13 new standards and 30 updated standards; the addition of the 31st ASME journal, the ASME Journal of Engineering for Sustainable Buildings and Cities, which will launch next year; the success of ASME educational outreach programs including INSPIRE, ASME Engineering Festivals (E-Fests) and EFx, which reached more than 122,000 K-12 and university students; the presentation of more than $350,000 in scholarships to students to help ensure the future of the profession; and the Society’s continued promotion of professional development by providing education and training to thousands of people through more than 300 live technical courses and e-learning opportunities.

Jahanmir also discussed some recent organizational structure changes that support a renewed focus on membership, students, sections and divisions. These changes, based on recommendations from the four Presidential Task Forces and approved by the Board of Governors at its April meeting, include the formation of the new Member Development and Engagement (MDE) Sector to provide governance for sections, student sections and membership development; and the renaming and restructuring of the Technical Event and Content Sector, which will now be known as the Technical and Engineering (TEC) Communities Sector.

“These are just a few examples of what we have accomplished together,” Jahanmir said. “This is a true confirmation of what we can do if we work together toward a common vision, disseminating technical information to improve safety and the quality of life. It has been a great year, and I promise you that next year will be even more successful than this year. We are on a path of continuous improvement and growth.”