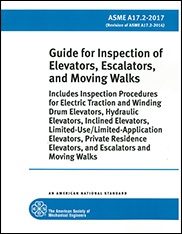 ASME recently published updated versions of two of its standards, which address elevator and escalator inspection and platform lift and stairway chairlift safety. The two revised standards are now available for purchase on ASME.org in both digital and print editions.

The two updated guides are intended for anyone who is engaged in the safety of elevators, escalators, moving walks, platform lifts and stairway chairlifts and involved in the following areas: installation, operation, testing, maintenance, alteration and repair; inspection; property, facilities and plant management; and education and public reference.

The first new update, ASME A17.2-2017 Guide for Inspection of Elevators, Escalators, and Moving Walks, covers recommended inspection and testing procedures for electric and hydraulic elevators, escalators, and moving walks required to conform to the Safety Code for Elevators and Escalators, A17.1-1955 and later editions, including A17.3-Safety Code for Existing Elevators and Escalators. The guide also addresses some requirements from editions of A17.1 published prior to 1955. 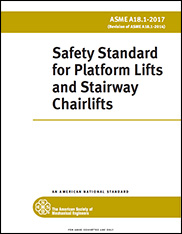 This 2017 edition provides updates, cross-references and additional guidelines to coordinate with A17.1-2016/B44-16. It features new auxiliary power lowering operation inspection rules for hydraulic elevators, and inspection procedures for an escalator’s skirt obstruction devices as well as its plunger grippers. A new non-mandatory “Appendices Checklist for Occupant Evacuation Operation (OEO)” and a new non-mandatory appendix that includes examples of suspension member tension measurement data and calculations for adjustment have also been added.

The second new standard update, ASME A18.1-2017 Safety Standard for Platform Lifts and Stairway Chairlifts, deals with the design, construction, installation, operation, inspection, testing, maintenance and repair of inclined stairway chairlifts and inclined and vertical platform lifts specifically intended for the transportation mobility-impaired people. The device should have a limited vertical travel, operating speed, and platform area, and its operation should be under the continuous control of the user or attendant. The standard covers devices that pass through no more than one floor of a building and do not have a full passenger enclosure on the platform.

The new edition of the standard provides an addition to the section on the engineering testing of safeties employed on inclined platform lifts and inclined stairway chairlifts. It also features new requirements for relocatable lifts as well as a new section on the maintenance of platform lifts and stairway chairlifts, including a Written Maintenance Program (WMP/MCP). The standard now includes revisions for devices that have an optional construction, which permits a manufacturer to minimize the overall width of the lift while maintaining the required platform width. The standard’s sections on emergency signals and audio alarms sections have also been updated.

To order a copy of ASME A17.2-2017 Guide for Inspection of Elevators, Escalators, and Moving Walks for $195, visit here. Copies of ASME A18.1-2017 Safety Standard for Platform Lifts and Stairway Chairlifts, which cost $98 apiece, can be ordered at here.